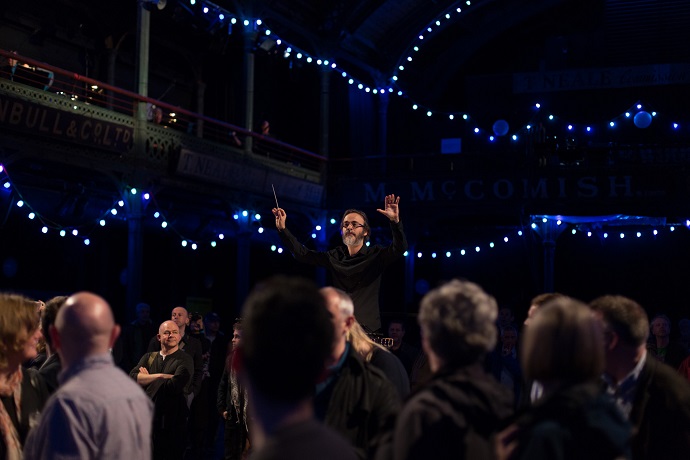 Tectonics Glasgow, a festival of niche and experimental new music presided over by curators Alasdair Campbell and Ilan Volkov, takes place entirely within Glasgow City Halls. Volkov, who leads the BBC Scottish Symphony Orchestra, likes to push the festival’s commissioned artists out of their comfort zone, notably in the form of site-specific spatial pieces. Alvin Curran, a composer well versed in site-specific performance, gave a performance of Musique Sans Frontières, which involved herding the audience through every part of the City Halls, with blistering collisions of sound from bagpipes, the Glasgow Improvisers’ Orchestra, Kirkintilloch Brass Band, Glasgow Chamber Choir and the BBC Scottish Symphony Orchestra itself. The composer’s guiding presence – by turns playing the horn, bouncing a basketball and pushing a chair – was something special, even if some audience members were put off by the noisy proceedings.

Words and theatricality were another prominent part of Tectonics 2016, exemplified by the seething spoken-word noise-rock of Andy Moor and Anne-James Chatton. Elsewhere, Ivor Kallin’s wild vocalisations and viola brutality formed part of a trio with Alasdair Roberts and Alex Neilson, while in Afall / Trauma, by Moss Moss Not Moss, the use of hockets and game-like processes suggested that the nature of identity and communication were being probed.

Less assured was Fruitmarket, a piece written by Catherine Kontz for the City Halls’ Old Fruitmarket. Percussionists were lined all around the gallery to simulate market vendor calls from around the world, but the performance lapsed into cliché and struggled to keep afloat. Later that evening in the Grand Hall, the fine ideas in Jessika Kenney and Eyvind Kang’s Concealed Unity were let down by a lack of focus and the demands of conducting dispersed groups of musicians. The programme presented at Tectonics is undeniably challenging, but it is so singular a festival and so much fun that it deserves all the support it can get.