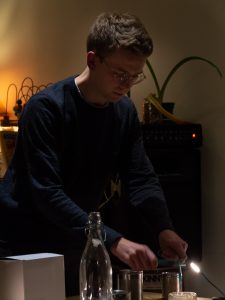 Gregor Forbes (b. 1993) is a composer and pianist from Scotland. Since 2014 he has been the Artistic Director of Glasgow Experimental Music Series, which was twice nominated for ‘Making It Happen’ in the Scottish Awards for New Music. In 2019, Gregor was the inaugural recipient of the Scholarship and Composer-in-Residence programme of the Hanns Eisler Haus, Leipzig, which culminated in the performance of a major new work for Ensemble Avant Garde at the Gewandhaus Musica Nova series. Since 2021, Gregor has been the Musical Director of the composers’ lecture-recital series ‘Neues bei Grieg!’ at the Grieg Begegnungsstätte, Leipzig. Recent compositions include ‘Diffuse Planes’, commissioned by guitarist Martin Steuber, and ‘Cançoes de – ‘ for voice and piano, commissioned by soprano Filipa Portela.