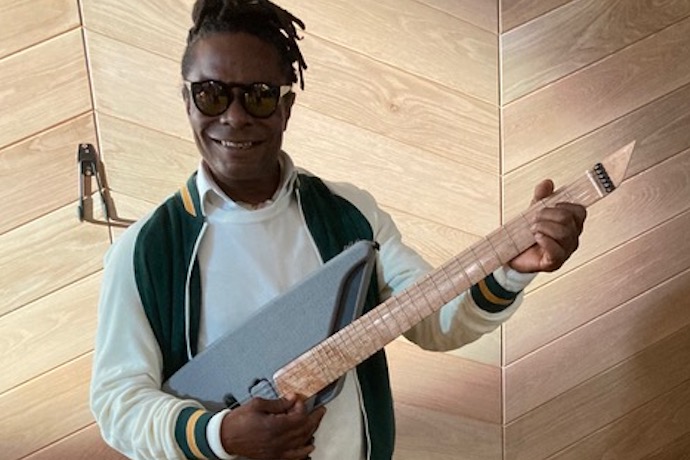 Frieze means deep pockets, stamina, an open but cautious mind, and comfortable shoes.  Nearly three hundred galleries from 42 countries and work and objects spanning the prehistoric to the contemporary. The problem with this split-site art fair is not just the sheer scale, but the range and quality of the experience at Frieze Masters, where some of the most compelling exhibits are not art at all. Hard not to be bowled over by an actual four metre long Camptosaurus Skeleton (Upper Jurassic c154 million years ago), or, equally, by a set of exquisite feathered falconry hoods in Global Exchange ,a section spanning centuries and cultures curated by Luke Syson, Director of the Fitzwilliam Museum Cambridge. The quiet contemplation of such marvels is a welcome distraction from the hype and acres of ultra new ‘wet painting’ at the other Frieze: hot ticket works by young, mainly women artists such as Jadé Fadojuimi at Gagosian, which sold out before the fair opened. This market is undoubtedly a hedge against the current financial downturn but whatever the brio and confidence of some of the work, it is over-heated – bad for art and for these artists.

Away from these fireworks, it is a relief to find Gypsum’s Berlin-based Mahmoud Khaled’s  For Those Who Can Not Sleep 2021, a room installation with a circular black leather bed, a small framed print, A Glove- Anxieties, by the symbolist Max Klinger 1881 and a haunting soundtrack: Kay’s theme by David Julyan. A poem to exile, loss and displacement.

Review of Frieze and Frieze Masters 2021

At Indra’s Net, curated by Sandhini Poddar, are works addressing universal concepts of interconnectedness; a standout work of astounding delicacy and intensity is Turner Prize nominee Shirazeh Houshiary’s painting  Uncanny 2022. An intricate skein of fine pencil and pigment strokes, it is an almost embodiment of the unembodied, the insubstantial ‘I set out to capture my breath’. In an earlier work, Breath 2003, a four-channel video, she choreographed breath from four vocalists from four different heritages.

Luxury marques are the natural bedfellows of art fairs, but BMW’s Open Work collaboration with LA artist Nikita Gale is a surprise. Gale works with materials, light and sound. In 63/22 she transforms the corporate BMW lounge with five electric guitars designed by the BMW design team for their electric i7 model and custom-made by luthier Ian Malone.

The work is named after the Firebird, the Gibson guitar designed by car designer Ray Dietrich in 1963, which had wings like car fins. Each guitar is named after five legendary US women guitarists, such as Memphis Minnie and Big Mama Thornton. Gale asked that the designers considered the ergonomics of the bodies of players, not always white, male. She states the fact that early blues and rock songs glory in the freedom, the sexuality of speed and cars and refers to Amiri Baraka’s (LeRoi Jones) 1970 essay Technology and Ethos: ‘Nothing has to look or function (sound) the way that it does’.