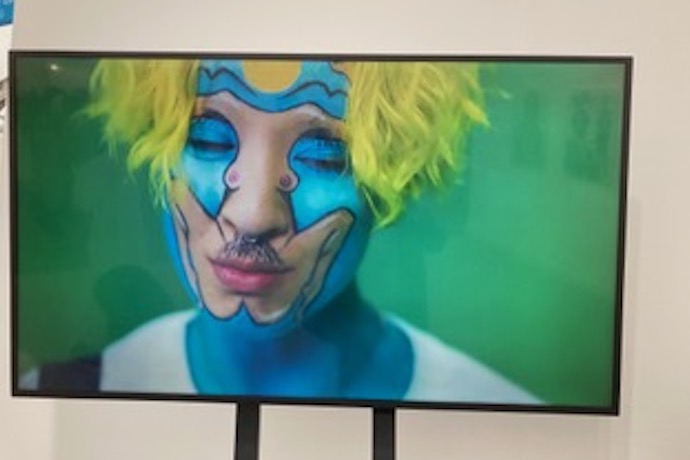 Most galleries needing quick sales, played safe so there were few unruly installations, edgy performances or interminable videos. These are not an easy fit with this multi-million $ trade fair dedicated to big ticket paintings and sculptures; but this year was unusually sedate.  There were subversive pieces such as Michael Landy’s  24ct  gold Essex Idol at Thomas Dane and Lévy Gorvy showed the assemblage ‘Prophet’, a homage to Jimi Hendrix by the late US artist musician Terry Adkins, whose quest was ‘to make music as physical as sculpture might be’. While the Fair was truly international, with more galleries and artists from the east and the global south, even the most political work, such as Deborah Roberts paintings of black children at Stephen Friedman, was reflective, poetic and poignant.

A stand out was AKA, a multichannel video installation by award winning US artist filmmaker, Garrett Bradley at Lisson, with soft-focused colour, a dreamlike soundtrack of children, birdsong and talk, ‘are you colour struck?’. Mother and daughter stand, back to back, hands entwined, unveiling the ambiguous dynamics in mixed-race families. Sonia Boyce’s Exquisite Tension, 2005, at Simon Lee, is a 4 minute video and soundtrack of a black girl and a white boy whose hair is tightly braided together by the artist. Boyce will represent Britain at the Venice Biennale next year.

Noisier and in your face, was ‘It’s Always You’ , the dual channel music video and lifesize cutout figures by Sin Wai Kin (aka Victoria Sin) presented by Hongkong’s Blindspot Gallery.  With karaoke lyrics and a fright wigged clown face, Sin gives the full on 1990s’ Boyband girl boy hit.  You could recover at Almine Rech with Dial-A-Poem 02045388429 by the late US poet John Giorno, who was the subject of Andy Warhol’s renowned film, Sleep.

Frieze’s Director, Eva Langret, aimed at a wider and younger audience with Frieze Live, an online programme of three performances curated by Languid Hands,  the collaborative duo of artist Imami Robinson and DJ and filmmaker Rabz Lansiquot.  Rebecca Bellantoni performs Condition the roses, accept the vision C.R.Y, a memoriam to her grandmother, part of her multidisciplinary project Concrete Regenerative Yearnings exploring the impact of the city on our lives. Ashley Holmes invokes the black musical tradition of blues, Reggae, Rocksteady and Dub, while Ebun Sodipo focuses on the black trans-feminine body.

Down to earth was Noémie Goudal’s Below the Deep South at Edel Assanti , a staged photo film and soundtrack of rainforest bursting into flame , the first of a series, Post Atlantica, in artistic dialogue with paleoclimatology.  It was a good opener for the master piece which resonated most : at Frieze Masters was One Hundred Seconds to Midnight, from a collection of 800 works focused on climate and the earth –  books, charts, maps, photographs , from the 15th century  to now, all pristine, curated by Emma Walshe for the London antiquarian book seller Peter Harrington. See the film by John Ruthven, of Blue Planet, at www.OneHundredSecondsToMidnight.co.uk. Priced at £1.65m, it is a snip.