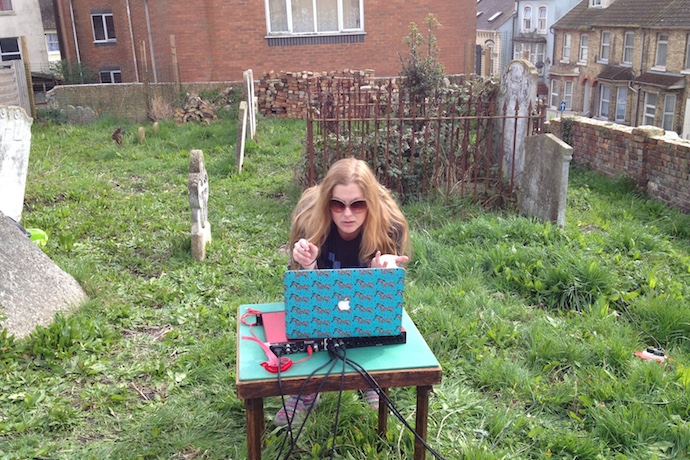 No one I asked knew exactly how to direct me to Folkestone’s Baptist Burial Ground, the site of Emily Peasgood’s interactive sound installation Halfway to Heaven. Such is the nature of the space lying some 55-feet above a quiet residential street and totally unused for almost 150 years. You have to climb up a narrow enclosed staircase towards an opening that appears as a square of white light. Half-heard ethereal voices from the composition above echo gently until the passage opens out onto a small overgrown graveyard. Entering the site, I felt that Halfway to Heaven was a a particularly fitting title.

The installation itself, which gives voice to Folkestone’s forgotten Baptists, is made up of a set of gravestones. In front of them stand speakers, which are triggered by the presence of a viewer. The five-part choral work that emerges is delicate and airy, complementing the open elevated environment. The voices gradually draw together in polyrhythmic harmonies. The result is hauntingly melancholic – a poignant reminder of how these non-conformist believers were outcasts in their own times.

During the chanting sections, each gravestone introduces a vocal part centred around the lives of the individuals buried in the plots. Wandering between the stones, other audience members stir up overlapping sounds with their movements. The experience becomes tangibly communal. To hear the piece in all its parts the audience themselves collaborate by standing at each gravestone simultaneously. This adds a layer of fun but also engages with the Baptist’s rejection of the hierarchy of the Anglican Church, as they instead advanced equal respect for all.

It is this grounding in the lives and beliefs of the individuals interred in the Burial Ground that lends the piece an emotive resonance. Peasgood did some thorough research to uncover the stories of the inhabitants, working together with the current Folkestone Baptist Church and even a living descendent of one of the buried figures. The piece becomes an acknowledgement of the space and the people buried within, evoking a sense of presence that does not fade even as the voices fall silent.

Halfway to Heaven is part of the 2017 Folkestone Triennial and continues until November 5.