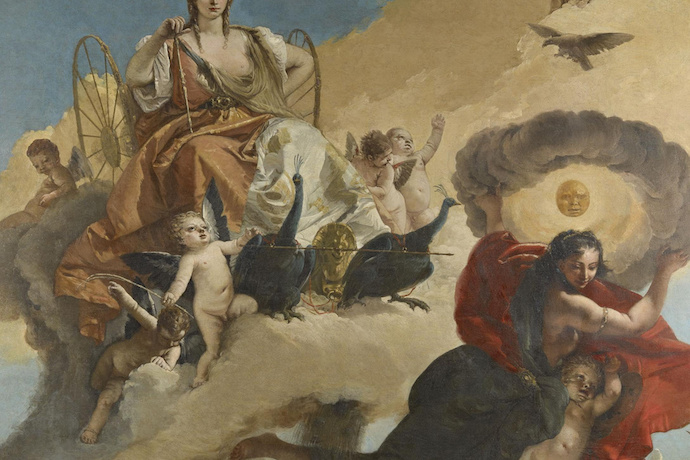 Giovanni Battista Tiepolo’s Juno and Luna, between 1735 and 1745

You can’t be in Venice long before noticing the conspicuous presence of Giovanni Battista Tiepolo. His art pervades the city—within its many cathedrals and galleries you will find frescoes, paintings, and altarpieces of the most dazzling variety. And while the Rococo grandiosity of the Venetian masterpieces cannot be denied, it is Tiepolo’s comparatively humble etchings which have piqued the imagination of the composer Roberto Rusconi in his new work, Variazioni Tiepolo.

Tiepolo only produced two sets of etchings in his lifetime: the Capricci, made up of ten sketches, and the Scherzi di Fantasia, made up of twenty three sketches. The Scherzi, more so than the Capricci, represent Tiepolo’s mastery of the medium. And it is the Scherzi that provide the inspiration for Rusconi’s two themes and thirteen variations for solo violin.

Each sketch of the Scherzi ranges wildly in theme and subject. One might depict a scene where, exhausted, a mother and child, along with their faithful animals, take refuge from the harsh desert sun. In another, you might see Death reading a book to a group of wide-eyed onlookers. The sketches are, after all, scherzi: ‘playful things’. Their enigmatic allure confounds easy interpretation—though their lack of explanatory frontispieces, and their creator’s avoidance of reflexivity, may be partly to blame.

For a composer whose preoccupations include ‘life, death, birth, rebirth, transformation, transfiguration, metamorphosis and initiation’, Rusconi’s affinity with Tiepolo seems apt. Themes of this nature lurk behind every shadow in the Scherzi, as well as his oeuvre more widely. But unlike his other works, which were painted on demand for rich patrons and the Church, the sketches of the Scherzi afforded Tiepolo the space and time to explore his craft in a freer way than his formal commissions did—bizarre and fantastical, they are a far cry from the Madonna and Child frescoes of the Santa Maria del Rosario. 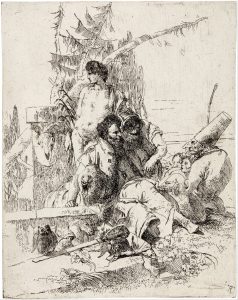 So, how does one transform these images into sound? Rusconi ventures back to the time of Tiepolo to explore that question. The concept of alchemy structures the work, while the concept of sprezzatura—the art of performing a difficult task so gracefully that it looks effortless, an art greatly prized in Renaissance Italy—provides the virtuosic impulse behind the music and instrumentation (variations for solo violin with scordatura).

Alchemy, the arcane art of purification, had as one of its goals the creation of an elixir of life, through a process known as the Magnus Opus. The process takes on four stages: Nigredo, Albedo, Citrinitas and Rubedo. Each stage pushes the budding alchemist closer toward their goal of an ideal form. In some ways, Rusconi reminds me of our imagined alchemist. He says, ‘every performance is a step forward, (toward) the impossible act of achieving perfection.’ And again, ‘Music is not science, music is emotion, music is creativity running wild… Music is what can tie us back to forgotten rituals, mysteries, ceremonies, initiatory practices.’ If they aren’t the words of a musical alchemist, I don’t know what are.

In Variazioni Tiepolo, however, the four alchemical stages take on a structural and symbolic significance. On a structural level, they split up the work and its sets of variations into discrete moments. The Minguet Quartet’s two violinists, Anette and Uli, will each perform two of the stages; Anette will perform the first and fourth set of variations (Nigredo and Rubedo), while the second and third set will be played by Uli (Albedo and Citrinitas).

Symbolically, the alchemical process represents a journey toward expressive purity. The music is virtuosic and technically demanding, flitting from microtonal glissandi to demanding double stops with little warning. I imagine, executed correctly, the struggle of the violinists to achieve the composer’s intentions—coupled with the possibility of a mistake awakening the audience’s latent schadenfreude—will become in itself a kind of transmutation toward perfection.

It will be interesting to see how the concept of sprezzatura is used by Rusconi. Tiepolo, according to writer Roberto Calasso, was a master of sprezzatura—that uniquely Italian concept of nonchalance, so highly regarded in artists of the Renaissance. Perhaps, just as the sketches of the Scherzi provided Tiepolo with the chance to escape the formal boundaries imposed by his larger works, Rusconi’s sprezzatura quality will be revealed by the inventive rigour displayed in his economical approach to composing shorter variations. Writing for a solo instrument, with its limited tonal and expressive possibilities, will also provide a litmus test of his ability to show off, without obviously showing off.

If Rusconi follows Tiepolo’s lead closely, I’m certain he will achieve sprezzatura. However, a 21st century audience is not an 18th century audience, and it remains to be seen whether the audience will pick up on this quality at all. What is undeniable is sprezzatura’s important place in any modern reappraisal of Rococo art—for that attention to detail, Rusconi should be applauded.

Giovanni Battista Tiepolo asserted the rights of the imagination and freedom of expression in art. His defiant anti-rationalism places us in a zone where the world of the ancient past rubs up against ours, vibrant and present; where the preternatural worlds of myth, allegory, and religion coexist. So, when Rusconi reminds us that, ‘Music can and should allow us to reconnect to what we have left behind’, and, ‘Sound and aural perception have for millennia allowed us to explore realities behind the rational’, I feel confident that his interpretation of Tiepolo’s art will be both earnest and worth seeing.

The Minguet Quartet will perform the world premiere of Roberto Rusconi’s Variazioni Tiepolo in a concert at the Southbank Centre’s Purcell Room on May 17th 2019. The concert will also include performances of Haydn’s Quartet No. 67 and Beethoven’s Op. 131. You can purchase tickets here.