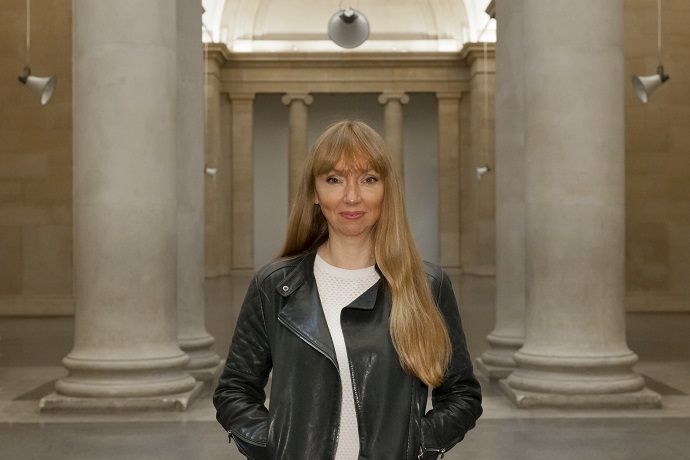 ‘At a concert there is a relationship between the performer and the audience,’ Susan Philipsz says. ‘In my work, the absence of the performer makes you concentrate on the space that you are in.’ As a Turner Prize winning artist, she is best known for her haunting sound sculptures that reverberate throughout unusual environments. Her unaccompanied and disembodied voice has been heard in locations such as a monastery in Spain, near the Acropolis in Athens, and in a Tesco Metro in Manchester. Yet her works are also exhibited by galleries: two new pieces can currently be heard at London’s Tate Britain and Austria’s Kunsthaus Bregenz.

The 50-year-old artist, who was born in Glasgow, has been singing all her life. As a child, Philipsz sang in a local Catholic choir with her sisters, and as a teenager she joined a militant-socialist African choir. However, Philipsz doesn’t read or write music, never having undertaken formal training. Instead, she studied sculpture at the University of Dundee and then at the University of Ulster in Belfast. ‘I was making sculptures that explored inner body space,’ Philipsz says. This fostered an interest in the physicality of singing, such as the way the diaphragm expels breath from the lungs. ‘I also began to think about the physicality of projecting my voice out into a space and filling that space with sound,’ she explains.

Space, for Philipsz, has remained a priority. Lowlands, which won her the Turner Prize in 2010, comprised recordings of the artist singing an old Scottish lament, installed under bridges that span Glasgow’s River Clyde. Her voice echoed around the desolate site, which usually hosts drug-deals and suicides, infusing it with poetic melancholy. Two years later, in 2012, Philipsz discovered a disused train station in Kassel, a German city devastated during WWII: ‘I was looking out into this open space where the trains used to come and go,’ she recalls. ‘I could imagine sound coming from a distance towards the platforms end.’

For this location, Philipszproduced an instrumental piece: Study for Strings. It is based on a piece of music composed by Pavel Haas in Terezín concentration camp, but while his is a contrapuntal composition, with jagged allegros framing a harrowing central adagio, Philipsz recorded only the viola and cello parts. What emerged was an eerie, atonal installation at the train tracks, in which mournful notes mingled with ambient birdsong.

And World War II continues to be a key theme for Philipsz, who has lived in Berlin since 2001. ‘It’s still so present in my everyday experience here,’ the artist says, ‘in the architecture, in the gaps and empty spaces of the city. There are memorials everywhere.’ This comes to the fore in her installation, War Damaged Musical Instruments, at Tate Britain, which was inspired by instruments salvaged from the Alte Münz bunker in Berlin in 1945. ‘They are extremely evocative objects,’ Philipsz says. ‘Brass and wind instruments broken in two, dented, flattened and mangled. They captured the destructive nature of war so perfectly that I immediately knew I wanted to work with them.’ For two years, she sought out similar instruments and recorded the military bugle call The Last Post being played on each. Now, the shaky and separated notes from these battered objects call across the otherwise empty Duveen Galleries. 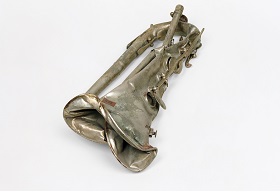 Battered and mangled: one of Susan Philipsz’s war-damaged instruments

Meanwhile Night and Fog, at the Kunsthaus Bregenz, makes a slightly more cryptic allusion to war. The title references Hitler’s Nacht und Nebel decree, by which political activists disappeared without trace. Philipsz recorded fragments of a score by Communist composer Hans Eisler, who was exiled from Germany by the Nazis, forcing him to spend many years on the move. The entire gallery resounds with melodic notes, a different instrument heard on each of the four floors. A fifth piece, a delicate flute part, exists off-site at the Jewish Cemetery in Hohenems, emphasising the themes of separation and absence.

‘I don’t see myself as overtly political. But I enjoy the opportunity to point towards figures who are political if there is something about their life that also moves me,’ Philipsz tells me. ‘It’s my way of letting people know about these characters and bringing their lives to the fore; my way of drawing attention to them.’ She describes it as a ‘real pleasure’ to discover Eisler: ‘He was such a great example of an artist who is practising at the highest level and at the same time being committed to social change. Choosing to place my work in public space is my way of making those ideas available to as many people as possible.’