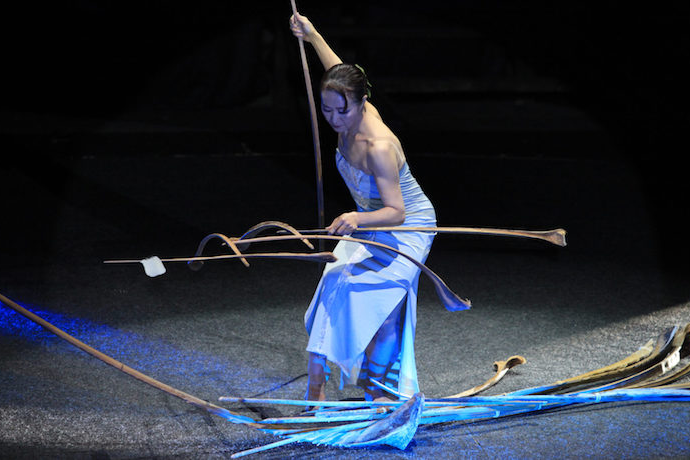 In practice, several different priorities crashed into each other. The palm branches for the Sanddorn Balance were on the platform from the beginning, depriving Ticciati of a sensible place to stand for John Dowland’s Time Stands Still. He sat on the edge of the stage instead, which initially seemed both appropriately playful and solemn. However it severed the connection between him and the pianist, Víkingur Ólafsson, and left him stranded when the programme progressed without breaks to the solo piano works, Satie’s Gymnopédie No.1 and three of Philip Glass’s Twenty Etudes. A clumsy stage move for the Sanddorn Balance then wrecked any sense of continuity. Shida Rigolo’s slow and mystical balancing of sticks to create a huge, fragile structure was breathtaking, and well-served by Arvo Pärt’s Spiegel im Spiegel until the piece stopped long before she had finished, and had to be awkwardly restarted to cover the rest of the act.

Another meditative grouping started the second half: Ticciati’s own Suspended, John Cage’s 4’33”, and Webern’s Four Pieces for Violin and Piano Op.7, again performed without breaks. A clear stage allowed Ticciati to stand in his normal place, resulting in a more successful collaboration with Ólafsson. However, the mood then abruptly switched to solo piano recital, with all-repeats performances of Bach’s A minor variations BWV 989 and Brahms’s Piano Sonata No.3. The audience, whose attention had already stretched by the contemplative works, were still just about up to the Bach, but could not handle a forty-minute Brahms sonata as well. Walk-outs began in the third movement, and increased towards the end of the final fifth movement.

The whole concert felt poorly prepared, emphasised by occasional rough edges in the performances (slips of pedalling or tuning, etc.) and a lighting malfunction during the Cage. Ticciati’s innovative programming ideas should be encouraged, but he will do himself no favours if he continues to handle them so haphazardly.

For more events in the Time Unwrapped series at Kings place, visit kingsplace.co.uk.