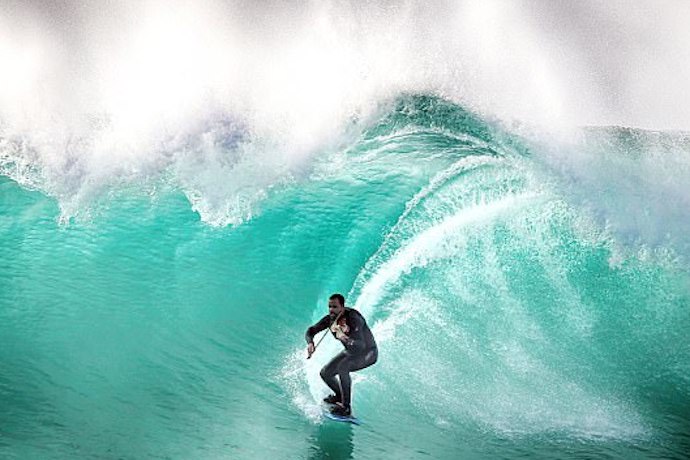 Surfing has always suggested a kind of daredevil mentality – a tiny man riding a towering wave is always going to be an impressive sight. Now imagine that this man is simultaneously playing a tune on the violin and you have a feat positioned directly on the intersection between jaw-droppingly cool and absolutely bonkers.

Nuno Santos has been doing this for more than ten years as part of his A Violin in the Most Unlikely Places project, which also involves tuning up on mountain summits. Growing up in Nazaré, Portugal, home to the biggest wave ever surfed (by Garrett McNamara, clocking in at a staggering 78 feet), Santos was drawn to surfing early on. Harbouring passions for both music and sport, Santos, at 18, favoured a career in the latter, securing a PhD in sports science. He now combines teaching sports science at university with a career as a musician.

When you are in an extreme situation, everything you are as an individual comes to the surface: your fears, your concerns, your courage, your strength.

Santos found a way of improbably combining his interests while working for an NGO in Ecuador. ‘I was living at the base of a really high volcano,’ he remembers. ‘We would hike every couple of weeks to monitor the movements of the species we were studying. One day I decided to play my violin up there.’ The idea for A Violin in the Most Unlikely Places was born. When Santos returned home there were no mountains comparable to those in South America, but plenty of towering waves.

After meticulous preparation, Santos took to the unlikely marriage of surfing and violin performance quite naturally. ‘It clicked instantly,’ he says. ‘The first time I did I thought ‘this is so ridiculous, but it’s so fun!’’ Surfing the waves at Nazaré can quite literally be a matter of life and death, and that’s without the added musical element. But according to Santos, ‘it’s not a difficult thing to do. It’s just like driving and talking at the same time. You’re talking and a car stops in front of you – you’ve got to be expecting it and ready to react. On the wave I’m playing but I’m really focused on the world around me, trying to foresee the things that can go wrong.’ 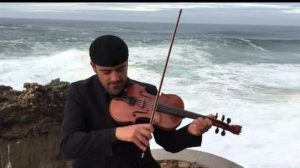 In a video which deserves to go viral, Santos can be seen playing a jolly rendition of Jingle Bells, before kicking out and laughing either from joy or relief that all has gone to plan. He is currently working on a rendition of Iron Maiden’s Fear of the Dark along with the Portuguese national anthem. ‘When I’m surfing I have thirty seconds so I can’t play a whole song,’ Santos explains. ‘As long as it’s a normal pop/rock cover I can do pretty much anything.’

You might expect Santos to be a madcap adrenaline junkie, yet he cuts a much more thoughtful and introspective figure. Though combining surfing and violin may appear outlandish, Santos takes it extremely seriously and is fully aware of the risks involved. For him the pursuit has much more than novelty value. ‘When you are in an extreme situation, everything you are as an individual comes to the surface: your fears, your concerns, your courage, your strength,’ he says. ‘It’s a very good way to know myself.’

One of the key disciplines Santos has learnt from putting himself in such extreme situations is believing in his abilities while not becoming hubristic. ‘Every time you start feeling arrogant on big waves you get hugely wiped out,’ he says. ‘On the other hand, you have to be very confident and believe in yourself. You’ve got to be sure you’re going to make it, otherwise really bad things can happen.’ This mentality of self-regulation and balance has informed his latest album Elements, five atmospheric pieces for violin, cello and piano (all performed by Santos) based on the ancient theory of the five elements (the fifth being the mysterious quintessence). The overarching theme that ‘every element should be in balance and all the elements should be in balance within themselves’ can’t help but call to mind Santos on his surfboard, minutely focused on the task in hand and balanced on the knife edge between self-belief and big-headedness. 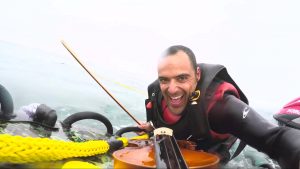 Now Santos is at work on another more electronic album, while continuing to risk his life with his violin on the Nazaré surf. While Santos wouldn’t have us all grab our surfboard and musical instruments to join him, he does believe that we can all benefit from introducing a controlled amount of risk into our lives. ‘Some people do big waves, others volunteer and help others,’ he tells me, ‘but I do think it’s essential for us to leave our comfort zone. Sometimes you find yourself to be better than you thought you were. I discovered that I was better at dealing with pressure than I knew.’ As he tunes up and prepares to face another gigantic wave, he can definitely say that again.