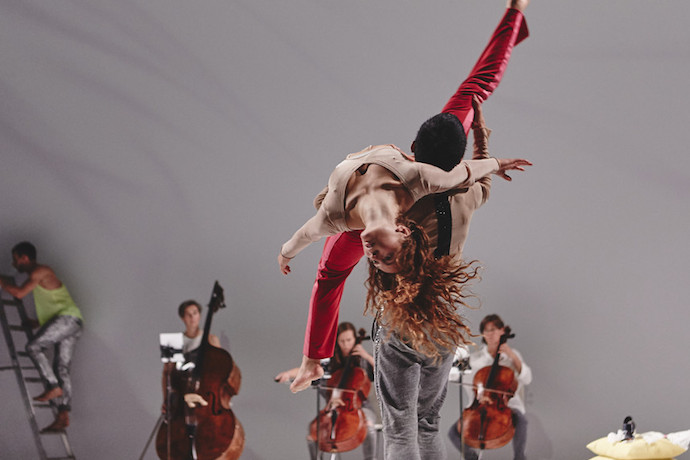 Having been steadily gaining a reputation for blurring boundaries between art forms and presenting classical music in a thought provoking and often surprising way, Scottish Ensemble is no ordinary string orchestra. When I chat to Fraser Anderson, SE’s Chief Executive since 2014 at their home in Glasgow’s Tramway, rehearsals are already underway for SE’s latest large scale collaboration. Arvo Pӓrt’s haunting 1977 work Tabula Rasa, written as a concerto for 2 solo violins, prepared piano and chamber orchestra, will take on a new, dramatic dimension, performed as a co-production between Scottish Ensemble and Glasgow theatre company Vanishing Point. Artistically, this collaboration, still being moulded and shaped, looks sure to result in an end product far greater than the sum of its components. The theatrical plot which unfolds to Part’s music, is inspired not just by the music itself, but by the piece’s power and legacy. Tabula Rasa has been documented to help bring peace and solace to patients suffering from terminal illness, especially cancer and AIDS, and the second and final movement of the piece Silentium was often called the ‘music of the angels’ by patients who listened to it. SE and Vanishing Point’s new drama is an exploration of the healing power of this work, and ultimately the power and absolute necessity of art to humanity.

Working and rehearsing with Vanishing Point has been a rewarding and inspiring journey for these musicians, for whom collaboration is an increasingly important part of their output. ‘The kinds of questions that can be asked as part of the rehearsal process can be quite different to what we would ask as a classical music ensemble,’ Fraser explains. ‘First of all, we have a much longer time period to discuss and explore different ideas. For us, it’s normally two days of pure music rehearsal then into a touring programme. But here we’ve more time to ask broader questions about the intention of this music and the feelings that it brings about in an audience: what do we want to say about it? And how can we communicate that to an audience?’ Adopting different techniques from practitioners of different art forms has been beneficial not just to those experiencing the final product, but also to the players, in their own artistic journeys. After all, it’s as important to challenge and inspire the musicians as it is the audience. 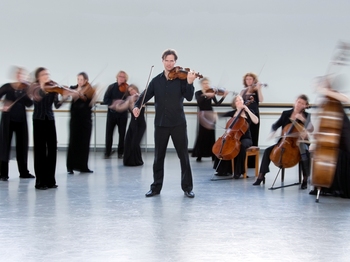 ‘As Chief Executive, that’s been one of the most rewarding things for me; to watch how [the players] have enjoyed and developed this different aspect of their creative personality… Classical musicians think very deeply about their repertoire and I think in these sorts of projects it gives them a different vehicle to express these ideas to an audience. I suppose what they’re doing is they’re expressing them visually, in a way that you wouldn’t normally do in a concert programme. So they’re participating in the narrative, or in the visual world that surrounds these collaborations. I think it’s about process – because with each of these different art forms or musical genres, their process is just different to ours. It’s interesting to have them rub alongside each other, and I think it helps both parties to reflect on their own processes.’ Some of SE’s players now meditate to Indian Ragas pre-performance, Fraser tells me, while others now do a physical warm up, after collaborating with the Swedish company Andersson Dance for a contemporary, choreographed performance of Bach’s Goldberg Variations in 2015.

This project – Goldberg Variations – ternary patterns for insomnia –  features again on this season’s bill, this time in the Shanghai Concert Hall and the John F. Kennedy Centre for performing arts in Washington D.C. Though this level of international touring is exciting and important for the group, just a glance at their calendar makes it clear that they have a strong commitment to their roots and to presenting performances to audiences in Scotland. The season kicks off with a celebration of Scotland’s national Bard, Robert Burns, with ‘Had we Never’, a performance presented in association with the Scottish National Portrait Gallery as part of this year’s Edinburgh International Festival. Combining music, words and painting, it features a new composition by Sally Beamish, as well as poetry from Scottish Makar Jackie Kay.

Less than two week’s after, they’ll swap the bustling city centre for the more remote shores of the Isle of Mull, for the first of their four residencies. Scottish Ensemble began conducting these residencies in 2012 as ‘an effort to build deeper connections with the places outside the central belt where we performed on a regular basis.’ says Fraser. ‘The reason for that was that we felt being there for either a day and a night, or even just that day and leaving again, was that we felt we weren’t able to build a relationship of any depth with the audience there’. SE strove to be more of a resource for these communities, approaching local authorities, hospitals, housing services, amateur music groups and youth groups and exploring how to make a music ensemble relevant to what they were doing. Since then they’ve played in pubs, supermarkets, schools and hospices all over Scotland.

As they embark on this upcoming season, it’s clear to see this is a group which is ambitious, daring and committed to artistic excellence, yet deeply in tune with the tangible and direct effects of art in society and communities. How fitting then is this year’s collaboration – a piece which fuses creative understanding to explore the mysterious yet simple truth of art being essential for the human soul.

The Scottish Ensemble performs Had We Never at the Scottish National Portrait Gallery tonight. eif.co.uk