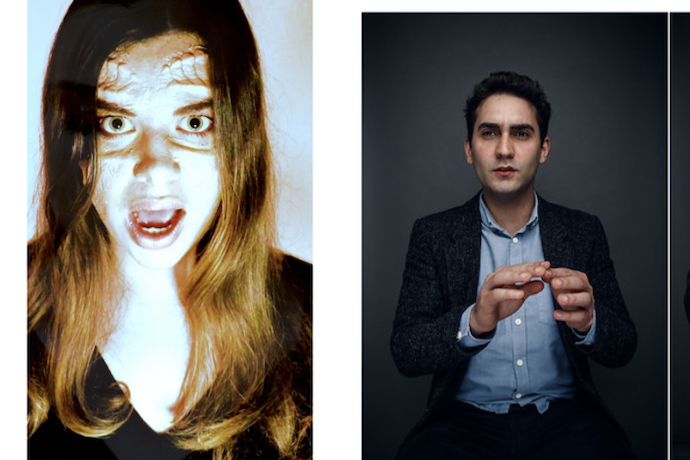 A new operatic solo work for mezzo-soprano is to premiere on Tik Tok on Halloween (31st October).
The work, by the contemporary classical composer Kemal Yusuf,  takes the form of what at first seems like a Tik Tok style talking head video, quickly descending into an audio-visual struggle between a person of two halves: ‘the night is in you’ and ‘you are there in the night’. Each version of the text has a different sonority, in seven-part harmony, and is made entirely from the voice of mezzo-soprano Stephanie Wake Edwards.
Yusuf, who is based in the UK, originally started out writing  traditional, linear pieces of music. He received his first large-scale commission in 2016 from the Norfolk and Norwich Festival: Cain, a 30-minute dramatic cantata. This was performed by the Bournemouth Symphony Orchestra, the NNF Chorus and soloists Jeni Bern, Christopher Diffey and Alexander Baker, conducted by David Parry. His setting of Psalm 91 has been performed by choirs around the country. The BBC Singers gave a live broadcast in a concert curated by Judith Weir. Other commissions include works for the BBC Singers, The Cheltenham International Music Festival and The Carducci Quartet.
Recently, however, Yusuf has developed a practice of filming his pieces and then fracturing them into thousands of clips. It all started during lockdown, when Yusuf started to record himself improvising at the piano. He treated the clips recorded as ‘blocks’ of material – much like Stravinsky’s early concert works – but took the idea much further, creating extremely fine clips (chopped recordings): what emerged were glitchy, playful start-stop piano videos.
In the last year Yusuf has started to develop a whole new practice around ‘glitch music’ where the music and video are melded into a single art form. He is now keen to explore new ways of reaching his audience, with the Tik Tok platform increasingly becoming a space where the composer is building a following.

Premiere details:
October 31 st 2022, 8pm UK time – Tik TokTo watch, download the TikTok app and then follow @kemyusuf to see the premiere live at 8pm UK time.https://www.tiktok.com/@kemyusuf?lang=enAlternatively to watch the piece after the premiere, the work will be available on YouTube shorts at this link: https://www.youtube.com/c/KemalYusuf