Recent research explores the use of complex technology to make musical instruments in antiquity, and establishes a statistical link between cave art and acoustics, new musical recordings recreating the soundworld of the past, including performances that mix these sounds with cutting edge electronica. 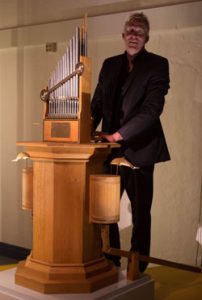 You might imagine that thousands of years ago, the most cutting-edge technology was used to make weapons, buildings, or hunting equipment. But recent research has shown how for millennia humans used some of their most sophisticated technical knowledge to make musical instruments. Researcher Rupert Till, a professor of music at the University of Huddersfield, has spent the last 10 years exploring this subject, and will blend the sonic technology of the ancients with cutting edge computer music approaches, to perform his new album Dub Archaeology at the Samsara music festival in Hungary this summer, under his stage pseudonym Professor Chill. 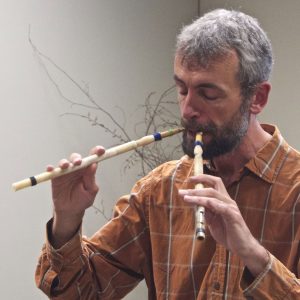 He explains that ‘one of the oldest musical instruments we know about is a 40,000 year-old flute made of Mammoth ivory, found in a cave in Germany. The people who made it had to split the tusk apart with little wedges inserted between its layers of dentine, to divide the long straight piece in half. Then they hollowed it out to make it into a bone pipe, and glued it back together again. That’s something that’s pretty hard to do today with modern tools, I can’t imagine how hard it was only using stone age methods.’

Flute-like instruments made from vulture and swan wing bones, which are naturally hollow, were also found in a nearby cave, both dated to same era. In 2017 the Caves and Ice Age Art in the Swabian Jura gained UNESCO World Heritage Site status, known for their early artwork as well as the oldest known human musical instruments. 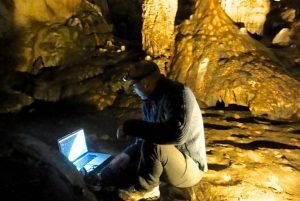 The prehistoric technology does not end there. It seems that prehistoric people using the entrances of caves like these as shelters had some appreciation of acoustics. A project led by Professor Chill statistically compared the positioning of ancient cave art with the acoustics present. Logistic regression analysis was applied, a complex statistical test that showed that there was a link; although this does not prove that the paintings were placed in response to sound, this does suggest an appreciation of acoustics existed as much as 40000
years ago.

The Dub Archaeology CD is out now on the Twin Records label.