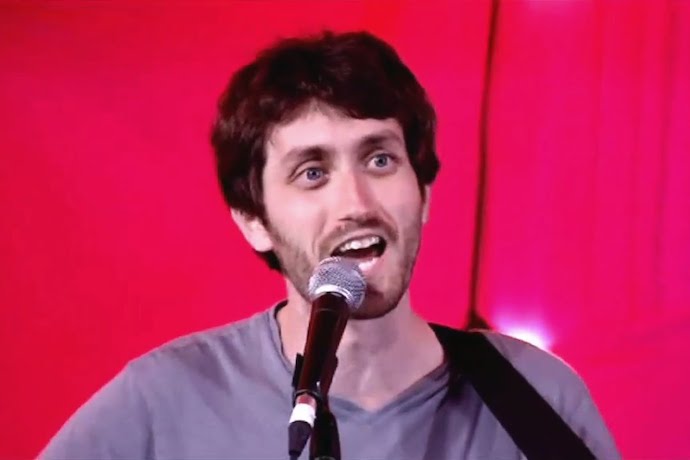 Jay Foreman’s musical comedy displays a deeper appreciation of composition than the ‘four-chords-will-do’ mentality exhibited by some of his peers. For Foreman, the two artforms best complement each other ‘when the music is in on the joke with the lyrics, or when it contradicts it so perfectly that it makes the joke funnier.’

To achieve that, Foreman uses a range of musical hijinks, particularly key changes and odd time signatures. In ‘Skin Sofa’, a song ‘about what it would be like to own a sofa that is upholstered by living human skin’, Foreman adopts the unconventional 5/8 time signature, mirroring the song’s surreal and repulsive subject matter through its awkward rhythm. Conversely, in ‘Slightly Imperfect Girl’, a sketch on the dropping standards of those who have been too-long single, Foreman ‘modulates up three semitones before climbing back down again, facilitating a jarring chord change’ that conveys the yearning and insincerity behind the line: ‘no one in the world would be happier with her than me.’

It is no surprise that Foreman ‘had a very musical upbringing’. His parents sang and played a variety of instruments and encouraged their children to do the same. Foreman still collaborates with his brother, internationally renowned beatboxer, Beardyman. ‘We were probably banging pots and pans to make music as soon as we came out of the womb’, he recalls. Foreman first started performing at York University open-mic nights, insisting his act was ‘exactly halfway between music and comedy’. Though he now considers his act closer to comedy than music, Foreman admits that he is ‘still not comfortable making jokes between songs because that is when you have to expose your real personality, whereas if you are playing a song you are protected behind the shield of your guitar.’

I hate it when a joke outstays its welcome. My sets are always littered with these one-liner songs.

His formative musical and comedic influences share the ability to experiment yet remain accessible. Artists such as Abba and Kate Bush may seem ‘like cheesy pop from far away, but they’ve got so many gifts for people who listen carefully.’ Foreman notes that ‘anyone can piss around with time signature and form and make it sound like arthouse bollocks, but Kate Bush managed to play with those things and still produce great, memorable pop songs’, singling out ‘Wuthering Heights’, with its 5/4 time signature and stark verse-chorus key change, as a case in point.

The Beatles and Monty Python – two acts that, according to Foreman, have much in common – best exemplify this blend of innovation and popular appeal. He admits to having ‘stolen wholesale from The Beatles many times,’ with the provocatively named ‘I’m Glad John Lennon Died’ deploying ‘a key change by stealth’ between verse and chorus, just like in ‘Penny Lane’. As for Python, Foreman particularly admires their abrupt endings to sketches. He explains: ’I hate it when a joke outstays its welcome […] My sets are always littered with these one-liner songs, and without exception the first one I do is ‘I paid my cleaner to kill my cat’ – a ten second ditty where the title is the punchline and indeed the whole song. 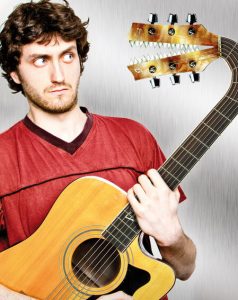 When writing new material Foreman pays as much attention to a song’s arrangement as he does its humour. ‘I make sure never to settle on either the lyrics or the music until I’m happy with both. Otherwise it’ll sound compromised and crowbarred.’ He elaborates, ‘I find it’s much better to write the music in my head, imagining an orchestra, or a full band or a genre I wouldn’t be able to recreate with just one instrument. The final challenge is to work out how to translate what’s in my head to acoustic guitar. That way, I end up with a much wider variety of styles.’

Despite this, the music rarely precedes the sketch idea. ‘Ideally I start with a catchy line or two, a couple of rhyming couplets I’m hellbent on. The scaffolding won’t be filled in until I’ve settled on a melody and I won’t settle on one until I’m happy with the other. The lyrics and the arrangement and the melody are all constantly changing until they all work together,’ Foreman reveals.

Off the back of his show, Disgusting Songs for Revolting Children, selling out two years running at The Edinburgh Fringe, Foreman is relaxed about the future. Though he is curious to test his capability of writing longer narratives and perhaps musicals, he has no current plans for a new show and tour (‘I need to get on that’, he says). He regularly contributes topical comedy songs to the radio programme, Not The One Show, and like many comedians, juggles various other jobs including presenting, guitar teaching and tour-guiding. Foreman is happy to stay with musical comedy as long as it sustains him sufficiently not to need a ‘proper job’ – when asked what he wants his audience to take away from his shows, Foreman was emphatic: ‘Merchandise.’