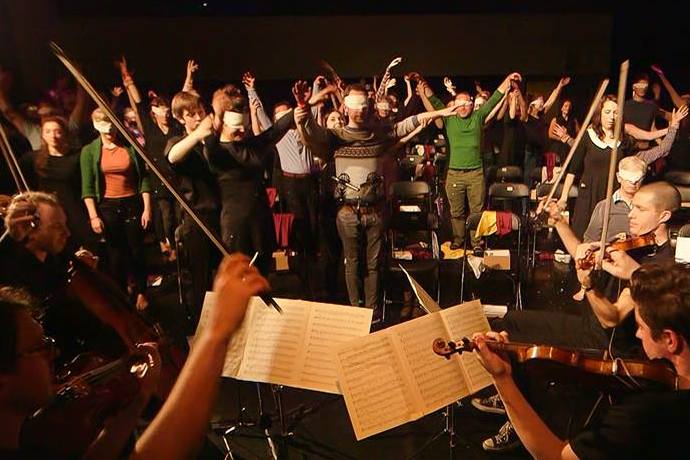 Although she describes herself as ‘not a synaesthete in the traditional sense’ (‘tasting’ sounds, ‘seeing’ smells and so on), BitterSuite founder Stephanie Singer has always had a multisensory relationship with music. ‘I remember when I was a kid listening to a concert of Stravinsky,’ she explains, ‘and seeing birds shooting around the concert hall, bouncing off the audience’s heads.’ And that, according to her, is what BitterSuite is all about – helping people delve deeper into the music, experiencing it in ways they haven’t been able to before. At their events, the audience is blindfolded and then guided by an individual ‘performer’ through a series of touches, tastes and smells all related somehow to the music.

‘A really good example of using other senses to enhance our understanding of things is the way we teach children to count,’ she says. ‘We don’t just tell them to count to ten, we give them something to count with.’ I wonder how clear the link really is. After all, listening and responding to music is more than a simple numerical task. I ask her if multisensory prompts really have that much to offer classical music. ‘Certainly!’ she says, and it becomes clear why. ‘I wanted to challenge the idea of listening to classical music as something that people do to relax. It shouldn’t be about getting home from a long day at work, taking off your heels and putting on Classic FM’s Relaxing Classics. I wanted to find a way to make the engagement more active.’ In a world where reality is frequently and increasingly augmented (take Pokemon Go, for example), it is vital that classical music keeps up with the pace.

Touch and the yearning for touch is a very powerful thing.

The concept of synaesthesia has, historically, referred to involuntary associations, not curated experiences. But some, Singer among them, argue that it can be helpful to think in broader terms: ‘Charles Spence, Barry Smith and Ophelia D’Ory are all prominent synaesthesia researchers who now are investigating whether the word should apply to repeated experiences of the same sensory combinations.’ But how does she decide what those combinations should be? ‘I do have a spreadsheet of established mixed-modality sensory experiences,’ she explains, ‘but I don’t treat it as a kind of prescriptive bible.’

Often there are obvious associations: percussive, or smooth sounds, for example, both have clear parallels in touch, and these are often featured in the group’s performances. But what about tastes and smells? Often, she says, they evolve gradually, as they did, for example, when BitterSuite was preparing a performance of Debussy’s String Quartet. ‘We worked with a couple of perfumiers to find out what kind of scents we wanted to use with the quartet and, completely accidentally, through layering the scents for each movement, ended up with a scent called ‘mitsuka’, which is what fashionable Parisians in the 1890s used to scent their curtains with,’ explains Singer. ‘We were able, just by chance, to let the audience breathe the same scent Debussy would have done when he was writing the piece.’ 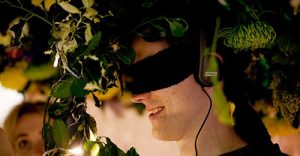 Audiences are blindfolded during performances

Interestingly, Singer has never incorporated visual stimuli into her multisensory experiences. ‘Culture is already very visually dominated,’ she says when I ask her why, ‘so it’s something I’ve tried to avoid.’ It is touch that interests her the most: ‘your skin is your most sensitive organ. It fires when there’s someone else near to it. Touch and the yearning for touch is a very powerful thing.’ This preoccupation with tactile experiences led the group to collaborate with Sense UK, a charity that works with deaf and blind people. ‘Our work already drew on therapeutic practice, especially in the areas of dance therapy and musical massage. Someone involved with events programming for the charity came to a performance we did of the Debussy string quartet and it developed from there.’

The result was ‘Performing Sensory Immersion‘, a collaborative and accessible piece funded by the Arts Council. The five multi-sensory-impaired artists it brought together used the ways in which they themselves communicated to immerse the audience in a world from the perspective of someone with sight and hearing loss.

So what’s next for Singer and BitterSuite? As well as a performance based around Leoš Janáček’s first string quartet, ‘Kreutzer Sonata’, which will take the work’s distinctive musical use of speech patterns as a starting point for engaging the other senses, Singer also plans to offer her multisensory services to young composers and ensembles as a way of helping them engage with audiences. ‘Sometimes it can be really, really difficult to persuade people to actually get up and go to a concert,’ she says. ‘You need to find a way of making going to that concert completely indispensable.’ That’s where BitterSuite comes in: ‘you can’t record a sensory experience like ours in the same way you can film a concert. The experience is unique.’

Bittersuite is performing at the Wilderness Festival, August 4-7