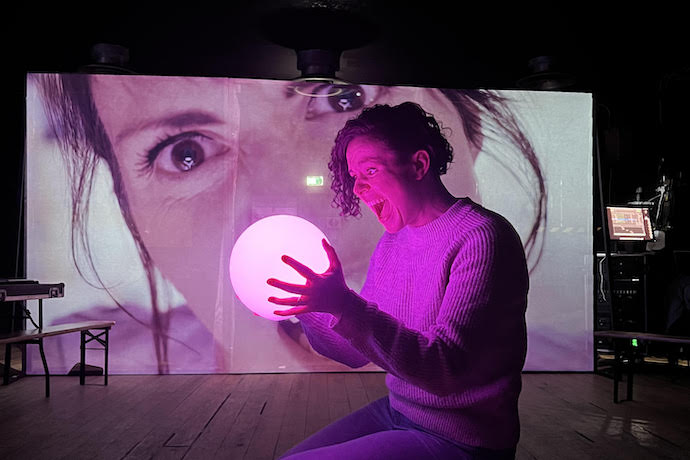 Running from 6-14 April at the Brixton Jamm, the Opera Story’s new production Beauty and the 7 Beasts  – a mash-up of Beauty and the Beast and 7 Deadly Sins – is about a dating app which promises love in 7 dates.

Each date (in a pre-recorded performance) is seen on a screen so that the production will be part live and part performed digitally – this was specially designed to allow for flexible performances in a socially distanced manner.  There are seven composers and librettists directed by lead composer Vahan Salorian and lead librettist Dominic Kimberlin. In this blog, Vahan Salorian describes the motivation behind writing the opera.

You could say one of the few upsides of these modern times has been the normalisation of catching up remotely. A chat that once might’ve required a trip into central London, over an overdraft-inducing latte or two, can now be whacked onto Zoom with a can from the shop.

Myself and Dominic Kimberlin (lead librettist on Beauty and the 7 Beasts) had previously collaborated with The Opera Story during lockdown, contributing to their RPS award winning series of online opera shorts, Episodes, and it was exciting to be working with such a dynamic and forward thinking company once again. In our first meetings with Hamish Mackay (Creative Director of The Opera Story) it seemed like we were all interested in creating a multimedia opera exploring the new virtual dating terrain that had been formed from the outlawing of intimate contact with strangers.

I will say at this point that this opera is absolutely not a COVID/lockdown themed piece by the way, it was just our starting point!

Despite the frustrations of government enforced celibacy, I had managed to avoid dating apps. I had a few friends who’d attempted a Skype soirée or two, but had yet to hear of any success stories… (no spoilers). The plan was for Beauty to go on seven of them, for each date to be created by a different pairing of creatives and for Dominic and I to create intermittent segments throughout the show as well as the Prologue and the final date, Pride (apparently the worst of all the Sins).

Within our interlude sections, it was important to solidly establish the character and musical themes of both Beauty and Beast. When writing theatrical music like opera, I’ve often relied on themes and motifs to carry a character through a show, so this fit well with what I was used to. The other composers and writers were then welcome to take however much they liked from those materials and integrate them into their scenes. Many of the dates feature nods to Beauty’s theme or the Magic Mirror jingle, and this hopefully keeps some cohesion through the show while also allowing each composer to fully express their own musical language. This is hopefully a real strength of the opera. While we all write tonal music, all seven composers have very different voices. The selection of composers includes Lucie Treacher and Lewis Murphy, who both composed part of the first ever Opera Story production, Snow (2017), as well new voices to the company Sasha Scott, Ruth Chan, James Garner and Jude Obermüller. Contemporary opera can be a hard sell to the uninitiated, but with this show you get seven for the price of one! Each presented as a very palatable 10 minute morsel.

To source some of our librettists, we reached outside of the opera world to some of the most exciting new voices in theatre. These include Louis Rembges, who just finished a sold out run of his one-man show, Chatham House Rules, at The Pleasance Theatre and Annie Jenkins (a 503Five alumni). All the librettists have managed to create scenes completely different to what Dom or I had imagined, with some very fresh and unexpected takes on their designated sins. Greed is a mad scientist coming at Beauty from all angles, Wrath appears to be a calm and empathic listener, Envy is a young woman stuck living with her parents and Sloth is….well, you’ll see.

The Opera Story’s decision to involve just two performers on stage, alongside multiple filmed singers, has taken the potential limitations and frustrations of putting on a production in a post-COVID world and turned them on their head. The cast of singers is the company’s largest and most formidable to date, thanks in part to us being able to record many of them in advance. For example, you would be hard pushed to cast a singer as busy and successful as Sarah Tynan (ENO/Opera North/Opera Holland Park) for a 2 minute cameo in a show, but we did it(!) – and it makes for a very unexpected and entertaining opening to the piece.

The use of film and projections by Cheng Keng add a whole extra dimension to the space, creating an immersive experience in which the audience are submerged in each of Beauty’s (Katherine Aitken) dates. Each encounter is projected large on multiple screens, creating quite an intense and amusing spectacle. Observing from afar and guiding her through the Magic Mirror process is Beast (Dan D’Souza). James Hurley, our director, has created distinct worlds for each of Beauty’s dates to inhabit. It has been very exciting observing him in the rehearsal room, as he helps our singers find all the light, shade, humour and horror in each scene.

This really does promise to be a new type of contemporary opera experience and we hope you’re tempted to come along- and for those of us out there in the dating world- I hope there’s some solace to be found in the fact our love lives can’t be nearly as disastrous as Beauty’s!