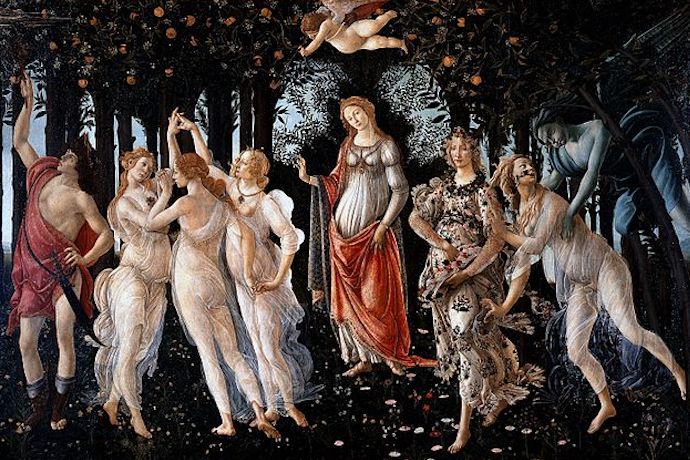 This piece of music is an evocation of three very famous Renaissance paintings by Sandro Botticelli:Spring, The Birth of Venus, and his nativity scene, The Adoration of the Magi, all three of which hang in the Uffizi galleries in Florence. Spring, in particular, is considered one of the most popular and most enigmatic paintings in the world.

Black and white reproduction of Böcklin’s Isle of the Dead

3. Pictures at an Exhibition by Modest Mussorgsky 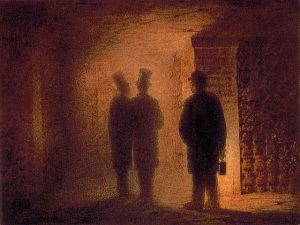 Mussorgsky composed this piece as a memorial to his friend, the Russian artist and architect Viktor Hartmann, who had died in 1873 at age 39. Shortly after the artist’s death, Mussorgsky visited a retrospective exhibit of Hartmann’s sketches, stage designs, and architectural studies and decided to capture the experience in music. The result consists of musical depictions of 10 paintings by Hartmann, interspersed with a recurring ‘Promenade’ theme, or intermezzo, that represents a visitor—in this case, the composer himself—strolling through the exhibition. 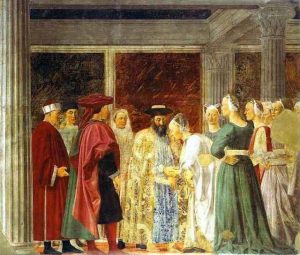 Legend of the True Cross by Piero della Francesca

4. The Frescoes of Piero della Francesca by Bohuslav Martinů

Completed in 1955, this orchestral triptych was inspired by a cycle of Piero della Francesca‘s frescoes entitled Legend of the True Cross, which the Czech composer saw in a church in Arezzo, Italy. Martinů did not intend the piece to be descriptive, but instead to evoke the mood inspired by the paintings: ‘I tried to express in musical terms that kind of solemnly immobile calm and semi-darkness, that palette of colours creating an atmosphere filled with delicate, peaceful and moving poetry.’ The intense colours of the resulting piece make a fitting homage to the style of the Renaissance painter. 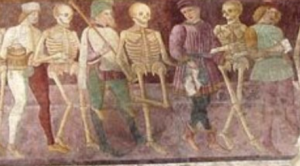 The Macabre Dance by Giacomo Borlone

This eerie piece of 1875 took  inspiration from a 15th century painting by the Giacomo Borlone, which has been viewed by a sinister, and some would say darkly humorous, response to the horror of the Black Death. Both works serve to remind us of the capricious nature of death.