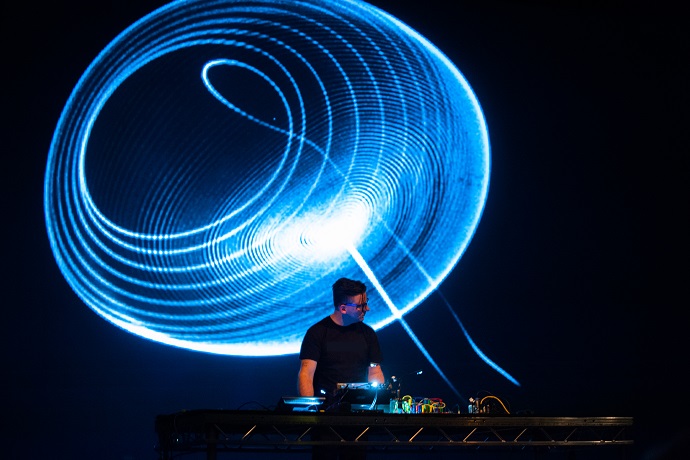 Mark Lyken came to sound art by a rather unusual route. Before a 2012 residency in Cromarty, a seaside town a little north of Inverness, he considered himself a graffiti artist with a casual interest in electronic music. Now he is an active composer, filmmaker and creator of audio-visual events, two of which feature in the fast approaching visit of Sonica, Glasgow’s festival celebrating sound art and audio-visual experiences, to London’s Kings Place on 5 February.

A childhood split between the unlikely poles of South Africa and Dundee was the setting for Lyken’s early musical interest, kept alive, while working as an artist, by continued membership of bands in his spare time. Lyken went to Cromarty intending to paint and it was only after his arrival that he found the fruitful creative seam from which these major recent projects, The Terrestrial Sea and Oscillon Response, result.

‘I grew up in the hip-hop culture of the early 80s,’ Lyken says. ‘I got heavily involved in the DIY sort of thing, which led to an interest in electronics and ended up here, so everything’s been learned on the job, mostly because there was no one else around to do it.’

For him, this dramatic change in practice is the result of a more subtle rebalancing of his various interests. ‘I was a graffiti artist for 24-5 years and then I moved into doing more abstract gallery-based work. The sound aspect of my practice was always just something I did separately – I’d always been in electronic bands and dabbled in film, more as visuals than anything else. I don’t really differentiate between any of the parts of my practice. I tend to treat sound, film and painting as the same thing: a process of layering, adding and removing.’

His work, The Terrestrial Sea, is the result of this ‘bioacoustic’ residency at the Lighthouse Field Station in Cromarty, where Lyken worked alongside ecologists from the University of Aberdeen’s School of Biological Sciences. It is also one of a number of works he has created with filmmaker Emma Dove – also Lyken’s partner. 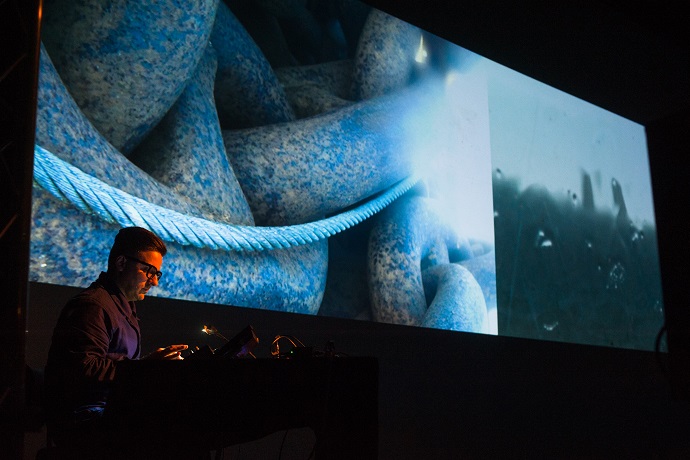 The Terrestrial Sea is suffused with the location in which it was made, while also being an exploration of the more abstract forms and rhythms of the tides, animal life and geological formations that define where sea and land meet. The music uses field recordings of the coast and from under the water to create a soundworld in which natural and electronic sounds blend.

Collaboration is key to Lyken’s multi-sensory projects, and working with Dove had particular benefits in the creation of this piece: ‘Emma grew up in Cromarty so we had an “insider” and an “outsider” working on a project. That was really interesting because I could see things that Emma couldn’t, because she was so familiar with them, while Emma gave me that “in”… it was so much easier to speak to people.’

Oscillon Response, the second of Lyken’s projects to be performed at Kings Place, is outwardly a very different proposition to The Terrestrial Sea. It takes as a starting point the work of Ben F. Laposky, whose ‘Electronic Abstractions’ were created in the 1950s using photographs of an oscilloscope – a device that produces wave-like visual representations of electrical signals. Lapofsky used the small oscilloscope screen as a canvas, feeding signals into the device to produce fluid, ghostly images.

I’ve never let a small thing like not knowing how to do something get in the way.

Lyken laughs as he recalls a stroke of luck in the work’s creation. ‘I managed to source the same oscilloscope that Ben used from a guy called Volker Klocke at the Oscilloscope Museum in Massachusetts, of all places. I got in touch with him because I only had a photograph of Ben’s original oscilloscope. Volker, unbeknownst to me, had sourced one, bought and refurbished it and had decided he was going to fulfil a lifetime’s ambition to visit Scotland to personally deliver the oscilloscope in Dumfries!’

This was not just a curiosity for Lyken, but an important part of the creative process as it ‘felt almost like Ben was in the room and you were seeing the exact same thing that he was seeing. Working with this 65-year-old piece of equipment felt like a precious act.’

From this, Lyken managed not only to reproduce such images, but was also able to record how the kinds of procedures used to create these wave-images sounded – something that had never interested Lapofsky, who was intent only on how they looked. This was one of the starting points for the music, providing Lyken with ‘a pot of material that was kind of different to anything I normally do’.

From these diverse creative impulses both Lyken and Dove look to create work not only original in its themes, but also in its relation to established genres. ‘A lot of the work that both Emma and I do doesn’t necessarily sit comfortably anywhere,’ he says. ‘I just make stuff without paying attention to where it sits and hopefully it finds an audience.’

When asked about the confidence needed to test out new skills on the most public of stages, Lyken is characteristically self-effacing. ‘Nobody told me I couldn’t do it. If I’d thought rationally about making a film or making a piece of music initially I might not have dared, because I didn’t know how. Thankfully, I’ve never let a small thing like not knowing how to do something get in the way. It’s just doing it and hopefully someone will give you some kind of platform you can dive off.’