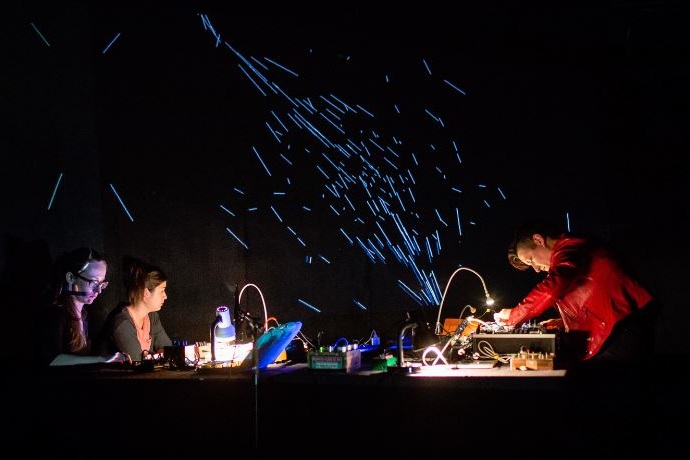 MMessy Oscillators 2.0 perform at the Zagreb Showcase of Contemporary Sound

Sitting outside a bar on my fourth day in Zagreb, a bird was tweeting in the tree over our heads. Someone next to me started to say, ‘Who made th-’ but caught themselves before finishing the question. Tired and a little overwhelmed from the previous few days, my companion had momentarily mistaken the tree and its occupant for a sound installation.

Their mistake is more understandable than you might think. In the building next door, a quintet of hanging plant pots had been rigged up so that, should anyone reach to touch the drooping leaves, a gurgle of electronic noise would erupt from concealed speakers. In the Gallery SC, just a stone’s throw away, the same artists – French duo Grégory Laserre and Anaïs met den Anext – had created a whole series of similar quasi-magical sound installations: ordinary tables and blank screens that come alive with light and sound at a spectator’s touch.

The festival’s name, Izlog Suvremenog Zvuka, translates as the Showroom of Contemporary Sound, but I would argue that it is really a showcase for the cutting edge of something far broader than the word ‘sound’ implies – something that I would call ‘music’. It is music, more than sound, that best describes the deft polyrhythmic counterpoint of sixteen domestic lamps flickering on and off at the touch of a group of four percussionists, composed by Wettl Mátyás and performed in the SC Theater on the penultimate day of the festival.

There is something magical about the whole festival. Izlog Suvremenog Zvuka takes place in Zagreb’s Student Centre, a former expo site littered with extraordinary venues such as the recently restored French Pavilion, designed by Bernard Lafaille in 1935. An extraordinary, majestic example of the tensile architecture which evolved, in the early twentieth century, after the example of suspension bridges, this tall rotunda has a reverb tail of some six seconds.

Over the course of the week, the Showroom brought together rich and languorous improvisations by Fred Frith and Tim Hodgkinson (formerly of avant-rock group Henry Cow), with startling new chamber works by Alexander Schubert and Mirela Ivičevič. Also featured was a high-tension choreography of handheld Tasers (using different tupperware to filter the buzzing) by Mexican percussionist Diego Espinosa, as well as an installation-performance by Hrvoje Hiršl exploring, with mesmerising effect, the resonant frequencies of a huge steel pipe. Walter Benjamin used to say that the expos and great exhibitions of the turn of the last century provided an opportunity for each epoch to dream its successor. Returning home from Zagreb’s own former expo site felt like awakening from just such a dream.