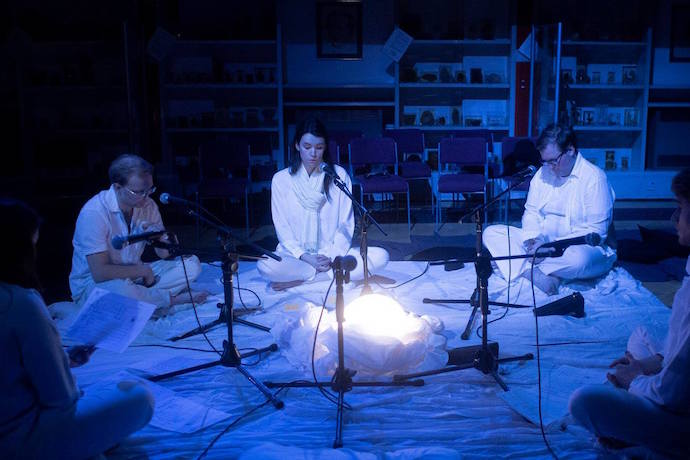 The performance space was awash in a soft light. The gathered audience maintained a bated vigil. Perhaps the delayed start time had flustered them. Perhaps they knew what to expect. It was an unusual setting for a concert. Barts Pathology Museum—a large elliptical room dotted with a boggling array of medical specimens—fanned out around our heads as we entered. In the centre of the room sat a platform, draped in white fabric and raised above the parquet flooring of the Victorian museum. On it, arranged in a circle, were six microphones and six cushions. But what caught my gaze was a glowing orb in the middle of the platform.

For a moment, surrounded by the biological panoply, and staring into this illuminated ball, I felt as though we were about to witness some kind of medical procedure, or else begin our collective initiation into an arcane secret society. It turns out I wasn’t far off. And maybe that’s what the company behind this performance, Ante Terminum Productions, was after all along.

Stockhausen is often accused of wilful esotericism. That, or his music is too eccentric, too difficult. He once advised Aphex Twin to lay off ‘post-African rhythms’, and to introduce more fluctuations of tempo and rhythm. He addressed this unasked-for advice to someone whose music is, for most people, considered arduous listening at the best of times. Meanwhile, Stockhausen’s fans delight in these complexities. They hardly bat an eye when attending his day-long operas; with glee they listen to string quartets performed in helicopters; reading about his alleged musical education on the planet Sirius provokes sheepish delight. But is there a middle ground to this binary? The Facade Ensemble’s performance of Stimmung proved there might be.

The crowd soon settled into a hushed silence. People reclined on their cushions, or sidled toward the edge of their seat. Each of the six performers emerged, one after the other in solemn procession, and took their place on the platform. The first note, a low B flat, rang out shortly after.

One thing to say about this particular performance of Stimmung: it was far more than the sum of its parts. Each aspect—from the music, the lighting, the stage design, the costumes, to the scents (I’ll pick up on that later)—was well crafted. Most impressive was that each of these aspects tended towards amplifying the effect of the music. That said, let’s talk about what the audience experienced that night.

Stimmung has 51 sections, or ‘moments’. Each section is lead by one singer, with the other singers varying and embellishing an underlying overtone melody. They only move on to the next section once the group have come to some sort of musical consensus, or sonic unity. The moments, falling somewhere between music and incantation, were mesmerising. Cascading skeins of overtone melodies; interlocking rhythms; sharp vocal utterances. They were all performed by the ensemble with flair and an impressive clarity. Aiding the crystalline vocal performance were six loudspeakers, aiming inward, behind the audience. Each loudspeaker corresponded to a singer—in effect placing the audience inside the performers’ circle. More than once I spotted confused spectators swivel their heads instinctively, only to find thin air behind them.

The intimate nature of the performance was not lost on the audience. Faces, half-lit in the deep hues of Edward Saunder’s meditative light design, wore expressions of reverie, wonder, delight. The performers themselves seemed completely engrossed in the task at hand—they rarely broke from their trance-like concentration. The, potentially unintended, comedy of the piece was also present. This was usually initiated by an audience member who feel too deep into a ‘trance state’. Before long, a singer’s strident peal sounded the alarm: “Saturday! Hallelujah!”.

Now, the scents. I admit I was skeptical. But, as with all good productions, any reservations I had completely evaporated. Perched in the balcony, three figures waited for the performance to begin. And, as it did, they began to spray and fan various perfumes down into the audience. The fragrances varied throughout the performance: woody, citric, floral. Designed by Harry Sherwood, each scent felt bespoke, designed to the requirements of the music. Aside from the sonic satisfaction gained from the wispy clicks of the spray bottles ejecting their splendid contents, this olfactory component of the performance added a light, but dramatic touch. I basked in the diffusion of perfumes, and felt the music take on a new aspect.

We all want to experience something new, something fresh. And that’s what the audience of this production of Stimmung received. Far from feeling dated or unapproachable, the company made Stockhausen’s music feel alive and accessible.
One can only hope that Ante Terminum Productions, and their talented contributors, will be around to give audiences these kinds of experiences for a long time to come.