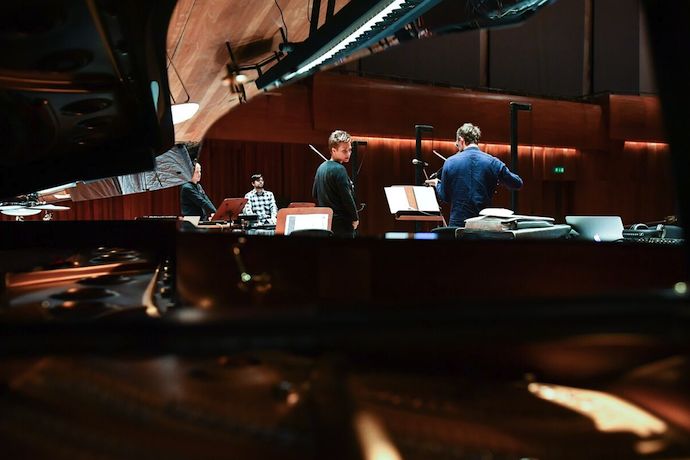 As leader of the Australian Chamber Orchestra, Richard Tognetti has made the group a byword for excitement and innovation. This concert, part of his Barbican residency, showed off his wizardry in more intimate collaborations too.

The first half of the evening showcased the exciting talents of the Guildhall School of Music and Drama’s electronic music department, some of whom also contributed to Tognetti’s set later on. After the ebullient riffs of a pre-concert Philip Glass tribute, a theremin’s oneiric warble heralded their main offering, Timeline Electronic, an audiovisual journey from electronic music’s esoteric beginnings at the turn of the twentieth century to its all-pervading presence today. As works like John Cage’s Imaginary Landscape No.4 (‘performed’ using longwave radios) and Steve Reich’s Pendulum Music emerged, images of giant mainframe computers appeared behind them, followed by Moog synthesisers, ABBA and Whitney Houston.

Although the music and images were both interesting historical artefacts, they weren’t always well matched, and the idea lost some drama as a result. Tognetti’s set, which opened with a short piece by him and arrangements of two Aphex Twin tracks, was a masterful interweaving of music and film. Jon Frank’s video projections of ripples of water becoming ripples of sand, and of enormous patterns being drawn on a beach, were mesmerising. Combined with the music, they evoked the Australian landscape with the awe and mystery of Ted Kotcheff’s 1971 outback thriller Wake in Fright.

Satu Vänskä, the ACO assistant leader and Tognetti’s wife, was more than equal to the programme’s diverse requirements, from the husky, pleading vocals in a cover of Nine Inch Nails’ Something I Can Never Have, to spectacular violin pyrotechnics elsewhere. Two acoustic duo pieces showed off the pair’s ability to mimic, shadow and magnify each other’s every move: a Mephistophelean rendering of Paganini’s fifth caprice with ‘a crazy counterpoint’ by Tognetti, and An Island off an Island off an Island by Melbourne composer Anthony Pateras. Vänskä and Tognetti pulled at its long, clawing dissonances, so sympathetic to each other’s sound that the two violins formed one pulsating instrument.

Occasionally, the visuals were so captivating that they seemed more like the main event, but that was not to the detriment of anybody’s work. The final piece was music-only. Introduced by Vänskä as ‘a love song’, Heston was a punkish tribute to Heston Blumenthal (an acquaintance of the couple) and an appropriate way to finish an evening that occasionally achieved mesmerising alchemy.