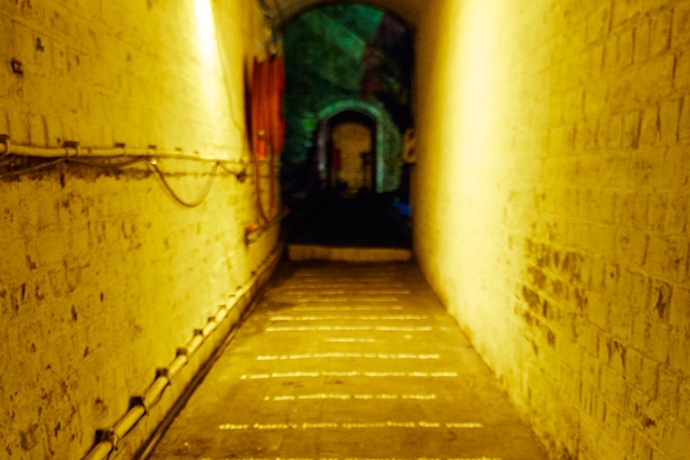 Down the spiral staircase we went, surrounded by a cacophony of sounds; the drone of bomber planes, the metallic clangs of industrial machinery, recorded voices talking over one another and mysterious echoing booms. Our destination was the Bascule Chamber, directly below London’s Tower Bridge, an appropriately spooky location for Blackout, a dramatization of the London Blitz during World War II.

The immersive theatre aspects as we descended the stairs into the chamber, supervised by actors in ARP wardens’ costumes, gave a real and visceral feel of the tension and suspense of waiting for an attack to start. Then we reached the chamber where the show proper began, mixing spoken narrative, music and video projections.

The show was based mainly on the account  of PC Fred Tibbs, a policeman tasked with photographing the destruction of the Blitz. This was accompanied by animations projected onto the sloping side wall of the chamber, some also appearing on the ceiling. In some cases these showed key elements of the story: searchlights, silhouettes of planes, flames. In another, a map of London was projected across the full length of the chamber, with red dots marking points where the bombs had fallen. This was particularly effective, making the scale of the devastation immediately tangible. Tibbs’s narrative was interspersed with news footage, again projected onto the wall, and excerpts from German military dispatches and Churchill’s speeches.

The result offered up some extremely vivid descriptions of the devastation caused by the bombings, for example, a bus ‘twisted in on itself like a tin can’. Had the projected images attempted to dramatize these remarks, the link between words and images would have been made all the more direct. Perhaps the creators were worried that this would be heavy-handed.

Overall, however, the production did an excellent job of bringing a sometimes overfamiliar and over-romanticized period of British history to life, making the story much more human and emotional. In fact, the narrative offered a corrective to the romantic mythology of the Blitz, by refusing to shy away from its darker side: looting of bombed-out houses, getaway cars disguised as ambulances etc.

The weakest aspect was the conclusion, which seemed abrupt, giving no details on when the Blitz came to an end (it’s usually counted as finishing in May 1941, when Germany invaded Russia). Instead we heard an extended prayer by Tibbs for peace and understanding between people. This may have been taken directly from Tibbs’ memoirs but it came across as sentimental and preachy.

The whole experience leaves you feeling dizzy, both from spiralling back up the stairs and from the bombardment of sounds and images. But it’s an oddly satisfying dizziness, bringing you that much closer to history.