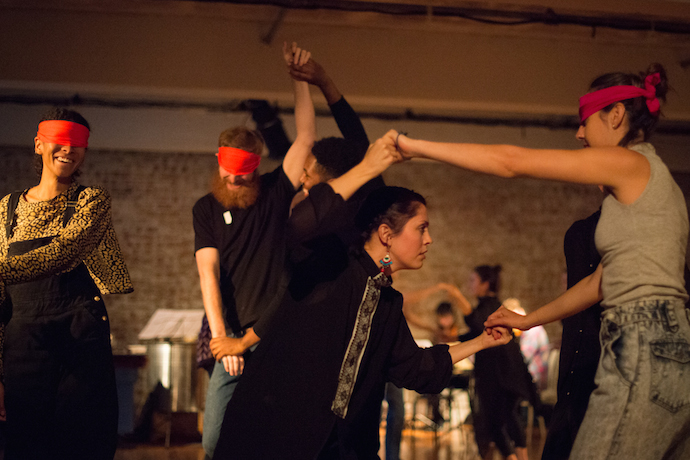 A finger lightly touches my chin, prompting me to open my mouth. ‘This is your first taste experience of the evening’. I’m presented with a colourless cube of jelly garnished with a petal, and my leader proceeds to blindfold me.

By this point is was pretty clear that I was not at your average classical music concert. Directed by Steph Singer, also the mind behind London’s Open Senses festival, Bittersuite aims to open up classical music to new audiences by presenting it in immersive multi-sensory events.

From the moment I stepped into Shoreditch’s Rich Mix, to the very end (when our blindfolds were removed), it was clear that every sensory stimulus available to Bittersuite’s creators had been considered as a part of the work.

Even the waiting area before the performance was an experience in itself. Having relinquished our mobile phones and shoes and socks, we were handed a teacup of nonalcoholic mulled wine and ushered into an atrium dimly lit with red lighting and vintage lamps. Chintzy armchairs and tables created a lounge-like space, a projection of woodland foliage flickered on one wall, and MP3 players were scattered around, playing a Moravian folk song on loop.

The ‘leaders’, hair plaited and dressed in identical folk-inspired dresses, then came and made polite conversation before blindfolding their designated audience member.

If this was an area designed to relaxed the audience before the sensory assault which was about to hit them, it did an excellent job. It also functioned to subtly introduced the musical and symbolic themes which would weave themselves into the upcoming performance.

Where the waiting room was an oasis of calm, the performance itself was a riot of sensory stimulus. Taken by the hand of our leader, we were pushed, pulled and even at one point carried through a heavily augmented version of Janacek’s String Quartet No. 1. Between movements, the Phaedra Ensemble performed atmospheric incidental music, expertly composed by Fred Thomas to fit seamlessly around Janacek’s score, while we were fed ‘tastes’, read poetry, and exposed to a bespoke scent worn by our leader.

There were times when the performance reached sensory saturation point and I found I was focusing more on avoiding falling flat on my face than the music. But this was well countered by moments of repose – when, for example, we were left on the floor wrapped in a blanket for a few minutes after a period of activity.

There is also a danger that this kind of sensory performance art can become gimmicky, relying upon the novelty of its multi-sensory media to mask a lack of artistic depth. But by deftly towing the line between abstraction and a prescribed narrative Bittersuite allowed each audience member to construct their own imaginary journey through Janácek’s score without dictating its direction. What also gave the performance such vitality was its simple but effective use of human touch, a direct and intimate creative stimulus which us touch-averse Brits could do with exploring more often.

As the performance reached it apotheosis with a final live ecstatic rendition of the folk song we had heard before on the MP3 player, our leaders removed our blindfolds. Tentatively opening my eyes, I saw people in speechless shock, others hugging their leader, no longer strangers but friends. This was art not only as profound individual experience, but also, and most crucially for our increasingly atomised times, as a means of developing deep social connections.