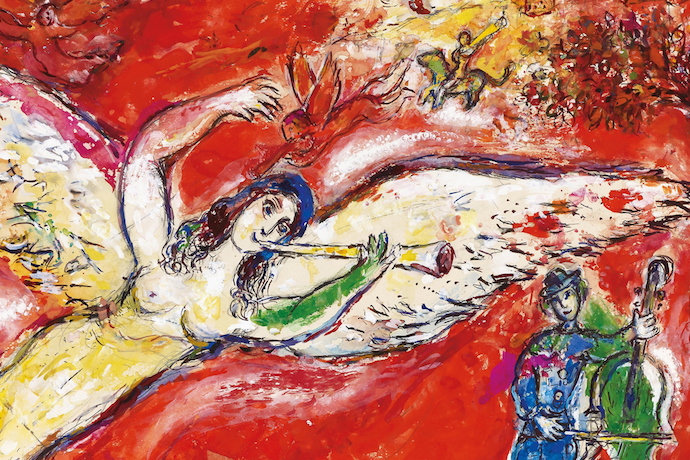 Marc Chagall had synaesthesia, that crossing of wires in the brain that causes the senses to intertwine. Sounds become colours, and colours become sounds. In Chagall: Colour and Music, the Musée des Beaux-Arts de Montreal endeavours – and succeeds – to make synesthetes of its visitors.

It’s unusual for fine art museums to have a soundtrack, but the presence and absence of music in the exhibition rooms is used to great effect to bring Chagall’s colourful paintings to life. Traditional klezmer music fills a room of pictures illustrating life in eastern European Jewish communities, causing the many violins to jump off the canvas. Further along, a gallery of big, brightly-coloured circus scenes is surprisingly silent. After the rousing soundtracks of the previous sections, this tranquility is striking. But music is still present: the lack of direct auditory stimulation encourages the viewer to find the musicality in the bright colours and dynamism of the works by tapping into their own newfound synaesthesia. 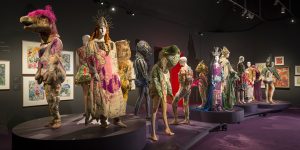 In addition to colour and sound, sections highlighting Chagall’s adventures in sculpture and costume design bring elements of texture to the sensory mix. By far the most effective section of the exhibit, however, is the penultimate room showcasing the artist’s mural at the Opéra de Garnier, in Paris. A circular screen looms over plush beanbags, and as the camera focuses in on each operatic scene depicted on the concert hall’s ceiling, a soundtrack from the composer in question fills the room. Visitors can lie back and get up-close and personal with a work generally only seen from a distance. 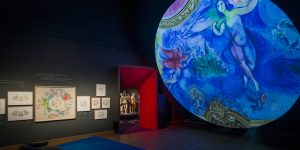 The exhibition ends somewhat abruptly, and the message can be a little heavy-handed at times, but the overall effect is powerful. I left reminded that the arts do not exist in isolation, and for those more familiar with visual than auditory art, Chagall: Colour and Music might be just the gateway they need into the universe of classical music.