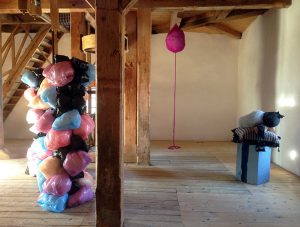 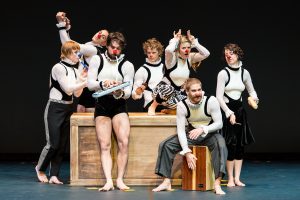 Circa’s Carnival of the Animals

2. Carnival of the Animals, Australia

At the frontier of new circus since 2004, acrobatics troupe Circa pay homage to the whimsical world of the animal kingdom in a theatrical suite inspired by Camille Saint-Saëns’s musical menagerie. Expect feathers, fur and fins.

The 70th edition of the annual Avignon festival aims to put up musical resistance against the politics of despair. Highlights include Yitzhak Rabin: Chronique d’un Assasssinat, a piece exploring the political circumstances leading to the assassination of Yitzhak Rabin and the tearing apart of Israeli society; Karamazov, a theatrical-musical take on Dostoyevsky’s novel; De l’imagination, a piece for singer, dancer and pianist inspired by Bluebeard; and Prima Donna/Rufus Wainwright, a visual symphonic concert based on the character of the soprano Maria Callas. 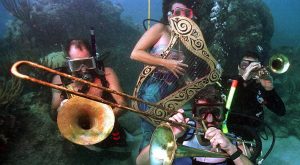 A tradition for over 30 years, this unique festival takes place off Looe Key Reef in the Florida Keys National Marine Sanctuary. Music is broadcast from underwater speakers suspended beneath boats while ‘mermaids’ and other costumed characters visible to divers and snorkelers ‘play’ musical instruments. The playlist typically features marine melodies ranging from humpback whale songs to The Beatles’s ‘Octopus’s Garden’. This family-friendly event encourages participants to attend in costume.

This fusion ensemble combines music from the furthest reaches of the globe with jazz and impressionism, showcasing pieces played upon rare instruments from various cultural traditions. The orchestra includes performers from Bulgaria, Japan, Lapland, Mongolia, Norway and Tuva. Among the performers is Terje Isungset, percussionist and founder of the world’s only festival for instruments made out ice.

Running across a week, this multi-arts festival offers a variety of musical, theatrical and circus performances in the Finnish Lakeland. Highlights include Bright Shadow, a duo between dancer Minna Tervamáki and accordionist Kimmo Pohjonen; Bright Windows on Dark Walls, in which actor Hannu-Pekka Björkman and saxophonist Jukka Perko interpret texts by modernist author Antti Hyry; and a performance in which classical music meets stand up comedy.

In this one-off performance that explores the interplay between the old and the new, ten young musicians from Central Asia perform traditional and contemporary music from Kyrgyzstan and Tajikistan. The musicians make use of komuz, tanbur and rubab – traditional instruments of the region. 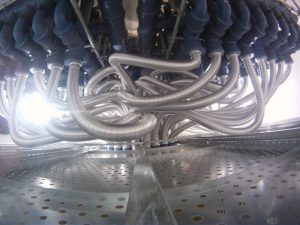 In what the creators term ‘Osmodrama’ – an infant interdisciplinary art form – the first festival for olfactory art in Berlin combines smell with music, film and literature. Specific odour sequences are designed to work independently as well as in conjunction with other art forms, and are produced by Smeller 2.0, an electronically controlled scent organ. Highlights of the festival include Orchestral Whifftracks, in which the Berlin Improvisers Orchestra performs Stephen Crowe’s Find Warm Wind Farm to a precisely programmed setting of smell sequences; and Scentscapes & Soundscapes, featuring electronic music by Carl Stone and soundscapes by Phill Niblock, among others.

Highlights of this Toronto-based festival include Synthecycletron, an interactive installation that allows the public to generate power and sounds by pedalling on stationary bicycles; Birth and Death Frequencies, which gives the illusion of whispering sounds into the visitors’ ears; and a sound walk on Toronto Island, in which an audience moves through a place and the environment ‘performs’.

Guitarist Fanous and Cellist Uitti explore the harmonic and timbral potential of their respective instruments and the musical possibilities they provide in unison. The duo bring together their wide-ranging individual influences, which span contemporary classical, free improvisation, jazz, flamenco, middle-eastern classical, electronica and noise. Also featured in this concert will be Uitti’s custom built eCello, processed using laptop electronics.