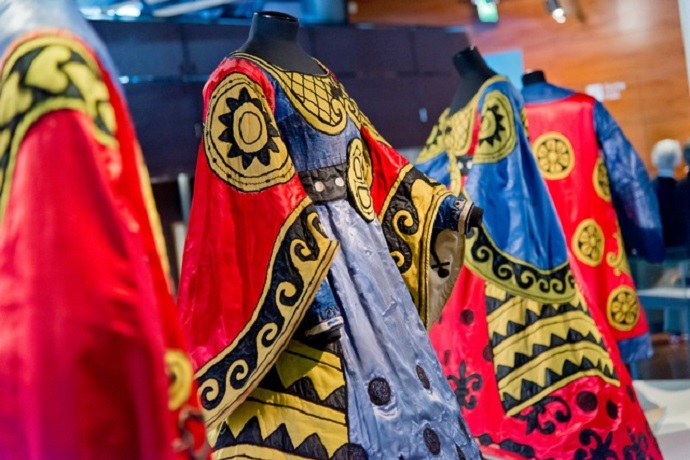 From Tchaikovsky’s The Nutcracker to Christopher Wheeldon’s Alice in Wonderland, toys and playing cards have long provided composers and choreographers with inspiration. Rarely do toys and cards combine however, except in The Magic Toyshop, the Ballets Russes’ great post-war success that has now largely been forgotten. A new Paris exhibition, When Derain Made the Cards Dance, sheds light on Sergei Diaghilev and André Derain, the French fauvist painter who became the creative force behind the ballet and arguably went on to outstrip his friend and rival, Pablo Picasso.

The Magic Toyshop tells a simple story of two families visiting the shop of a toymaker, who shows them his collection of dancing marionettes, including Cossacks, poodles and playing-card figures. The puppets perform a series of popular and folk dances from across Europe, including the tarantella, mazurka and cancan. The work was first performed by the Ballets Russes in June 1919, one of two pieces that Diaghilev premiered that year in London, where he had escaped to during the First World War. The star dancers were the effervescent Russian ballerina, Lydia Lopokova, and the ballet’s ‘rubber-limbed’ choreographer, Léonide Massine. For music, Diaghilev asked Respighi to orchestrate a set of piano works by Rossini that the Russian impresario had uncovered in Paris.

Derain is vastly underrated as a theatre designer. I know it’s sacrilege to say this, but he’s far better than Picasso.

According to Jane Pritchard, curator of dance at the Victoria & Albert Museum, Diaghilev understood audiences in a way that few impresarios have. ‘Diaghilev was clever: he realised that Londoners were far more conservative than Parisians.’ Instead of serving up a shocking modernist work like The Rite of Spring, which had caused a riot on its premiere in Paris six years earlier, Diaghilev gave Brits something they would feel happy with: toys coming to life. He approached the avant-garde artist André Derain to design costumes and scenery that were painted in a naïve style, but which avoided the garish colours of his earlier fauvist work. ‘It gave audiences the sense that they were seeing something radically new, but not too much so – Diaghilev knew we couldn’t cope with the really radical stuff.’ 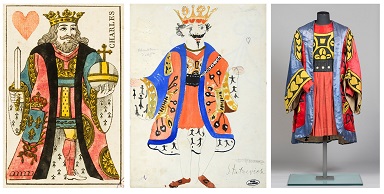 From right to left: the King of Hearts costume; Derain’s costume design; the original playing card for the design. (credits below)

Collaborations between artists and ballet companies were popular at the time: in the same year as The Magic Toyshop appeared in London, Diaghilev had Picasso design the costumes for another ballet, The Three-Cornered Hat. Agnès Barbier, curator of the Derain exhibition at the Museum of Playing Cards in Paris, explains that Diaghilev had a shrewd ability to spot artistic talent early on: ‘Most of the painters that Diaghilev chose went on to become the most famous of the 20th century: Picasso, Matisse, Braque, Derain.’ The Magic Toyshop launched Derain’s career as a theatre designer, and he went on to work with all the great choreographers his time.

But while there have been many exhibitions about Picasso’s involvement in the theatre, there have been hardly any looking at Derain, whose contribution to ballet has been largely overlooked. According to Pritchard, this new exhibition in Paris begins to redress the balance: ‘Derain is vastly underrated as a theatre designer. I know it’s sacrilege to say this, but he’s far better than Picasso. Derain had charm, wit, the ability to work with a wide range of choreographers. But being an artist that no longer has the status he once had, his contribution to theatre designer is often forgotten.’

Derain had served as a gunner in the First World War, and his involvement in London theatre in the spring of 1919 gave him a great sense of release from the tensions of the era. It was Derain who came up with the idea of adding a final battle scene in which the toy Cossack soldiers drive out the customers, whose purchase threatens to split up the star-crossed cancan dancers. Evidently, Derain hadn’t entirely left the war behind him.

But are the toy soldiers in the ballet a comment on the men who had been ordered over the trenches by their puppet masters? ‘That might be going a little far,’ Pritchard argues. ‘The ballet is more to do with escapism from war, rather than saying we’re all puppets.’ Yet there was undoubtedly a dark side to Derain’s interest in toys and playing cards, and this expressed itself in his obsession with the occult. He had written to his future wife from the Western Front asking her to send him Tarot cards and the bible of occultism, Tarot of the Bohemians.

The exhibition When Derain Made the Cards Dance allows visitors to compare Derain’s illustrations of Tarot cards with his designs for the costumes and scenery of The Magic Toyshop. It brings together Derain’s four striking playing-card costumes, painstakingly restored after the wear-and-tear of 300 performances, as well as other costumes on loan from the V&A. The exhibition also contains examples from Derain’s personal collection, including his primitivist wood engravings and cherished marionettes, evidence of a child-like fascination that came to fruition in the ballet.

The Magic Toyshop toured Europe, the United States and Australia, becoming the Ballet Russes’ most successful post-war production. So why is it so rarely performed now? Pritchard says, ‘later productions of the ballet have deteriorated visually and choreographically, like Chinese whispers. It’s a very difficult work. I don’t think there are many who would know how to stage it now. It’s about having artists who can create clear characterisations, and by and large dancers nowadays don’t get enough experience of that to bring The Magic Toyshop alive.’