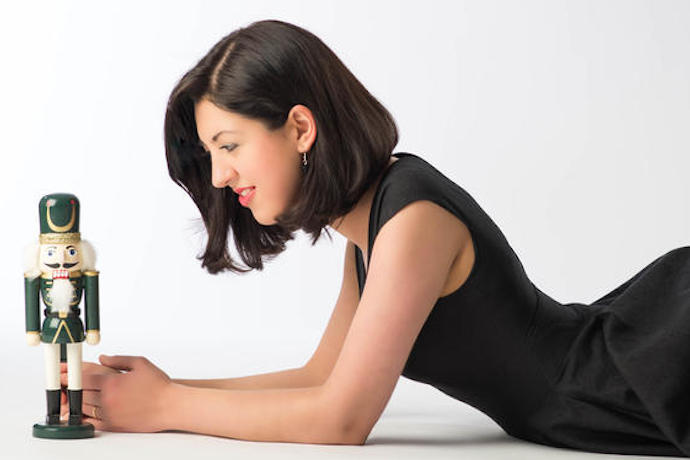 In 2009, Pulitzer Prize-winning critic Sarah Kaufman described The Nutcracker as a Christmas ‘chore’ that ‘casts its long shadow over the fall dance season’.

But hidden away in Barbican’s Milton Court is an adaption with a dazzling digital difference. Concert pianist Alexandra Dariescu’s The Nutcracker and I is a multimedia feast of solo piano, ballet and live animation. As Clara dances, a pixel-pointillist backdrop will be projected onto a transparent gauze screen along with various digital dance-partners whose movements sync with hers in real-time. Dariescu explains: ‘Everything will be live. The projection mapper will be able to adjust the movements to the ballerina. It’s a piano recital and I take time depending on the inspiration. Music is never perfect.’

I was doing a workshop in Tokyo and one of the kids asked me: “What do you imagine when you play?” And I thought this is so wonderful: I can actually show people what I’m imagining.

Dariescu’s ambitious brief of combining classical music with animation – while preserving the imperfect idiosyncrasies of live performance – has taken almost three years of diligent planning. The project began by commissioning visuals company Yeast Culture, who have previously toured with the Berlin and London Philharmonics and who Dariescu describes as ‘the best of the best in the business’.

She and Yeast Culture director Nick Hillel decided against computer-generated animation, instead opting to have every frame hand-drawn on iPads: ’12 drawings per second – about 35,000 drawings all together […] It’s a lot more expensive, but it’s a lot more human’, she says.

Dariescu has envisaged sound through images since she first started playing piano. Now she can share her experience: ‘I was doing a workshop in Tokyo and one of the kids asked me: “What do you imagine when you play?” And I thought this is so wonderful: I can actually show people what I’m imagining.’

Not only will The Nutcracker and I illuminate Dariescu’s synaesthetic musical mind, it will also chart her musical journey (the show starts with Clara dreaming of becoming a concert pianist). Dariescu was born to an ordinary non-musical Romanian family – she recalls her grandmother queuing for food and milk during the country’s final years of Communist rule. When she was seven, her mother saved up to buy her an upright piano – ‘a special thing to do’. Just two years later Dariescu made her stage debut as a soloist in an orchestra of adults. From then her career path was decided. ‘I came out and I said: “This is what I want to do.” In a way I was a blessed soul…’

Blessed maybe, but her progression to globally admired concert pianist hasn’t always been straightforward. ‘When Clara goes to the palace of marzipan she’s homesick – and this is exactly how I felt when I left Romania just after turning 17 to move to Yorkshire.’

Yet Dariescu also remembers being welcomed with ‘great warmth’ and speaks passionately about the need to experience different countries and cultures. ‘This is where you get your inspiration from: travelling, meeting new people, learning new things […] Music is a completely universal language. The more freedom we have, the better we will become as artists and human beings – the more borders will be diminished.’

It’s a belief she lives as well as teaches. When we speak, Dariescu has just played three countries in one week: at London’s Cadogan Hall, Vienna’s prestigious Musikverein (where she was making her debut) and back in Romania for a concert marking the centenary of the country’s unification with Transylvania and the birth of her pianist idol Dinu Lipatti. 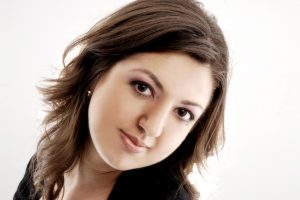 A deep sense of gratitude to those family members and teachers who encouraged and nurtured her talent pervades The Nutcracker and I, with Dariescu hoping her story will inspire others. ‘The motto is: dare to dream. There’s so much violence on TV and I really hope I can be a role model for a younger audience.’

Is this also a case of making classical music more accessible? ‘Absolutely. The audiences are dying. This is my way to build bridges for younger audiences and those people who are new to classical music.” To further accommodate first-time audiences, the ballet has been cut from two-and-a-half hours to just 50 minutes with 15 carefully chosen movements from Tchaikovsky’s original score, including three new arrangements by ENB’s Gavin Sutherland. Despite being a veteran Tchaikovsky performer, Dariescu says these arrangements are: ‘the hardest thing I have ever played – they are so virtuosic.’

Condensing Tchaikovsky’s orchestral score for solo piano without losing its tinkling, bell-like sonic charm is a challenge Dariescu relishes: ‘I am happy, I am excited, I am terrified. But I would much rather fail for having tried something amazing than not try. I am a risk-taker – I’ve always been like that […] You always have to prove yourself. You always have to show that you’ve grown. Always analyse what you do and try to improve.’

But would Kaufman think the same? ‘I’d love her to come to see that not everyone does the same thing,’ says Dariescu. ‘The whole point is dare to dream and you can do that any season.’

Choreographed by Jenna Lee with Désirée Ballantyne as Clara, ‘The Nutcracker and I’ receives its world premiere at Barbican’s Milton Court on December 19 . A world tour follows with dates in Russia, China and Romania already scheduled as well as plans for an extended UK tour next year.