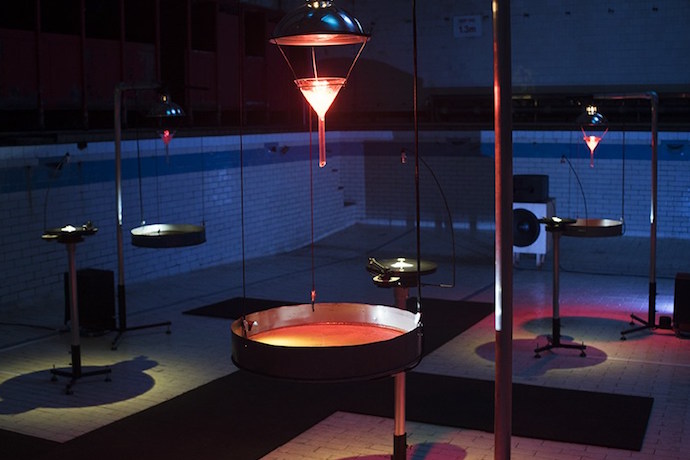 Officially, Sonica Glasgow seeks to explore the murky area between music, theatre and visual art.  But it could rebrand itself as a treasure hunt. Scattered across the city, this biennial festival is made for those who like to do things the hard way – navigating dual carriageways, industrial wastelands and dilapidated buildings in the pursuit of culture. And Cathie Boyd, its fearlessly innovative founder and artistic director, must know this. Why else would she have centred so many of this year’s offerings around the theme of game play?

Take Archifon IV, from the Czech artist Tomáš Dvořák and Dan Gregor (collectively known as Floex & Initi). This interactive installation, which turns Glasgow University’s atmospheric Memorial Chapel into an enormous electronic musical instrument, might have been dreamt up in Hamleys. Columns act as faders. Statues sing beatifically. Arches and stone slabs provide pulsating sounds, all manipulated by laser pointers. It’s a sophisticated toy, allowing participants to generate quite an array of intricate musical combinations. But there’s not an awful lot more to it.

As an idea Lynette Wallworth’s VR experience, Collisions, was more substantial. It tells of an Aboriginal family making a life in the Australian Outback, in the aftermath of the atomic bomb testings of the 1950s. Here were the makings of fascinating insight into a too-little discussed slice of history. In a world, however, where VR technology is now so readily available on mobile phones, its offer of 360 degree immersion didn’t quite manage to compensate for its paper-thin narrative.

No, the real substance lay in those works that touted more than technological wizardry. Mark Lyken’s  fly-on-the-wall film-collage Táifēng and the Motorway Saint, for instance, offered a dreamily poetic insight into modern day Taiwan, lingering  on those human details that would pass the casual observer by: in his hands, the subtle interactions of two old men playing chess in a noisy cafe become a source of fascination. There was much, also, to be savoured at the Govanhill Baths in Glasgow’s south side. First opened in 1917, this beautiful building was where residents at the local council tenements took their weekly baths – a function it held until 1991. Now it is a dark, rust-ridden relic, heavy with the smell of damp, and a popular choice for cutting-edge arts events. Its empty pools provided just the right acoustics and atmosphere for Kathy Hinde’s Phase Transition, an installation in which the dripping of meltwater blends with metallic sounds to create a ghostly metaphor for global climate change. And the disused bathing cubicles upstairs were more than spooky enough for Chijikinkutsu, by the Japanese artist Nelo Akamatsu, in which tiny electric currents sent tiny needles chinking against suspended glass containers, to create an exquisite, delicate soundscape.

But the highlight was Shorelines at Tramway, a collaboration between the British composer Oliver Coates, the Dutch quartet Ragazze and the Glaswegian director Josh Armstrong. Inspired by the North Sea Flood of 1953, which took many lives in the Netherlands, UK and Belgium, it’s something between an opera-without-words and a ballet-without-dance, that uses movement, and Coates’s meditative music to evoke a sense of poignancy. It does so brilliantly, culminating in a taped testimony from a woman who had lost her baby, husband and mother-in-law to the disaster. This could have been self-indulgently morbid, but thanks to the restraint of the imagery and music preceding it – the silhouette of a baby pram; a Minimalistic duet between violin and viola – it hit the mark.