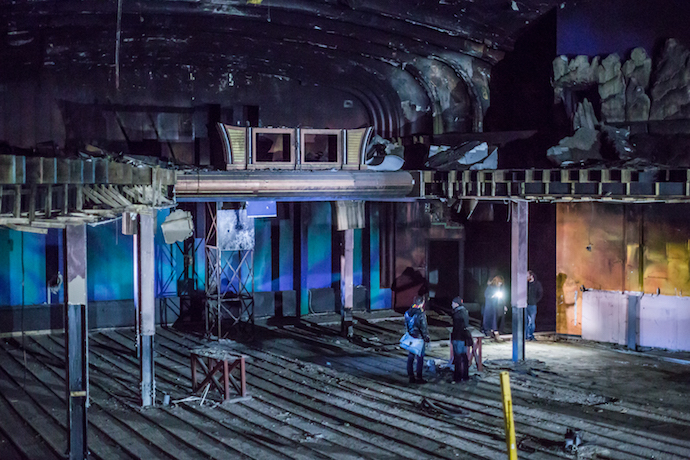 Inside Leith State Cinema, one of the venues for Hidden Door. Photo: Chris Scott

Since its inception in 2014, when the festival opened up a group of abandoned vaults behind Waverley Train Station to create a multi-arts platform spanning nine days, Edinburgh’s Hidden Door festival has been growing at quite an astounding rate. With the festival occupying two venues this year, it will be their most ambitious programme to date. Having breathed new life into the Leith Theatre last year – a spectacular space which had lain sealed up and empty for decades – the festival will return to that venue, as well as opening up the former State Cinema round the corner. The cinema, which first opened its doors in 1938, stopped showing films in 1972 and has since been left to fall into disrepair.

‘The State cinema is a very derelict building’, says David Martin, Creative Director of Hidden Door. ‘The Leith Theatre was, I’d say, more sort of semi-derelict and still quite nice, with seats that you could sit on and old plasterwork that looks quite good. The state cinema has none of that kind of stuff – it’s very much a broken shell, so will feel very very different to the Leith Theatre. It will feel rough and dark and spooky. It definitely has a very degraded kind of feel to it – it’s got an atmosphere which is really different to the Leith Theatre.’

Giving buildings a future is very much a legacy that the festival has given its sites, with the aforementioned vaults now home to wine bars, restaurants and luxury boutiques, and Leith Theatre rapidly becoming one of Edinburgh’s most exciting live music venues. For a festival still in its infancy – and run completely by volunteers – this is quite remarkable, although the sheer scale and size of this year’s festival shows the team behind Hidden Door are definitely not resting on their laurels.

Edinburgh needs something like Hidden Door – if we weren’t doing it I think somebody else would.

‘It feels like chasing a giant snowball down a hill in a way – it just gets bigger and bigger and we can’t stop it!’ David tells me. ‘At the heart of it, we’re still running Hidden Door as quite a small festival … but one of the ways we’ve grown quite significantly is the number of partnerships that we now have with different organisations. We have the jazz and blues festival; Imaginate – the children’s festival; and the Film Festival. To bring an arm of these international festivals together at Hidden Door is really exciting, because although these festivals are international, they all still want to support local, homegrown artists – and that’s what Hidden Door is all about, really.’

One group of homegrown artists is Edinburgh’s hip-hop trio Young Fathers, who catapulted to fame after winning the Mercury Music Prize in 2014. ‘Everyone’s talking about Young Fathers, but I’m also really excited about the American duo Sylvan Esso, who are playing on the Saturday,’ says David. ‘They’ve got a great light show, fantastic songs that get better and better the more you listen to them, and they’re great performers. And our opening night is an all-female line-up. We’re kind of conscious at Hidden Door that there’s still a lot of gender inequality in terms of festival line-ups and in the arts in general, so we’re really keen to make a statement about that.’ From headliner Nadine Shah’s sultry rock – influenced by her English upbringing and Norwegian and Pakistani heritage – to Brighton trio Dream Wife’s ostentatious punk-rock, to the otherworldly sounds of Welsh singer Gwenno, the opening night is set to be one to remember, and a fantastic kick-off to this year’s festival. 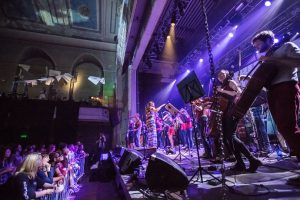 Having grown so much in the past few years, it will be interesting to see what path Hidden Door chooses to take. ‘We’ve got a few ideas. Some of them are … complicated. But as a general idea for the future, we are really keen to see Hidden Door happen in different ways and different places. Not necessarily just in Edinburgh, but see what it’s like in a different Scottish city, or even in Newcastle or Manchester. It’s really just about trying to get creativity to flourish. It’s not about being a festival, necessarily, that’s just the way it is at the moment in Edinburgh. There’s lots of other ways that the Hidden Door idea of creative, temporary use of spaces could turn into other things. It could be that we do something a bit more long term for artists and theatre producers to make new work and to develop their ideas.

‘We’d like to get more artists to work with each other, to exchange ideas; one of the things that’s interesting about Hidden Door is that we bring people who are dancers and artists and musicians to mix together. In education you’re forced to seperate things a lot – so when you become a visual artist, you stop talking to theatre makers and stop looking at dance. But actually, in the grand history of art, these things are always mixed up together, so we’re keen to keep mixing it up and find fun and interesting ways to do that.’

David himself is a teacher. In fact, I’ve caught him on his lunch break from the Foundation Course he teaches at Leith School of Art. I ask him how his work as a teacher informs his role as the festival’s Creative Director, and he feels that they are complementary. ‘I think when you’re a good teacher you help people figure out how to do things themselves more than tell them how to do something. And with Hidden Door we’re working with a lot of people and trying to get them to own it a bit. We don’t want to do Hidden Door at people, we want them to be involved and participate a bit. I think teaching at its best is a participatory, interactive thing. That way of working with people comes through into how I try and organise not just the contributors but the team that I work with.

‘Edinburgh needs something like Hidden Door – if we weren’t doing it I think somebody else would. It’s necessary now that there’s a kind of stepping stone, for new stuff, for experimental things. Edinburgh needs more of that. There’s so much creativity in this country, it’s ridiculous! And we just want to find an outlet for some of it.’

They’ve certainly realised that ambition. With a packed programme of visual art, music, dance, theatre, film and comedy, performed by both established artists and those just negotiating their path, Hidden Door is as transformative for its performers – and audiences – as it is for the buildings it inhabits. I ask David where he sees the festival headed, and he jokes, ‘world conquest.’ With all they’ve achieved in the past five years, it’s not that crazy an idea.

Hidden Door Festival runs from 25 May to 3 June at Leith Theatre, Ferry Road, and the former State Cinema, Great Junction Street. Events are free until 6pm. Full price tickets from £12, available at hiddendoorblog.org.