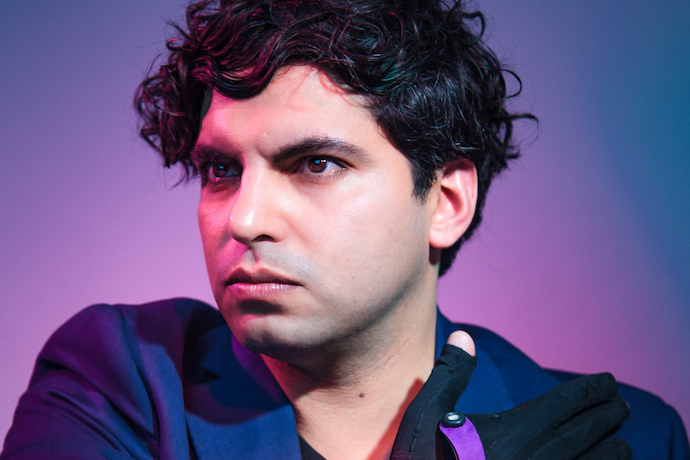 Zubin Kanga carries himself with style, charisma and quiet confidence. Eyes darting around the room, the well-dressed lecturer, pianist, composer and technologist made the final arrangements to his cyborg-soloist setup with the warmth of a child eager to share their arcane curiosity, presenting works composed by Nina Whiteman, Nwando Ebizie and Neil Luck.

The show commenced with composer Nina Whiteman’s Cybird Cybird, with Kanga, hunched over the keys, bound to MiMU multi-sensor gloves mounted on his wrist. Interestingly, while offering three-dimensional capability to perform music in physical theatre, the cybernetic endowment appeared to imprison the performer, as if shackling him to his piano.

Kanga duetted with displays onscreen: Sporadic and humorous text-to-speech explored an odd stream-of-consciousness, which commenced in birdsong and culminated in ‘wing-workouts’ (better left unexplained).  It made for a fabulous and chaotic proof-of-concept that engaged in effortless conversation with the crowd, prompting laughter and closing in joyous applause.

Continuing with Nwando Ebizie’s I Will Fix Myself, Kanga played as an ‘imagined sapient piano-playing robot of the future’, echoing James Ferraro’s postmodern forays into consumer culture and hyperreality. Mirroring audio-visual content in sonified movement and piano, Kanga played and spoke against around the composed material, breathing life into computer-generated displays. I recalled Jordan Wolfson’s Coloured Sculpture – a 2016 moving sculptural work at the Tate that operated on a cycle lasting around fifteen minutes – making only occasional human contact between being flung around the room by machines. Ebizie’s piece allowed a symbiosis between movement and sound, performer and performance and, ultimately, body and technology.

The elements laid bare in the first half found focus during the UK premiere of Whatever Weighs You Down in collaboration with Neil Luck. Poetry, keys, multi-monitor video recordings (featuring Chisato Minamimura) and cyber-soloist kit worked together in a fantastic tour-de-force which filled the meaning of the term ‘multi modal’ to its very brim. A few shades darker, the composition traced loops around a ‘forgotten idea’ in a hypnotising devolution into les bas fonds. Heavy in atmosphere, the components of the cyborg soloist showed subtlety and depth, with Kanga’s movements bending plucked piano strings and distorting subtle jingles in and out of lucidity. Half-explored themes unravelled into a meditative wasteland of decay, which descended softly into silence as Kanga dragged his mic offstage.

I walked away from the two-part performance inspired by the depth of imagination in Kanga’s collaboration. His vision in Cyborg Soloists was made possible by a a £1.4 million grant in the form of a Future Leaders Fellowship from UK Research and Innovation. From the moment of entering Oto one could feel Kanga’s pride and excitement radiate into the room, and upon leaving I understood his reason. The show convinced me that strategic arts funding can kindle communities, new media and opportunities for performers to recontextualise their talent, with artists like Zubin Kanga putting co-creators at the heart of their work. Immersive, intense and excitingly novel, Kanga’s art-form inspired curiosity and gave me faith in the future of performance capability.