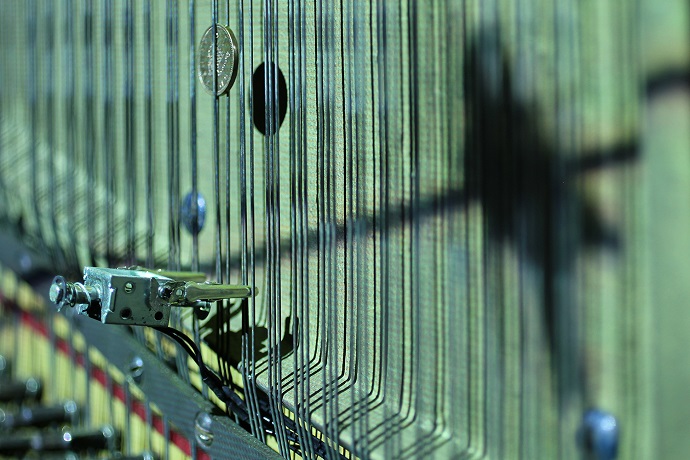 When Ars Electronica awarded her an Honorary Mention, artist Kathy Hinde took a quick swim in the river Danube, marking the proudest moment in her career. It was September 2015 in Linz, home to one of the world’s most important media art festivals, and Hinde had just exhibited Tipping Point, a delicate sound sculpture which explores the sonic intricacy between glass vessels with varying water levels. Arriving at King’s Place as part of Sonica 2016, a cross-arts festival founded in Glasgow three years ago, the installation is representative of Hinde’s style as a whole. 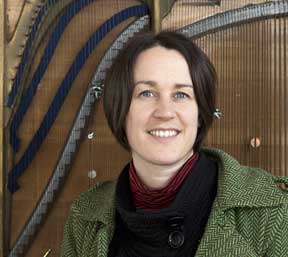 Creating mysterious, hypnotic soundscapes out of nature is evidently key to her work. It plays a significant part in For the Birds, an outdoor installation showcased in March at New Zealand’s Otari-Wilton’s Bush reserve, for which audiences are advised to ‘wear appropriate footwear’.

It was also on display in Submerge, an installation from 2015, which featured the sound of Glasgow’s hidden streams, recorded with an underwater microphone. ‘With music, I currently find pure sound and noise very appealing and beautiful, often more so than melodic and harmonically driven music,’ says Hinde.

But where did this interest in nature spring from? Hinde dates it back to her upbringing in an East Midlands village, where she could often be found climbing trees, making dens or tadpole hunting. But as a child she was also into arts and crafts – an impulse that was to stay with her, even if her range of tools expanded to include cameras, videos and laptops: ‘I didn’t think I’d like using computers – but it turns out I’m slightly obsessed with them.’

Shortly after graduating from her combined Arts and Music degree, Hinde was commissioned by pianist Joanna MacGregor to write Ultramarine, a set of audio-visual piano pieces. She has continued to straddle the gap between visual art and music ever since, trying, in her works, ‘not to privilege one over the other, but for them to be fully integrated.’

In the process she has developed an interest in the way ‘things change in different contexts’. That’s why she took motors, actuators and electronics to Sao Paolo, ready to disembody a piano for her ingenious Piano Migrations, which translates the movement of birds into sound. Transporting materials to the great outdoors presents greater challenges, as with For the Birds, which took ten days of hard labour to set up for its premiere at a nature reserve in north Wales. But the experienced certainly toughened Hinde up: ‘I’m now quite happy to stick a load of technology into a wheelbarrow and go off into the woods with it.’

Interestingly, though, she prefers not to work alone. Instead she involves various craftspeople and experts in order to achieve an aesthetic result, such as scientific glass blower John Rowden, who worked with Hinde on Tipping Point. And when preparing her research for Submerge, she found local people to guide her to hidden streams. ‘Field recording and listening to the world is hugely inspiring and gives me a space for ideas and creative thinking. So – in the same way – I want to share this experience with others by including them in this process.’ Besides, she says, ‘I’ve never really identified with the idea of an artist being a “lone wolf in the studio”.’