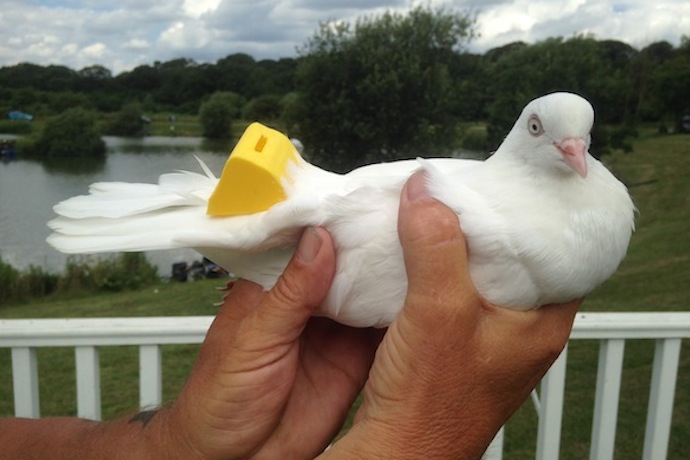 Consider the humble pigeon – widely believed to be incapable of any sound more harmonious than a desultory cooing. Who would have thought it could be the source of compositions which move audiences to tears? Sound artist and folk musician Nathaniel Mann has utilised the ancient Chinese and Indonesian tradition of pigeon whistles to create a piece of music that spans across the sky, intimately reproducing the flight of the birds in sound.
Starting out as a barman at the Colchester Arts Centre, Mann was inspired by the venue’s programme of experimental musicians and is now a member of avant-folk collective Dead Rat Orchestra and a former composer in residence at the Pitt Rivers Museum in Oxford. It was there that he first encountered a display of Chinese pigeon whistles while studying sonic art at Middlesex University. ‘It was the one instrument I genuinely couldn’t imagine the sound of,’ he remembers. ‘I’ve literally spent ten years with it in the back of my mind.’ When invited to contribute a piece to Audible Forces, a touring exhibition of Aeolian (wind-based) works, Mann made a leap of faith. ‘I threw my hat in the ring and said I wanted to do something with pigeon whistles, without having any whistles, pigeons, or any idea of what I was doing. They were excited about it – even though it didn’t actually exist yet – and got me funding.’

Mann teamed up with Peter Petravicius (affectionately known as Pigeon Pete), the only pigeon fancier in the country to train his pigeons to return to a mobile home. The pair instantly hit it off, but when they set to work they encountered their fair share of setbacks. Was there ever a point when Mann thought creating modern, functioning pigeon whistles was an impossible task? ‘There were many moments,’ he says. ‘Sometimes the whistles would just fly off the pigeons and we’d never see them again. There were moments when we thought we’d got the design right, but when I went away and made six identical ones none of them worked.’ And what was their major breakthrough? ‘It was all a breakthrough. There were so many levels of unlikely success. Pete and I are trying to catch up with hundreds of years of knowledge from the Chinese tradition.’

There’s a beautiful arc to each flight – a compositional arc. The ascension and then the resolve as each note slowly comes down to land

Mann’s initial design back in 2013 was made from film canisters, ice lolly sticks and sliver of a Chris De Burgh record; his second prototype was a little less Blue Peter, created using a 3D printer. They’re designed to be attached to the pigeons’ tail feathers – it hardly looks comfortable, but I’m reassured by the care with which Petravicius attaches the whistles in his videos with Mann. The sound the whistles produce is unexpectedly beautiful. One woman at a performance in Brighton described the experience as ‘the closest thing she’d ever experienced to heaven’ and there is something otherworldly about the noise – elemental, ethereal and subtly responsive to the pigeons’ flight.
‘For me it is a composition,’ says Mann. ‘We’ve handed the instruments to the birds and the birds create the music. The pigeons have their own interactions; they display to one another when they’re flying and you can hear that in the sound. There’s a beautiful arc to each flight – a compositional arc I would say. The ascension and then the resolve as each note slowly comes down to land around Pete.’ At the most recent performance the whistles were tuned to five different notes, but Mann is working to expand their range. ‘You could have a microtonal scale over a hundred steps,’ he says. ‘You could have anything really.’

The project is far from completion. Mann and Petravicius want to share the template for the whistle’s design on the internet. ‘People can print out their own whistles, modify it and share the design,’ Mann says. ‘I don’t think it’s ever going to reach a final version.’ After learning of the Vietnamese practice of kite whistles, Mann also wants to use his whistles to create ‘chord fields of different kites’ across a space which listeners can explore.

The pair’s exploration of pigeon whistles is clearly in full flow and liable to develop in any number of directions, but their next step has a pleasing sense of resolution to it. Mann plans to organise a temporary redisplay of the pigeon whistles that first inspired him at the Pitt Rivers Museum in October, adding the whistles he created to sit among their centuries-old Chinese and Indonesian ancestors. Mann and Petravicius’s overarching aims are all about reinvigorating communities. He draws parallels between the pigeon fancier community in the UK and the small number of people still using pigeon whistles in China. Both are in decline, and Mann hopes the project will help. ‘To take our pigeon whistles to China and share them with the pigeon whistle community there would be our dream at the moment,’ he says. ‘Reinstigating interest in pigeon whistles in China through this would be amazing.’ Mann and Petravicius are bringing history back to life while casting light on communities which risk being neglected in our post-industrial world. Wouldn’t it be something if they could really reinvigorate the arcane art of the pigeon whistle?

Mann’s pigeon whistles will be exhibited along their centuries-old Chinese and Indonesian ancestors at the Pitt Rivers Museum, Oxford, in October. prm.ox.ac.uk