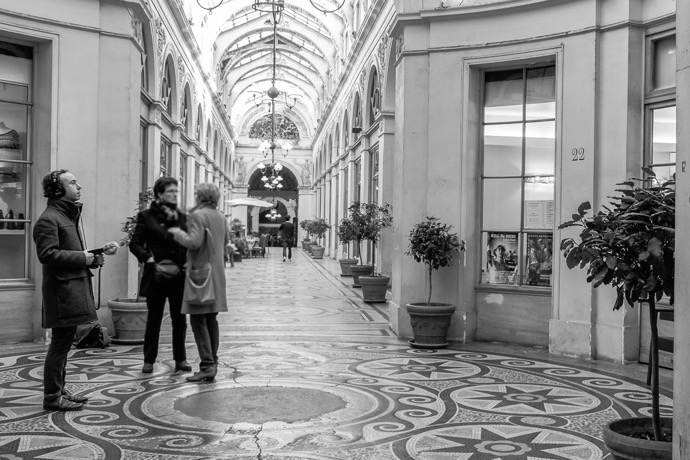 The composer Aaron Einbond makes one of his field recordings. Photo: Soili Mustapaa

Often it is the aim of a composer to strive for novel sounds, for pastures new to delight the listener. Aaron Einbond, however, takes an extraordinary focus on the sounds already around us, preserving them, highlighting them, re-contextualising them. Using a combination of live performers and technology, Aaron’s innovative approach to composition challenges our perception and awareness of the sounds we hear, shining new light on sounds we thought we knew.

Taking a conventional route into music, Einbond began classical training on piano, clarinet and instrumental composition. It was not until much later that he began to get his ‘hands dirty’ with technology, most memorably in a pivotal, post-graduate masterclass at the Royal College of Music with Jonathan Harvey. An interest in and desire to understand how live electronics operated led Aaron to form his own personal approach to composition using technology, influenced and partially sculpted by periods studying at IRCAM in Paris and CNMAT at the University of California Berkeley.

Taking sounds out of context can create other things; listeners can conjure freely what they mean

At the centre of Einbond’s work is the capability of recording technology to bring delicate and perhaps otherwise unappreciated sounds to the listener, allowing them to feel close to and ‘get inside’ the sounds. ‘It started with music on stage in a traditional concert setting…I was using a lot of really quiet and a lot of noisy sounds…it was never my goal to alienate listeners; I wanted to make the audience feel close to the sounds and performers.’ Further exploring the notion of perception, Einbond’s compositional work on the site-specific music theatre project Hidden in Plain Sight allows audiences to be entirely immersed in the sound, as they follow its creation through different sights and environments. Performed as part of the Festival d’Aix en Provence, France, it tells a selection of stories through music, sound and drama in various site-specific locations, and the audience are invited to move through these locations with the performers. ‘Instead of bringing the sounds to the listeners, director Jude Christian and I let the listeners bring themselves to the sound, and explore the site where the work is being created.’ Here, audiences can experience different perspectives on one performance, literally through their shifting kinetic position. ‘It creates a kind of rich experience you can’t always have in a concert hall.’

The ability of recording technology to capture one ‘spontaneous, magical moment’ and preserve it is also a notion at the heart of Einbond’s compositional work. ‘The contrast between the initial instant spontaneity and the sound becoming historicised in these documents is something I really enjoy….Taking sounds out of context can create other things; listeners can conjure freely what they mean… allowing them to build their own panorama.’ 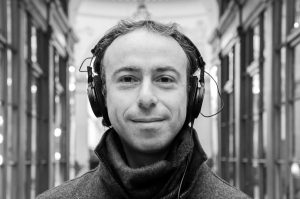 Capturing these moments of improvisation also drew Einbond towards field recording, for its integral spontaneity and unpredictability. His work Le Cabinet des Signes uses a selection of field recordings in Tokyo to create a sonic map of the city. In another of Einbond’s pieces, Without Words, field recordings from a variety of locations are evoked by a collage of sung and spoken texts.

‘Ambient and natural sounds are a kind of avant-garde improvisation. People are performing all the time; having a conversation, crossing the street… I see a continuum between that and what instrumentalists are doing on stage.’

So how do Einbond’s other live performances manifest themselves? Many performances blur the boundaries between the live and the recorded, the performed and the sampled. Through collecting and creating sonic samples, he produces various databases of sounds which are drawn upon in live performance. As the musician performs, the computer will analyse the sound and search the electronic database in real time, selecting a sound which it (or Einbond, in actuality, beneath the complex layers of coding and technological skill) believes to match the performer’s projected soundworld. Here, the distinctions between improvisation, spontaneity and score-based performance are clearly fluid. ‘You could think of this as a cloud of sound dust or iron filings that follow the performers as they navigate the sound space.’

An interview with Einbond would be far from complete without discussing his fascinating use of audio transcription. ‘One thing that happens in most pieces is there are moments where a field recorded sound is transcribed for live instruments; it’s ‘resynthesized and reproduced in a live performance.’ You might call it ‘instrumental resynthesis,’ or an ‘audio mosaic.’ While this approach to sound manipulation and reproduction, as noted by Einbond,  has a long history with spectral composers transcribing natural sound, or even Janáček transcribing speech and Messiaen transcribing bird song, his approach is unique in that it focuses precisely on timbre, rather than pitch, harmony or other more commonly tackled elements. Particularly in the re-creation of field recorded sounds, Einbond is fascinated by the colour of the resulting transcription: ‘It’s an interesting idea to free the sounds from their original context so they can take on new possible meanings. It’s like they’re part of a mosaic from a different kind of sound texture.’

Looking ahead, Einbond hopes to keep ‘pushing to create more opportunities for site-specific music-making.’ Significantly inspired by immersive theatre, he would love to learn more from the genre and further his interdisciplinary collaborations. You can catch a performance of his new work, The Kind of Problem a City Is, on May 9 at City, University of London which will feature space and scenography at its core. It promises to be a truly immersive experience.

Register your place at the concert here: www.city.ac.uk/events/2017/may/yarnwire