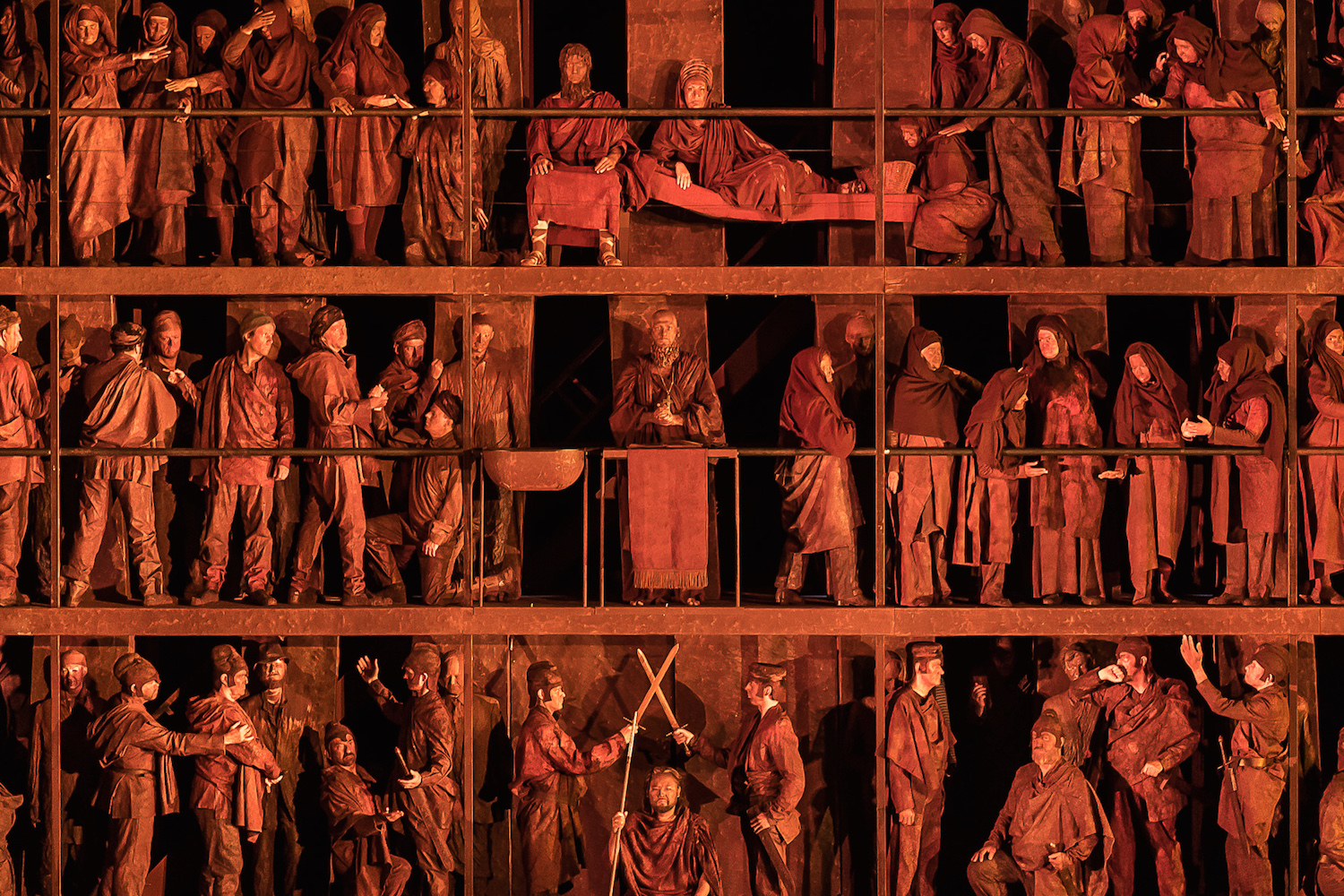 That this is the first UK staging of George Enescu’s only opera Oedipe begs the question as to whether it is a lost masterpiece. In part it is: the Romanian composer has created a gloriously lyrical score to tell the tragic Greek myth. Here is music that glows in late-Romantic colour and inflections of Enescu’s native folk music with modernist flourishes – music that Leo Hussain conducts with aplomb, maintaining a stately tempo appropriate for this regal tale and allowing room for the details and singers to shine.

Proceedings open pleasingly as the image projected onto the safety curtain is repeated for real onstage. Alfons Flores’s design offers twenty boxes, four tiers high, filled with traditional Theban characters, all caked with clay. At the centre of this ancient terracotta army, a burnished and bearded King Laius (solid tenor Hubert Francis) proudly holds his baby Oedipus, before bass John Tomlinson, as blind soothsayer Tiresias, arrives to spoil the party with the revelation that the baby will grow to kill his father and marry his mother. So begins one of the seminal Greek myths, set in this 1931 French-language version by the Romanian all-rounder (prodigy, violinist, composer and conductor), who tells the story linearly from Oedipus’s baptism to his ecstatic death in Athens.

It is the product of La Fura dels Baus, the Catalan theatrical team directed by Alex Ollé and Valentina Carrasco. ‘The horror, the horror’, intones the chorus as King Oedipus emerges self-blinded at the end of Act Three. They may well have been referring to Lluc Castels’ costumes and Flores’ stage design for the act’s dismal, modern-era plague crisis centre, lit in green with walls covered in sweating blood-stained polythene, while boiler-suited medics in gas masks attend to the dead and dying. Or maybe to tenor Alan Oke’s Shepherd, sporting a charmingly rustic high-visibility jacket. Such tropes have become increasingly clichéd as modern directors attempt to lift classical tragedy out of its context and make it more accessible – but why the switch from ancient to modern, unless Oedipus has time-travelled during his reign?

Vocal-wise, the score is heavily skewed towards bass and baritone voices. In the marathon title role, bass-baritone Johan Reuter occasionally struggles to be heard over chorus and orchestra. The star is surely Tomlinson, whose turn as Tiresias is gripping – his voice tender and concerned then, when mocked, powerful and baleful (reminiscent of his signature Minotaur). The ever-engaging mezzo Sarah Connolly makes a glamorous Jocasta – the unwitting mother and wife of Oedipus, while bass Samuel Youn is splendid as the brooding usurper King Creon, and soprano Sophie Bevan makes a loyal and fragile Antigone. Marie-Nicole Lemieux, meanwhile, brings much needed levity as a larger-than-life Sphinx, emerging from atop a crashed Stuka. The ROH Chorus met the directorial demands of singing well while holding the initial tableau, then lying down and offstage.

My reservation? Enescu’s score, though rich and fluid, doesn’t capture the monumental nature of this tragedy (like Stravinsky’s Oedipus Rex), nor is it modernist enough to revel in its horror and perversity (as in Richard Strauss’s Elektra). And with no stand-out arias, but rather endless arioso, it is more a tribute to the class of the singers than to the composer that attention is held over its two-and-a-half-hour duration.