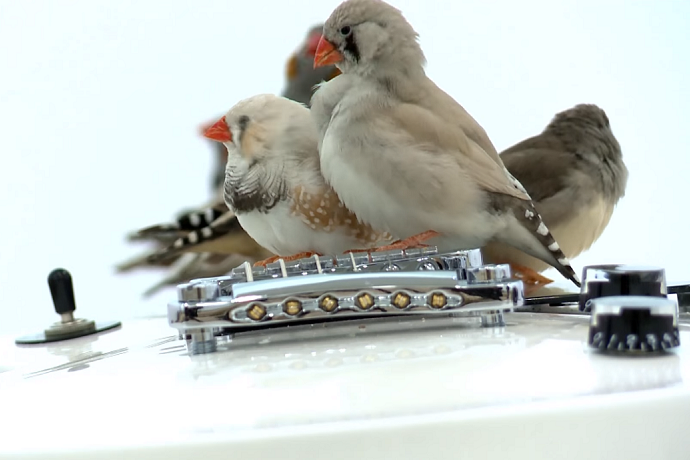 To enter Céleste Boursier-Mougenot’s installation from here to ear v.19 is to leave the everyday world behind. The enclosed space, with its sandy floors and white walls, at first seems empty but for the twelve amplified electric guitars and basses set up around the room. Before long however, small flecks of movement reveal tiny, sharply patterned songbirds flitting about. This world belongs not to the humans who stroll along the walkways, but rather to the 70 zebra finches that have been making music in the Contemporary Art Square in Montreal since November.

It is almost as though human visitors to the birds’ territory take a step into an alternate universe, one in which humans have abruptly disappeared and birds have been given free rein. The habitat occupied by the finches consists entirely of man-made objects: cymbals holding birdseed nestle in the sand, a square box of birdhouses hangs on the wall, and there’s even an attempt to build a nest on a security camera. But the focus is on the instruments and the sounds. When the birds alight on one of the guitars, the connected amplifier emits a pulse, screech, strum or wail that reverberates, filling the space.

At times the musical perches remain silent, and constant birdsong comes to the fore, while at other times two or three birds tussle on the strings and the whole room is filled with noise. This endless but ephemeral song has a similar patternless rhythm to wind in the trees or sea on the rocks, and the overall effect of overlaid chirps and guitar chords is a peaceful one. Time passes easily without my noticing, though the persistent chattering of the birds reminds me that I’m a guest in their realm. Unfortunately the finches themselves are only guests at the gallery – the installation ends on 27th March.