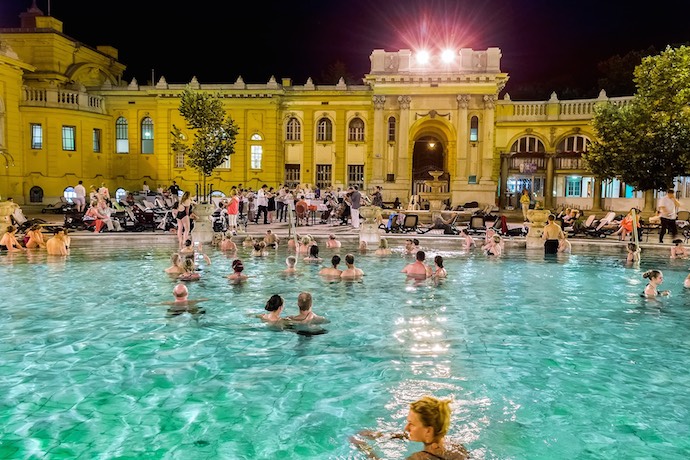 Széchenyi Baths, Budapest
By Pauline Harding
Three-hundred years ago in July, Handel’s Water Music was premiered on a barge floating down the Thames, in honour of King George I of England. This week, the suites received an even wetter centenary celebration – at least for the audience, who trod water as they were serenaded by Budapest Festival Academy students and teachers from the side of a large, thermal pool at the Hungarian capital’s Széchenyi Baths. Onlookers – including the festival’s artistic directors, violinists Barnabás Kelemen and Katalin Kokas of the Kelemen Quartet, and pedagogues such as violinist Mimi Zweig and violist Atar Arad – drifted, swam, floated or sat on the pool steps, dwarfed by Neo-Baroque buildings, curling lampposts, the night sky and a glowing moon. 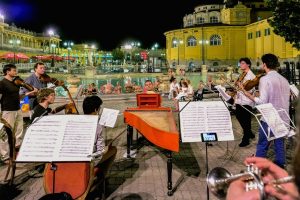 The constant sloshing of water as it smacked the sides of the pool, trickled in distant streams and gurgled in the throats of distracted children was at points more noticeable than the music; but the emphasis of the evening was on novelty and fun, and for that it scored full marks. Musicians included conductor and harpsichordist Jonathan Cohen (in brightly coloured swimming trunks), concertmaster Gábor Homoki, violists Gareth Lubbe and Maxim Rysanov and several other Academy participants, and they gave an energetic performance full of vitality and enthusiasm. True, at points it was obvious that the ensemble had not done much in the way of rehearsal – faster tutti passages weren’t as tight as they might have been, and brass notes were split more often than one would hope – but particularly in slower, more exposed passages where the musicians’ chamber music skills could shine through, some lovely timbres and phrasing could be heard.
By the end of the concert most people had migrated to the sunloungers at the pool’s edge to dry off; and after a break, Homoki and Lubbe treated us to a surprise encore, beat-boxing, singing and duetting with themselves and each other, mixing everything from improvisations to Elvis. Smiles and laughter throughout lifted everybody’s spirits – a sentiment that shone through in the music, resulting in a highly enjoyable evening.