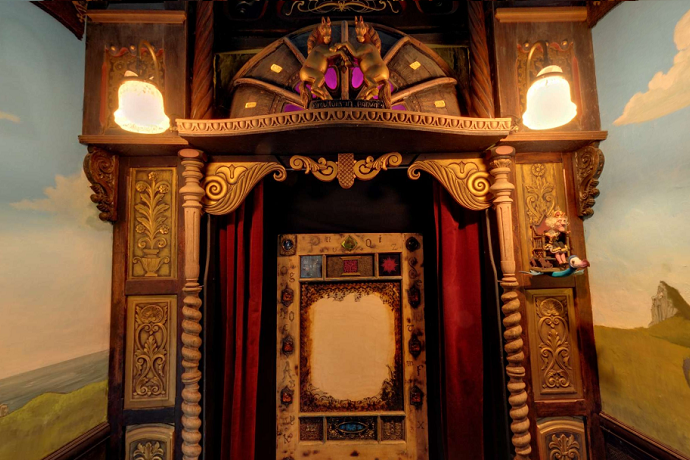 You could mistake it for a Wendy house. It fits twelve spectators, sardine style. In 2002, the Guinness Book of World Records labelled it the smallest theatre in the world. But, inside, it looks like a lavish Victorian playhouse, albeit one for hobbits. There’s an elaborate gilt stage. There’s every conceivable sound effect, produced by part of an old piano. The walls are covered with fantastical designs, ranging from commedia dell’arte figures to rolling hills, which, if you peer closely, double up as ghoulish faces.

The Theatre of Small Convenience in Great Malvern, Edward Elgar’s home town, is somewhat at odds with its ultra-respectable surroundings. It feels like a fantasy world where anything is possible. In fact it was born out of a former gentleman’s lavatory. ‘People think that’s very funny,’ says the theatre’s founder and artistic director Dennis Neale, ‘and it makes good publicity.’ He hasn’t, however, been seduced by the comic potential. ‘You can turn the title of virtually any Shakespeare play into something to do with excrement. But I don’t do the toilet humour myself.’ 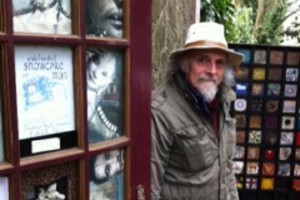 He decided to found the theatre almost 20 years ago, during the building’s second incarnation as a bric-a-brac shop. ‘I used to come in here to buy bits and pieces to make puppets for my children, and I just had this mad idea off the top of my head.’ He didn’t, however, fancy dealing with a lot of paperwork. ‘So, after getting planning permission, I thought I’d keep it very low key and low cost.’ That meant making almost everything himself: the stage, which he fashioned out of plunder from flea markets; the props; even the shows, which placed him in the role of playwright and puppeteer.

Yet, he has no background in theatre. ‘My parents were factory workers: Mum worked part-time in a factory making bullets. They did have a couple of books that were given to them at their wedding: things like ‘How To Do Up Your House 1930s style’, but nothing else. I never saw them read or even open a book, and we never went to the theatre.’

Were it not for Birmingham City Council, and its local library, he insists, he wouldn’t have had any sort of education. So where did his interest in theatre come from? He doesn’t really know. ‘I’ve had lots of jobs. I’ve spun yarns in a factory, I’ve done forestry surveying in Wales, and I’ve been an assistant social worker in mental health. But I’m really quite ignorant about theatre.’

In some ways, he insists, that has proven to be an advantage. ‘I don’t have preconceptions. In fact, I would probably have a bias against certain things you would favour. Everyone talks about Shakespeare, for example, but I haven’t seen much of it that I’ve enjoyed. Of course, when people hear you say that they instantly switch off because they think you’re not “of the order.” That said, he has staged Shakespeare plays, along with improvised puppet sketches, new plays by local writers, and once, a full day of opera.

And music regularly pops up in his shows, though he prefers to call it ‘anti-music’: ‘We’ve had “Titus the Too Tall Dancer”, where you only saw his legs. Then there was the “Deep Sea Diva”, who sang underwater.’ For his next show he’s planning something similar: ‘It’s a satire on the church. I’ve made a bishop out of a violin scroll, and used two violin pegs for ears. Instead of preaching the gospel he’s preaching breves and clefs. All the ecclesiastical terms are replaced with musical ones.’

For Neale, evidently, finds the surreal irresistible. ‘I guess I’m a bit anti-everything, a bit of a Terry Gilliam.’ He certainly looks the part: with his pointed grey beard and pixie-like features, he could almost be a citizen of Narnia. And I sense that he enjoys being the lone wolf, keeping the show on the road singlehandedly. He charges £3 for tickets; he doesn’t ‘do’ business cards, advertising or outreach projects; his income and rental costs are fairly similar. So what spurs him on? ’I thought from the start that if people said my shows were rubbish then I’d stop. But people kept coming,’ he says, ‘that’s why I keep going.’