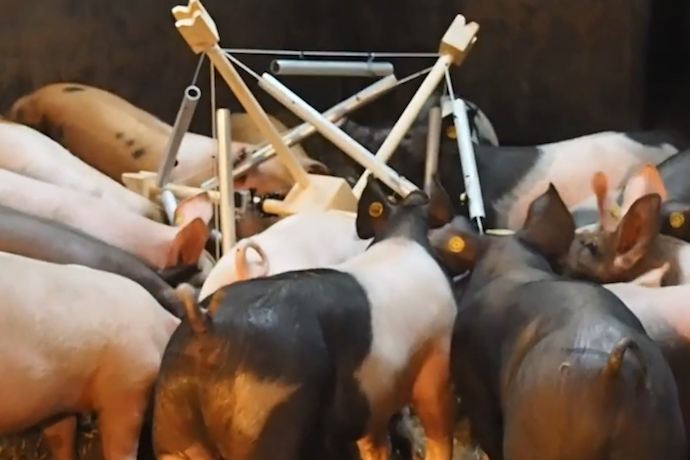 How do you create an instrument for pigs? Isn’t the very concept of a pig playing an instrument slightly ridiculous? Not for Marie Caye, a final-year student at Design Academy Eindhoven in Holland, who, until this January, will be exhibiting her Pigstrument – a complex and durable wooden structure featuring tubular bells designed for pigs to play with their snouts.

Caye has previous experience when it comes to making weird and wonderful instruments. An earlier project, the MBO-D, involved three performers wearing Nintendo WiiMotes and ‘tuning’ an instrument via a yoga routine. ‘I really like pushing the boundaries of what we expect from musical interaction,’ Caye tells me. ‘I don’t have a musical background and I don’t play any instruments, so that gives you a completely different perspective.’

The vocals of a pig are very high pitched, and I think this means they have a taste for more high-pitched noises.

But why pigs, you may ask. ‘Everything in our society revolves around food production with pigs,’ Caye explains. ‘There’s much more interest in the behaviour and facial expressions of monkeys, cats or dogs.’ Caye, who herself is vegetarian and has a deep interest in animal rights, is keen for us to stop seeing pigs merely as food. ‘You can really feel a connection with them and see that they are kind of smart,’ Caye argues. At Vair Buitenvarkens, a welfare pig farm in the Netherlands, farmers reported that the pigs spat stones at a metal fence to produce sound, which led Caye to consider if pigs can be said to have ‘a musical culture’. 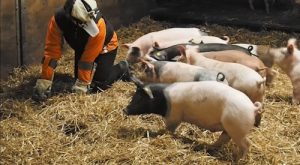 Caye in her Pig Empathy Suit

Caye went to extraordinary lengths in researching the Pigstrument. Having difficulty ‘throwing away my human mind and designing entirely with a pig mind,’ she decided to create a Pig Empathy Suit to see the world from a pig’s-eye view. The suit made it possible for Caye to spend hours on all fours and accustomed her to not being able to use her hands. ‘A lot of things clicked,’ says Caye. ‘It’s not very precise research, but you get a feeling for their environment.’

This very hands-on form of research was not without risks. ‘Pigs are very curious and they will bite you to figure out what you are,’ says Caye. ‘You really have to get used to the smell too – it’s quite acidic.’ The insights she gained, however, were key to the eventual design of the Pigstrument. She realised that pigs do everything together, with a dominant pig likely to monopolise each new object to make sure it was safe. Caye would need to create an instrument large enough for all the pigs to use simultaneously.

Caye collaborated with Arvid Jense to design a structure made from tubular bells, their research showing that pigs responded best to a high-pitched metallic sound. She hasn’t found scientific reason for this, but in light of research by David Teie (whose CD Music for Cats was number one on Amazon earlier this year), Caye believes that, while human ideas of music develop in the womb (our sense of rhythm coming from our mother’s pulse), a pig’s experience is markedly different. ‘In the womb they hear all their siblings – it’s much noisier,’ Caye suggests. ‘The vocals of a pig are also very high-pitched, and I think this means they have a taste for more high-pitched noises.’ 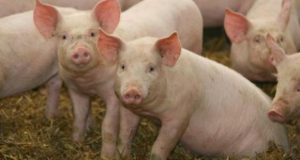 There are many others ways in which the Pigstrument is impressively fit for purpose. Finding that pigs were likely to destroy any floor or wall-mounted installation, Caye and Jense decided to make an instrument that pigs could turn with their snout. What’s more, the tubular bells were designed so that flipping the instrument would produce different harmonies and keys. ‘There’s a lot of triangulation and it’s very strong,’ Caye adds. ‘The pigs can really go crazy and it doesn’t break.’

What’s next for the Pigstrument? Caye has tested her design on over 60 pigs and found that ‘in all cases they were more interested in it than in just any random object, so there seems to be a real interest in sound for pigs.’ Though she currently plans to begin work on a more human-orientated project, Caye hopes to conduct further research on the Pigstrument and its potential to improve pigs’ quality of life. ‘I have contact with farmers that have hundreds of pigs in the same hall, and they are very interested. Contrary to what we think, they would like to provide a better life for their pigs, they’re just economically stranded.’

At the very least, Caye’s research should teach us to be more open minded about animals’ capacity for a musical culture. Though an instrument for pigs may initially sound rather comic, Caye’s project does have serious implications which aim to make our view of the world a little less anthropocentric and improve animal welfare.

Pigstrument is on display from December 16–January 20 at Plusmínusulá Galéria, Žilina, Slovakia