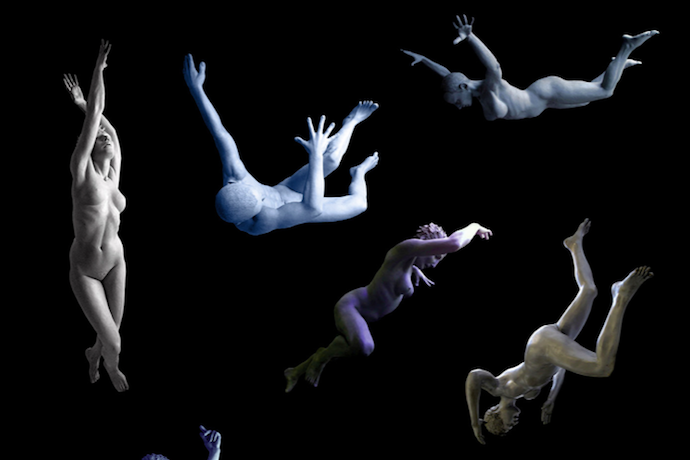 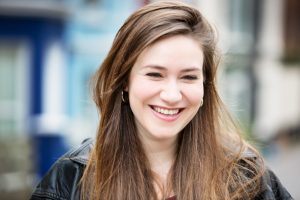 In a bar perched on the 15th floor of the St. George’s Hotel in Oxford Circus, sculptor Josie Spencer and her daughter, composer Freya Waley-Cohen, are arguing about how to interpret each other’s work. Spencer, 74, says her art is a direct response to human selfishness and greed, railing against Brexit and Trump with a New England twang. ‘The only real difference between humans and simpler creatures is that there’s no other species so efficient at killing each other,’ she says simply. ‘That’s such a pessimistic view of humans,’ Waley-Cohen, 29, shoots back. She’s more of an optimist, British and softly spoken, insisting upon the beauty in her mother’s art and preferring to tackle less overtly political or gloomy subjects in her music. 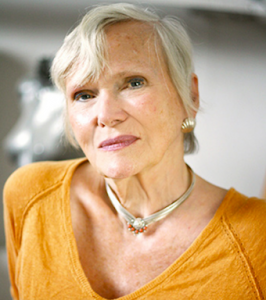 Spencer has been working on her upcoming exhibition, Murmuration, for five years. It opens at London’s Playground Theatre in early May and  is a collection of nine bronze figures, suspended from the ceiling in a state between falling and flying. She couldn’t quite articulate the meaning behind the figures until she’d already made half of them. She realised then that they were a murmuration: a flock of birds which has become an imploding cloud in response to a predator. Inspiration struck when Spencer was walking her dogs on Wormwood Scrubs, seeing starlings dive into the centre of the group so the local kestrels would attack the rest of the flock first. She thought humans responded to emergencies in a similar way, becoming governed by self-interest and putting ‘I’ well before ‘we’.

Spencer’s exhibition will also play host to six contemporary classical world premieres, curated by Waley-Cohen, Josephine Stephenson and William Marsey in a one-night only concert on May 9th. The trio has organised concerts since 2012 through a series called Listenpony, which aims to take classical music out of concert halls. The programming reflects Waley-Cohen’s eclectic tastes: there’s ‘old music’ from the classical canon; ‘new music’ with contemporary classical premieres; and ‘pop music’, including folk, jazz and acoustic music. ‘As a concertgoer I like variety,’ she says. ‘It’s the music we love regardless of time period or genre. That’s how we consume music nowadays. When you listen on your phone you skip between different genres.’

By taking something we’d rather not see and finding the beauty in it, or making an image so striking that it’s impossible to move one’s eyes away, we may reveal the character of our times

Waley-Cohen will also be premiering a new work for the pianist George X. Fu, which she thinks will respond directly to her mother’s sculptures. She’s yet to write it when I interview her. The sculptures have inspired her before: five years ago she wrote a piece for solo bassoon inspired by the intense expression in the eyes of Spencer’s sculpture Icarus Dreaming. In less direct ways, Spencer’s influence has brought out an interdisciplinary strain throughout Waley-Cohen’s music.

In Permutations, which premiered at the 2017 Aldeburgh Festival and goes on tour this August, listeners move between six chambers, each playing a different pre-recorded violin part played by Waley-Cohen’s sister, Tamsin. By opening and closing doors, the audience can change the music and use the space like an instrument. ‘I don’t think I would have thought of Permutations, having not grown up with a mother who’s a sculptor,’ Waley-Cohen says. ‘When we were younger, she talked about how she mould things in space and I mould things in time.’ It was a simple step for Waley-Cohen to experiment with the way that space, as well as time, could impact her music.

Waley-Cohen’s father was a theatre manager and producer. She has two uncles who are writers and a great aunt who is a painter and author. ‘It didn’t actually occur to me until quite late in life that everyone in my family is in the arts,’ says Waley-Cohen. ‘There were lots of different artistic influences in the house, and if you grow up with that there’s not necessarily this idea that different art forms have to be completely separate.’ 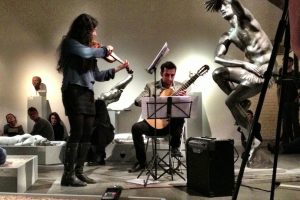 A previous Listenpony event at a Josie Spencer exhibition

Spencer shares this interdisciplinary perspective. She goes to just as many concerts as Waley-Cohen and always listens to music while she works. One of the key influences on her sculpture is contemporary dance, particularly in the case of the floating sculptures in Murmuration. ‘There have been the most extraordinary pieces of choreography, which have completely defied gravity,’ Spencer says. ‘A lot of contemporary dance is beautiful, but it can be absolutely tortuous too and very expressive of psychological states. When you act in an extreme moment your whole body is a reflection of that moment.’ The expressions on Spencer’s Mumuration sculptures are a complex mix of panic and peace. As with the dancers she admires, every muscle betrays emotion. 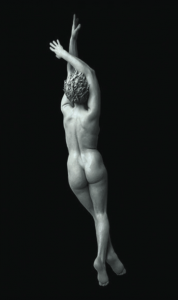 Spencer chooses to focus on the downbeat political overtones of her work. The first of the nine figures, Freefall, is a response to the 2008 banking crisis, while Lashed, one of the many fragments which will also be displayed, is a response to the ‘female slave trade’. Yet the delicacy and lightness with which Spencer portrays the human form is an antidote to the heavier themes in her work. ‘There’s this huge sense of freedom and vitality about them,’ says Waley-Cohen. ‘They’re fluid and light.’ Waley-Cohen, for her part, also bats off Spencer’s interpretations of her music. ‘When you’re asked to characterise your music, anything you say always narrows things down and gives people an excuse to listen in a lazy way,’ she explains.

It gradually emerges that Spencer may be a closet optimist. ‘I feel this constant desire for the world to turn a corner and to be released from this worry about what’s going on now,’ she says. ‘I want to make things that celebrate the extraordinary ability and beauty of humans as well.’

Then again, beauty may just be the most striking way to convey a serious message. ‘By taking something we’d rather not see and finding the beauty in it, or making an image so striking that it’s impossible to move one’s eyes away, we may reveal the character of our times,’ says Spencer. It’s a powerful manifesto for an artist. Perhaps we don’t face a choice between Spencer’s apparent pessimism and Waley-Cohen’s optimism. The sculptures are both beautiful and disconcerting, both a monument to human grace and human selfishness. As the twinkling lights of the London skyline roll away beneath us, it’s impossible to say whether Spencer’s sculptures are flying or falling.

Josie Spencer’s Murmuration runs at the Playground Theatre from May 3rd-19th. Freya Waley-Cohen’s curated concert takes place there on May 9th.