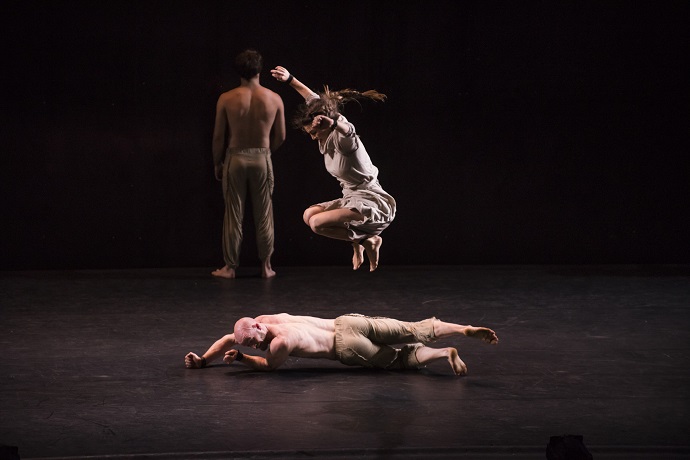 A scene from ‘The Return’ by Circa. Photo: Tristram Kenton

The Return, performed by Australian company Circa, is not an easy show to watch. Gone are the playful antics and cabaret and burlesque elements characteristic of previous shows Beyond (2013) and Wunderkammer (2010). This is serious stuff, the undercurrent of suffering, war and oppression reflected in muted, almost drab costumes, a sparse stage and live excerpts of Monteverdi’s Il ritorno d’Ulisse in patria, recalibrated for a chamber ensemble and two soloists, tenor Robert Murray and mezzo soprano Kate Howden (both excellent). The singers and musicians are amplified, but sensitively, and this makes the transitions to repetitions of the music ‘in shattered electronic forms’, to quote Director Yaron Lifschitz, all the more seamless.

In his Director’s Note, Lifschitz tells us of a man who is ‘trying to get home. A woman is waiting for a man who hasn’t arrived. The two are separated by history; by years of war and wanderings … They share the dream of home.’ Yet, like all of Circa’s work, The Return is non-narrative. Indeed, Lifschitz, a trained theatre director, has himself admitted he ‘lacked the ability to tell stories’. Since taking over Circa in 2004 (the Brisbane-based troupe’s origins date back to 1987), Lifschitz has been able to indulge his passion for exploring emotion through physicality by asking questions that have multiple answers. And The Return is no exception. What are these characters searching for? What are they scared of? They’re eventually drawn towards the light, but where is it leading them? By the end, we may not know the answers but, when every gesture has such emotional resonance, somehow it doesn’t matter.

But lest this is all beginning to sound far too serious for its own good, rest assured that Circa’s trademark fearless physicality – acrobatic tumbles and spins, astounding gravity-defying leaps and falls, and impeccable timing – remains at the fore. There’s the seemingly fragile yet deceptively powerful figure of Bridie Hooper on the dual ropes, spiralling headfirst down to the floor with a speed that takes your breath away. And the strength of Nathan Boyle, standing firm as an oak tree as dancers climb and scramble up him to ever-dizzying heights. And then there’s the balletic beauty of Brittannie Portelli as she dives and swoops from a suspended cube-cage. At one point, the three men slam themselves aggressively into the floor with a force that draws gasps from the audience. A similar reaction is provoked by the breathtaking human towers, men lifting women, women lifting men, culminating in free-fall descents that look certain to end in tragedy. Yet nothing is gratuitous or done for sheer entertainment value; the dancers remain in character, their high jinks underlined by a sense of emotional purpose and connection.

Sometimes I longed for more beauty of movement. The gestures are at times convulsive, feral even: one dancer manipulates another as if she were a puppet; one slams another against the wall, pinning her there with his foot. And do we really want to hear these dancers panting, see them gritting their teeth, witness their physical pain? It’s not all pretty – but then, neither is life.