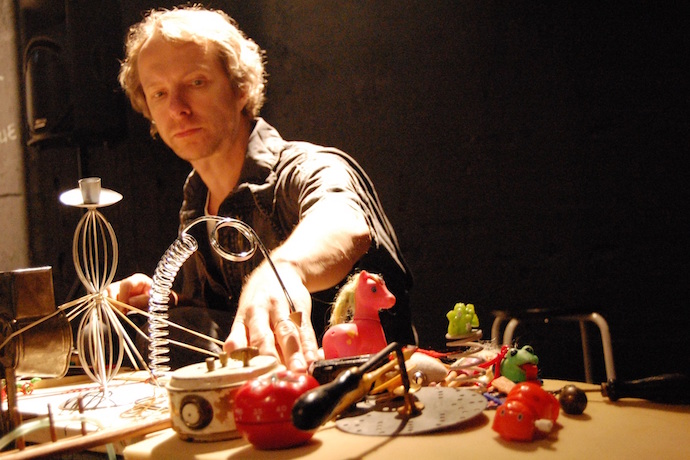 ‘I’m not really into pain,’ says Johannes Bergmark, contemplating an extraordinary image of a naked man whose body is pierced by the strings of a huge harp. The Hell Harp Project has been preoccupying Bergmark for two years. ‘I mean…how can I suspend myself in the harp without injuring myself? he asks. And we both ponder the disturbing plausibility of recreating a real-life torture harp from Hieronymus Bosch’s famous Renaissance triptych, The Garden of Earthly Delights.

Bergmark is totally serious. I’m chatting to this remarkable Inventor-Performer-Artist-Composer-Musician by Skype on a busy street in Greece, punctuated by gaps to let noisy motorbikes pass. Bergmark is as uncategorisable as his imagination is boundless. He’s also rather pragmatic with a good head for production, budgets and the logistics of stringing oneself through the steel wires of a harp. ‘I want to be able to play it’ he reasons… ‘but a body will make the sound less resonant’.

Surrealism isn’t a cultural movement but an attitude. It just means that you do music with a surrealist attitude.

The Hell Harp may still be at the conceptual stage, but this ‘circling around being a musician’ (as Bergmark describes his practice) is central to all of his work. From a very young age, Bergmark was as motivated by the idea of dismantling a piano as he was playing one. As a teenager, he extracted himself from what looked set to be a conventional musical education and threw himself into a self-imposed melee of free jazz, rock, fusion, electronic and contemporary music. ‘Anything I couldn’t understand really,’ he says. ‘I was just curious.’

His innate curiosity and desire to learn led to an impressive education. Bergmark studied musicology at Stockholm University and philosophy at Lund. In the 1990s, he trained to be a piano technician followed by four years of piano and harpsichord building at the Musikk Instrument Akademiet in Moss, Norway. He studied street theatre, jesting, slapstick and physical theatre at Stella Polaris and electroacoustic music at ElektronMusikStudionnin. But he credits much of his fascination with tinkering, improvisation and visual art to his time working with with masterful inventor Hal Rammel. Unwilling to compromise, Bergmark was not successful in his early attempts at forming bands but he did discover a creative framework in surrealism. ‘There has never been a musical style associated with Surrealism,’ he explains.  ‘Surrealism isn’t a cultural movement but an attitude. It just means that you do music with a surrealist attitude.’ 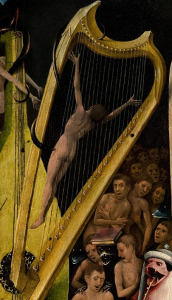 The harp from ‘The Garden of Earthly Delights’

That surrealist attitude permeates all his work. Exploring Bergmark’s website is like falling down the rabbit hole, becoming ever more lost in a dream-like laboratory of ideas, concepts and artistic projects in various embryonic states of growth. I stumbled across a promise of an ‘Audio Perfume’. It turns out to be a defiant ‘anti-musak music-blocker’, eight roaring minutes of ‘every tune I have ever hated’ layered on top of one another. You can’t close your ears to unwanted music, argues Bergmark, just like you can’t close your nose to unwanted smells. There are generous Top Tip pages such as ‘How to make contact microphones cheaply out of piezo buzzers’, and a lovely illustrated article on playing the saw (haunting and beautiful). There is passion in his manifestos: ‘Why I hate blogs, facebook, myspace and youtube’ is an attack on the social media that is ‘degrading to humanity’. Yet its hard not to warm to Bergmark’s honesty and self deprecating humour. The vitriolic post is followed four months later with a PS that reads ‘OK. I changed my mind a little bit and subscribed to some blogs’. And again, three months on with a PPS (‘OK. I changed my mind again’) where Bergmark has reluctantly embraced social media in order to promote his gigs.

But its Bergmark’s physical theatre projects that make you believe that if anyone can pull off a Hell Harp, this man can. In ‘Stringed Stirrups’ Bergmark appears as performance-artist. Half masked-puppet, half sound-machine, he is suspended in a black box space, strapped with wires and resonators to his face and chest. It’s a chilling, visceral and acerbic work. Bergmark bows and hits the wires which groan, moan and twitch. The combination of the body as theatre, instrument, prisoner and controller is profoundly disquieting.

Johannes Bergmark has the ability to shock, but to focus solely on the darker works would be to undermine the playfulness of this artist. His delightfully kitch Kaleidochord is a harpsichord keyboard with a vertical soundboard that has been exhibited and played in ten UK museums since 2000. Each of the 61 keys triggers a different sound; egg slicers are beaten, seed packets are shaken, plastic toys are scraped and bottle caps rattled. It’s a feel-good hands-on wunderkammer  – perhaps more visual than timbral – that reminds us of the joy of everyday objects. 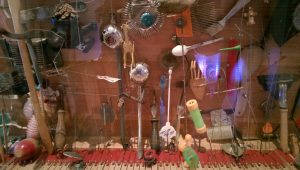 ‘Do you know how many sounds you can get out a playing card?’ Bergmark suddenly asks me. I don’t, but based on his deep curiosity for materials and the endless ways in which sound emerges from their physical properties, I am guessing that the answer is ‘very many’. Bergmark has a great love of unloved things, creating anthropomorphic art from them that is often endearing, simple and beautiful. One of my favourite pieces is Androgynous Stones where Bergmark tenderly extracts a myriad of sounds from a head-sized two billion year old rock cut in two. Its like watching a devoted father coax the first spoken words from his toddler. ‘It might be good to forget about the fate of music sometimes.. and just play with all available means’ he writes. Perhaps Bergmark’s most important message is a constant reminder of the riches of the ‘poor man’s utopia’ all around us.