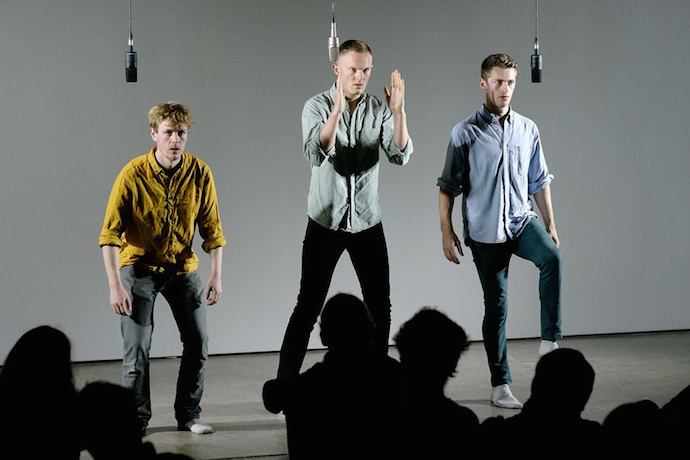 The composer collective, Bastard Assignments, is known for testing the relationship between sound and space. Its curated event, New Teeth, provides a platform for composers and performers to explore, challenge and experiment with preconceived notions of what constitutes art. Events take place in unconventional venues – a balcony and a bombed-out church are just two of the auditoriums that have been hired in the past – and the latest was no exception. Sitting cross-legged on the concrete floor of Block 336, an open-plan gallery space in Brixton, we were casually invited to participate in the performance, beginning with Edward Henderson’s composition, ‘The Solid’.

Even before the evening had begun, Henderson was visible, lying sideways against a wall, with two reading lamps spot-lighting his face and feet. Without an accompanying score, he conjured up the ludic ‘living sculptures’ of Gilbert and George, or the meditative statues of Anthony Gormley. Like both these artists, his supine form encouraged us to come closer and inspect his unexplained presence, foregrounding the importance of the human body to subsequent pieces.

One such was Neele Hûlcker’s creepy yet masterfully timed composition, ‘Crackles’. Filled with touches of humour and flashes of the macabre, not least the haunting image of miniature plastic hands caressing microphones, Hûlcker’s automaton-like trio generated uncanny movements that made the audience disconcertingly aware of their own. But the richest piece was Andrew Hamilton’s ‘In Beautiful May’. This august sound collage is a musical history of love and obsessive desire, with influences ranging from early 18th-century Baroque to 90s pop. Marrying Schumann’s Dichterliebe and Handel’s Alcina to the songs of Take That and Westlife, Hamilton interpolated these spliced sounds with moments of silence and efforts to perform various phrases on his violin. His dovetailing of classical and mainstream cut to the core of what Bastard Assignments and New Teeth is about: the brokering of new faces, sounds and spaces, not at the expense of musical traditions and tastes, but in an attempt to revitalise and revamp them.