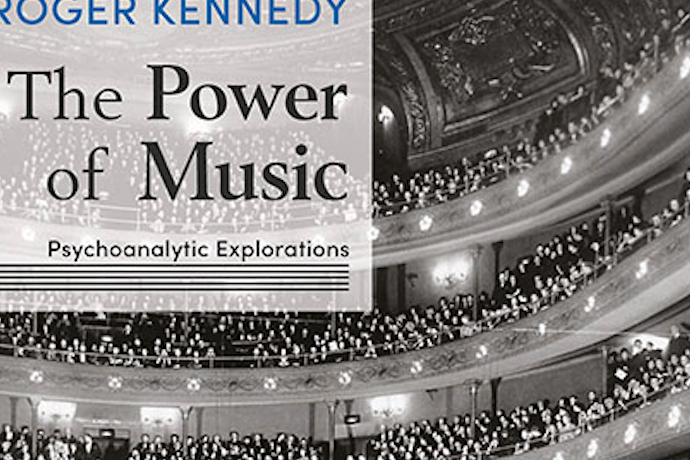 We are all aware of music’s capacity to manipulate our emotions. Some may shed a tear to a nostalgic pop ballad, while others are stirred by the patriotic sounds of their national anthem. However most of us spend very little time considering why a collection of sounds can affect us so. In his recent book The Power of Music, psychoanalyst Roger Kennedy aims to explore this mysterious relationship between music and emotion, as well as the connections between music and psychoanalysis.

To tackle this broad topic Kennedy discusses many theories, touching on his personal specialism of psychoanalysis as well as aspects of neuroscience, evolution, biology and culture. A diverse range of experts from each field are quoted and referenced throughout. For example in his fifth chapter, ‘Music and emotion, second movement’, Kennedy jumps from the ideas of Plato and Aristotle to those of Aaron Copland and Marcel Proust. This variety provides the reader with an insightful and well-rounded introduction to music’s origin and purpose.

Kennedy also references a huge number of musical works and composers, even if these references are much less expansive. Genres such as pop and soul music are mentioned, however the book remains predominantly focused on classical and romantic works. Presumably this is due to the author’s own interests and emotional experiences. While his musical examples may not be familiar to every reader, very little existing knowledge is required as Kennedy gives brief explanations to any technical terms used.

Like emotion, music is highly ambiguous as its origin and effect on us remains difficult to define. So, rather than claiming any one idea to be correct, Kennedy presents a number of potential theories in each chapter. For example, when discussing the evolution of music, he sets out the position of certain professors, who suggest strong links between music and language, as well as that of Darwin, who believed that music evolved like birdsong, as a means of charming and impressing others. Each idea is organised and evaluated in an essay-like style, but ultimately it is left to the reader to come to a conclusion. The multitude of possibilities Kennedy presents only adds to the mystery of music’s power.

However, in chapters focusing on psychoanalysis Kennedy is slightly clearer in his views and includes some personal experience. Although on the surface the two specialisms seem unrelated, Kennedy draws clear comparisons between musical and psychoanalytical listening. He argues that each require a layered listening approach, with both emotion and intellect playing a part. Kennedy emphasises the importance of ‘musicality’ in his job by describing how listening to the tone, rhythm and pitch of a patient’s voice informs his approach as much as that patient’s choice of words.

There are already a number of books available that bring together music and psychology. However, unlike others, The Power of Music focuses on links between psychoanalysis and music itself, rather than the reasons why a musician may seek psychoanalytical help. This more general perspective makes for a unique and thought-provoking read. Kennedy’s multidisciplinary approach ensures every reader will learn something new, no matter what their area of expertise. For some it may be the phenomenal ability of newborn babies to comprehend music, and for others it will be an understanding of how music embodies emotional journeys. You will also likely be left with a sense of curiosity, as this book acts as a strong reminder of music’s capacity to trigger powerful and complicated emotions.

The Power of Music by Roger Kennedy is published by Phoenix Publishing House.