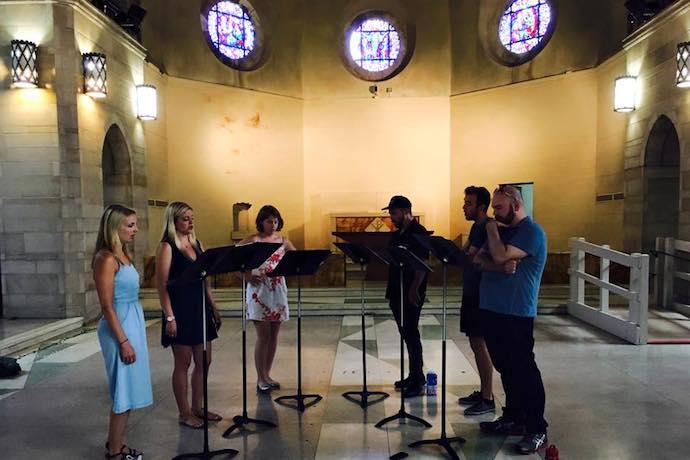 ‘Flow, My Tears’ is a paradoxical exhortation, because it suggests a desire to weep that the body isn’t answering. It’s also an ideal title for a concert exploring not only the lyricism of lament, but also the pre-rational, inarticulate utterances of voices stopped by grief. Variant 6, comprised of some of Philadelphia’s finest singers, faced this paradox head-on in the opener to their second season.

The programme was headlined by a spectacular performance of Arvo Pärt’s Stabat Mater, in collaboration with members of the Prometheus Chamber Orchestra. The combination of a relatively brisk tempo with utterly precise but never laboured articulation in the strings lent this rendition an ethereal lightness, tempered by the heart-rending depth and impeccable blend of the three voices.

It was an inspired choice to follow the Pärt with Pelle Gudmundsen-Holmgreen’s Sound 1, a meditation on inarticulacy that felt — knowing the virtuosity of the singers — at once poignant and absurd. Spoken word pieces tend to elicit a certain restlessness and awkwardness in an audience — a chuckle of relief almost always precedes applause. The performance was almost comically well executed, but standing in the shadow of the Stabat Mater, it seemed to draw attention to the frustrations of performed grief.

The Franco-Flemish laments that followed, though competently performed, were not quite as striking as the Tre Motetti of Bruno Bettinelli, which comprised perhaps the finest ensemble singing of the entire concert. The text of the Ave Verum in particular felt like the thematic heart of the programme, an allegory for the violence done to the grieving mind when lament is being forced into expression, into song.

The resolution to the opening paradox came at the very end of the programme. Gudmundsen-Holmgreen’s Song picked up where Sound 1 left off, the percussive fricatives in the bass and the sustained note in the soprano eventually finding their way to a major-key rendition of Dowland’s Flow, My Tears. It was disjointed, of course: the Dowland appeared gradually, layered over spoken syllables in what sounded like a desperate suppression of the involuntary nonsense-expressions of an anxious mind. The final utterance was incomplete — ‘flow, my’ — but utterly beautiful. Tears, we learn, will not flow on command. The body resists, but there is such music, as Variant 6 demonstrated, in the resultant disharmony.