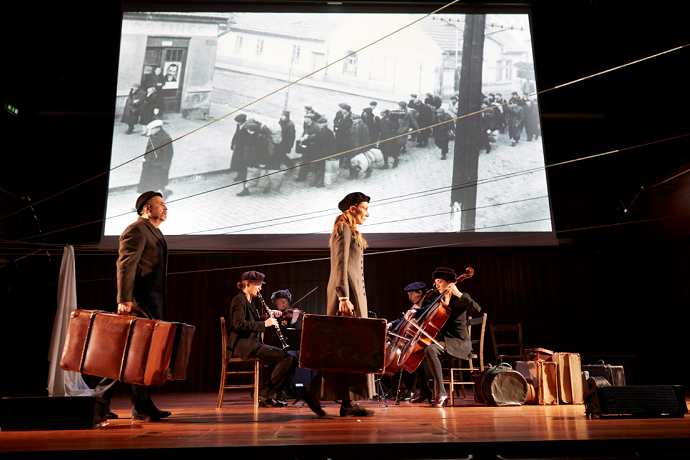 Life and death, and the road that leads us from one to the next, have always fascinated mankind. Perhaps that was part of the allure of this production by composer Jocelyn Pook, director Emma Bernard and videographer Dragan Aleksic, which saw a full auditorium at the Barbican Centre’s Milton Court this January. The work took its audience on a journey into Terezín concentration camp – initially believed by many Jews to be a safe haven from the Nazis – using a poignant combination of cinematic material and live music. It was commissioned by the Jewish Music Institute to commemorate the camp’s dissolution in 1944.

Excitement turns to despair as we follow a couple on their journey into Czechoslovakia: a train, displayed on a screen surrounded by wartime props and flat-capped musicians, chugs on into the unknown. The ride soon becomes riddled with foreboding, with a stabbing soundtrack of strings, clarinet and accordion; spotlights throw shadows of the performers over the walls, and we arrive at the camp. As the story progresses, drawings and messages from child prisoners glide by, interspersed by wartime footage and videoed interviews of camp survivors.

To punctuate the performance, soprano Melanie Pappenheim and tenor Lorin Sklamberg sang a recurring minimalistic line consisting largely of two pitches. Presumably this was intended to represent a combination of mindless routine and despair in the camp, but it was often out of tune and soon began to grate. The lively band of instrumentalists provided some aural relief in the form of Jewish melodies, macabre cabaret tunes and harmonic shifts, but this was generally overshadowed by a dread of the singers’ return. It was difficult to decide whether this was a clever compositional device or exactly the opposite.

There were some touching moments: a philosophical message written by a child on the subject of death; a survivor reflecting that he had ceased to be a child the moment he had entered the camp; choir and soloists passionately chanting, with increasing fortitude, ‘We will not die!’ Yet overall, I was left with the sense that it was the concept of this production that held all the power – something that was largely lacking in its execution.