Musicians and visual artists explore their relationship with different spaces around San Francisco, including the gardens of the De Young Museum, the Contemporary Jewish Museum and the Gray Area Foundation for the Arts.

Part of the Sanatorium of Sound festival, this sound-and-visual installation by Olivia Block is held in various rooms in a dilapidated sanatorium previously used for treating tuberculosis patients. It explores the movement of air in various forms and is inspired by the history of the sanatoria and treatments of tuberculosis.

A series of conceptual pieces for solo performer and video by Berlin-based composer Johannes Kreidler, who works in the mode of ‘expanded composition’. His compositions, while musical, are not about music, but rather the systems, economies and regimes that dictate the place of music in our world.

Highlights of this multi-arts festival include a concert of works by Mozart for clockwork organ, glass organ and other unusual instruments; a reading from Seamus Heaney’s Aeneid alongside a live soundscape by composer and cellist Neil Martin; a piano recital from Utsav Lal fusing reels, ragas and jazz; and free performances from leading international musicians in some of Kilkenny’s most picturesque outdoor spaces.

6. Nico and the Navigators, Germany 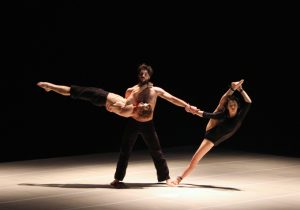 This show, by the Australian acrobatics troupe CIRCA, combines stripped-back acrobatics with Baroque opera in a new spin on the theme of European displacement resulting from World War II . The opera is Claudio Monteverdi’s Il Ritorno D’Ulisse in Patria, interlaced with folk song and new compositions.

As part of Sound @ Nissan, a project that uses sound as a tool in the urban development process of Tullkammarkajen in Halmstad, Sweden, audiences are invited on a sound walk along Nissan – the river that runs through Halmstad.

Eastern Bloc, a collective that specialises in new media and interdisciplinary art, presents a weekly series exploring the work of sound artists and DJs in a Montreal back alley.

Stories from the Old World, an Irish Literature themed event featuring composers Vyvienne Long, Dave Flynn and Anne-Marie O’Farrell, forms part of this Irish multi-arts festival. Another highlight is ‘Composing a New Island’, a day of 21st-century Irish compositions across the genres of classical, traditional and jazz.