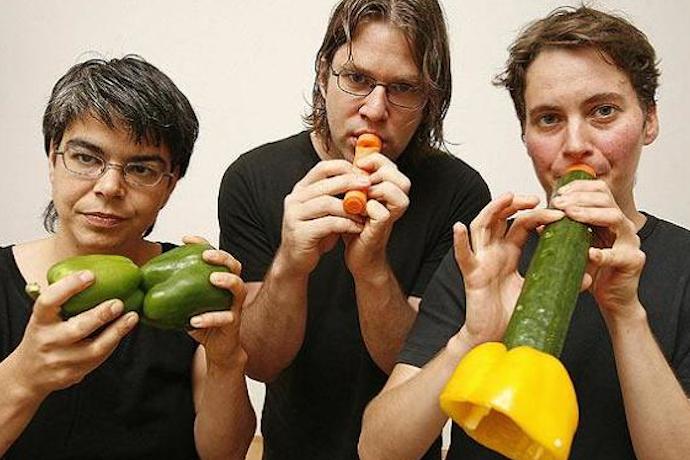 Pumpkins sound better in autumn, Matthias tells me. Yes: generally speaking, they’re bigger, plumper, better… better because they tend to give off more bass but this of course depends upon the temperature in which they’re stored. If they’re not stored at the right temperature, then they begin to shrink and wither, and it becomes much more difficult, Matthias continues, to achieve that ‘pure vegetable sound.’

Matthias Meinharter speaks about the Vegetable Orchestra with an enthusiasm you might expect from a member of a newly-formed band, one still very much in its infancy. And yet—far from being in its salad days— the ensemble was formed nearly twenty years ago in Vienna. Since then, it has played in houses all over the world, using only local produce to perform. Meinharter is one of the original members and explains how the project, which began in 1998 as ‘just a fun experiment,’ still manages to stay fresh and exciting.

It’s the invention of new instruments, he mentions, that gives the project almost endless scope and variety. Trained in industrial design, Meinharter is well-equipped to consider the many ways in which vegetables can produce sound. He’s currently designing a ‘vegetable organ’ that uses white radishes for keys and carrots for flues. It’s proving difficult to get right but Meinharter and the rest of the orchestra are used to encountering these kinds of challenges. When you’re dealing with vegetables, he tells me, you’re dealing with organic matter that is constantly changing. Unlike with more traditional instruments, there’s more room for the unexpected to occur and more room for things to go ‘wrong.’ If an instrument snaps mid-performance, for example, or if an instrument ‘shrinks’ quicker than anticipated, then the performance has to accommodate that change. Under normal circumstances, these are indications of the performance taking a wrong turn ipso facto. But rather than thinking about these chance occurrences negatively, the Vegetable Orchestra welcomes them, sees them as instructive.

Something strange usually happens during the performance: the audience quietens and, gradually, there’s this realisation that these sounds form to make a ‘unique acoustic language.’

Experimentation is central to the orchestra’s ethos; only through experimentation and failure, Meinharter explains, did the orchestra’s sound grow and develop.  While over the years the ensemble has changed a great deal, the Vegetable Orchestra has never forgotten its roots. The work of Fluxus, John Cage, and other sound artists and groups, whose art exploits the contingencies of chance, are all important influences. This is an orchestra that identifies less as a group of musicians and more as a group of performance artists. ‘Yes,’ Matthias tells me, ‘artists… I think we see ourselves as performance artists. I don’t think you could do this project with a group of musicians.’

It’s an interesting point— that, as a classically trained musician, you gain a deep, thorough knowledge of your instrument. Your focus often lies in how to make a certain sound and how to recreate that sound as efficiently as possible. If you’re a violinist in an orchestra, you’ll be assessed on your proficiency to play the violin. But, by using vegetables for instruments, Matthias informs me, you end up learning and thinking about music in a slightly different way. Although Matthias is quite fond of his ‘leek violin’—as heard most prominently on the upbeat track ‘Transplant’ from the Onionoise album—it’s only called that to draw attention to the idea that leeks can be played like violins. They can also be torn, ripped, scratched, sucked, whacked, tapped…

And this brings us closer to Matthias’ response to my main question: why use vegetables?

Initially, audiences laugh. They find the spectacle of a group of people ‘playing’ vegetables quite amusing. But Matthias says something strange usually happens during the performance: the audience quietens and, gradually, there’s this realisation that these sounds form to make a ‘unique acoustic language,’ which invites the audience to think about the fact that we can make sound out of almost anything. And it’s in this sense that the Orchestra forces us to think about music from a different perspective. That is: all kinds of objects, which we might not immediately consider as instruments, are quite literally ripe for experimentation.

And yet, all this suggests that the Vegetable Orchestra is only interesting from a conceptual point of view. That’s not true. Onionoise (2010) is a genuinely enjoyable album. ‘Beat-oriented House tracks, experimental Electronic, Free Jazz, Noise, Dub, Clicks ‘n’ Cuts’: all these genres fuse to create an album that is as memorable as it is diverse.