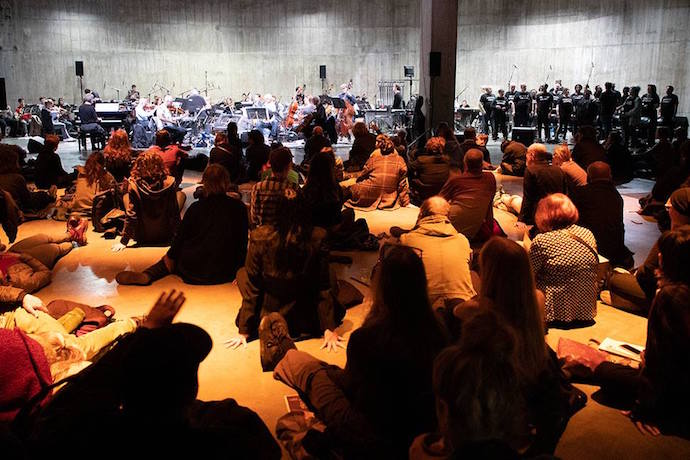 I first heard Gavin Bryars’ Jesus Blood Never Failed Me Yet at university. I remember it had a strong, strange effect on me then; it has a similar effect on me now.

The musical elements of the piece are not exactly anything to write home about. A recording of an old man singing a hymn loops over and over. His voice is unadorned and his melody is simple. An instrumental accompaniment, which grows gradually in size and volume, swells patiently. The chords outlined are decidedly modest. This pattern continues for the duration of the piece.

On paper, Never Failed Me Yet might seem tedious. In reality, it is anything but.

On 12 April 2019, it was performed from 8pm to 8am by people who are or have been homeless, Gavin Bryars and his ensemble, as well as a raft of professional orchestral musicians; this was the first time the work has been extended to such a length.

I stayed until 1:30am. Like a room dilating and contracting in proportion, every passing measure, marked by the slow advance and ebb of instruments and voices, and the unceasing repetition of the man’s song, ushered me further into the overall shape of the piece, drawing my attention toward details I hadn’t before noticed. I could focus in on the individual vocal quality of each choir member; marvel at the stunning effect produced when a string player, accidentally or otherwise, bowed their instrument closer to the bridge; ponder on the harmonic tensions that arose within the orchestra when certain members ceased playing for a moment, most likely to catch a much needed breath.

This luxury—being given the time and space to listen, to really listen—isn’t afforded by most music. Never Failed Me Yet is one of those rare exceptions.

I was surprised by the considerable size of the audience that gathered in The Tanks of the Tate Modern to witness this 12 hour rendition. The numbers dwindled as the night progressed, but far less than I had imagined they would. After all, 12 hours of music, even for the most adventurous, is a long listen. But, as night turned into morning, the work’s peculiar magnetic quality became clear. Some people cried softly, some slept, others watched intently to see how long the musicians would last. I don’t think anyone in that audience left not feeling moved in some way.

The endurance of the musicians, remarkable though it was, came second to the sensitivity of their playing. No note was overwrought. The chords were delicately balanced; the equipoise of the loudspeakers and the ensemble ideal. The choir was similarly brilliant, lending a hefty emotional weight to the performance. At times, one could make out the shimmying of an overzealous tambourine player somewhere toward the back of the room, but who could blame them? This was a performance that everyone could enjoy in their own way.

At a certain point, I think it was 1am, the orchestra receded entirely. The old man’s voice sang alone once more. A gentle quiet laid over the room. In that moment, I wasn’t sure what the words of the hymn meant individually to each person. All I knew was that we were witnessing something truly special.

Jesus Blood Never Failed Me Yet was produced by the Academy of St Martins in the Fields in partnership with Gavin Bryars, Streetwise Opera, Tate Modern, Southbank Sinfonia, The West London Mission and the Connection at St Martin’s