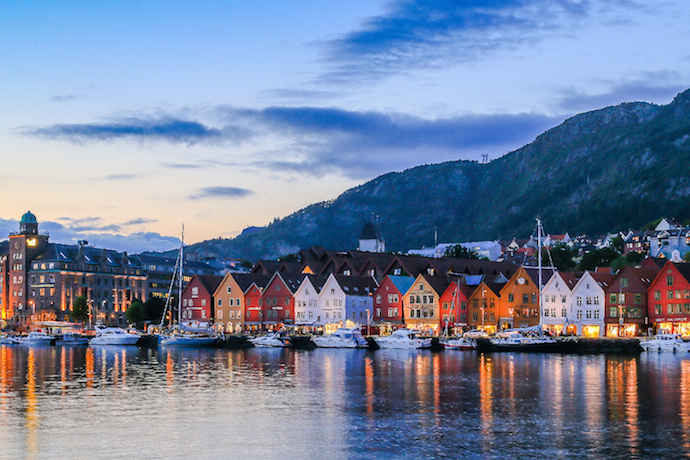 ‘Turn right at McDonalds and you will find Krispy Kreme’: a shop assistant put me out of my misery, as I stood, disorientated, in Bergen’s central shopping mall. And I was pathetically grateful, not because I was desperate for a doughnut (this being Norway, I couldn’t afford one), but because this spot was temporarily playing host to a promenade performance of avant-garde choral music.

That’s how things work at Borealis, a festival of experimental music held annually in Norway’s second city. Since launching in 2004, this week-long event has bent over backwards to confuse, bemuse and occasionally enlighten its audiences, and this year was no exception. Over a rain-sodden weekend I saw an underground bus tunnel transformed into a musical instrument; I stumbled into an electronica concert for mothers and infants; I braved the iciest of downpours to hear Espen Sommer Eide and Signe Lidén’s Vertical Studies: Acoustic shadows and boundary reflections, an electronic musical work nestled, outside the city, in a German military fortress.

Various performances were less interesting than their venues. After miles of beautiful fjords and lush forests, Eide and Lidén’s half hour soundscape was quite the anti-climax, consisting of a few, electronically manipulated, tones. Elsewhere, there were whiffs of pretentiousness: in the final concert, we were asked to write answers to pre-written questions, which were then typed up on a screen to an improvised soundtrack. Presumably the intention was to bridge the divide between performer and spectator. But the questions (does the festival director need a haircut? Is America exotic?) were too inane, the improvisations too amorphous to justify their hour-long duration.

But then, Borealis does not promise us a stream of  masterworks. It functions as a playground for contemporary music enthusiasts, and those willing to rummage will, in all likelihood, find quality. I did. The promenade concert turned out to be far more than attempt to piggyback on gimmickry. That’s partly because the Bergen Bergenylte Choir took pains to harness aspects of their environment: its acoustic generousity, its spatial potential (for several minutes the singers sailed up and down the escalators, allowing their harmonic formations to slide in and out of focus). And the works themselves – from six contemporary Norwegian composers – would have stood up in a traditional concert hall. There was real harmonic innovation in Tord Kalvenes’s Renaissance-inspired ‘La alt Bergen fare’, real rhythmic punch in Eilert Tøsse’s ‘BYEN ‘which straddled the divide between music and theatre. Best of all was Knut Vaage’s ‘Ke-de-gaar-i’ an assault course of a piece that pits speech, song, jeers, cat calls against an intermittently honking trumpet. Witty and dramatically pungent, it was a great showpiece for Vaage, whose music has yet to gain a strong foothold internationally. And it demonstrated why we need the kind of laissez-faire ethos that defines this brave festival.