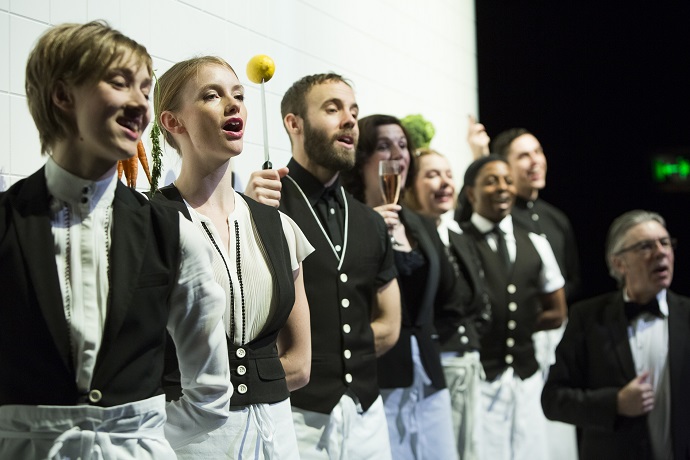 It was something of an exquisite torture, going to see Protein’s latest theatrical extravaganza. First we were held up by a fire alarm (the flambé chef’s doing, apparently). Then we were sat at tables festooned with fruits, canned goods and ornate spaghetti sculptures, while listening to lyrics designed to make us salivate. Finally we were fed a single cherry tomato. ‘Blink and you’ll miss it,’ the waiters warned us.

But then May Contain Food, a show for eight singer-dancer-actors, never billed itself as a substitute for dinner. ‘We performed another version last year which did involve serving a full-on meal,’ says the show’s composer Orlando Gough, ‘and that was very lovely, but it did derail the piece, because it takes a long time to serve a course and clear it away.’ What Gough and his co-producer, the choreographer Luca Silvestrini, were aiming for was a boundary-blurring interrogation of ‘that really neurotic relationship we have with food,’ as Gough puts it: ‘That obsession we have over where food comes from, whether it’s healthy, and the power dynamics of feeding somebody – be that a baby, an old person or a lover. But,’ he adds, ‘it’s also a celebration of the sacrament and glory of food.’

The result is a brainstorm of ideas, revolving around food, politics and sex. A Nigella doppelgänger sings about maple-cured bacon while spanking herself with a rolling pin. A family solemnly gives thanks for EU subsidies to the strains of Renaissance choral music. The dancers reimagine themselves as squawking farmyard animals before serving themselves up on a plate. In between we consume some very mediocre canapés under the guidance of the head waiter: ‘Listen to your tomato. Kiss your tomato. Rub it in your eye socket.’

It’s witty and brilliantly performed: for the most part the singers and dancers are indistinguishable. But the script, for all its humour, churns out tired arguments – about ethical farming; consumerism; the pros and cons of vegetarianism. And in embracing such a broad spectrum of ideas, it never does more than skim the surface. Something of a work-in-progress, then, though one with a lot of potential. May Contain Food could spawn a new trend of culinary-opera-dance-theatre, once cooked all the way through.