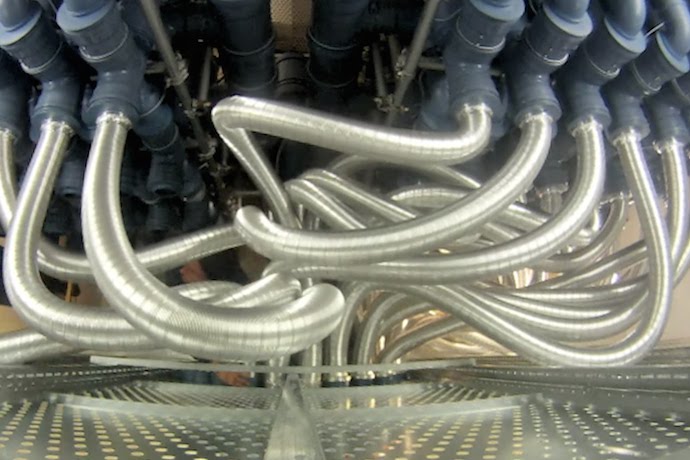 ‘So what first sparked the idea of building a smell-organ?’ I ask Wolfgang Georgsdorf. The Austrian interdisciplinary artist narrates the story of the first ‘pan flute’ of smells he made as a preschooler, playing with out-of-date medical remedies lent to him by his grandparents. ‘It was an igniting experience’, he says, the ‘first sequences’.

It was a long road, however, to Smeller 2.0, the machine which sits at the heart of his festival of storytelling with scents, which runs until 18th September in Berlin. Alongside a permanent running programme of scent-sequences, Osmodrama includes sound-scentscapes, film showings, workshops, readings and live improvised orchestral works.

Georgsdorf invented the Smeller in 1996, but it took sixteen years before the digital incarnation was born; an astonishingly precise machine which, organ-like, uses pipes to waft scents through the exhibition space in a particular sequence.

When one thinks about the possibilities, it seems strange that Smeller doesn’t already exist: a device which does for smells what a guitar does for tones – except, muses Georgsdorf, that smell is ‘not just a tone that ends at my eardrum. It’s an intrusion into the body. When you smell something, you’ve eaten it already’.

That might be one reason for audiences’ suspicion. Another is that smell can take us to places that make us feel uncomfortable, more powerfully than any other sense: into our memories and associations. Georgsdorf acknowledges this, but his is a playful outlook: he talks about the collection of 64 basic scents as though it were a paint-box, painting worlds that enter behind the eyes.

That idea of ‘worlds’ is taken quite literally in House Fugues, a piece that mixes sound and scent to recreate urban spaces: an airport, a railway station, a hotel lobby, a public swimming pool, a church. ‘It is a very convincing kind of virtual reality’, Georgsdorf says. Orchestral Whifftracks, by contrast, draws on the personal associations of the players, who respond musically to scents as they encounter them. ‘We want to find out what coffee, for example, makes us feel, and how we can articulate that with music. He believes that smells, like music, contain consonances and dissonances that can be exploited for emotive effect. And it is clear that Georgsdorf’s conception of this art form is as complex as that of any other. ‘We don’t want to create lava lamps’, he insists.